The Political Role of Animals in the Sierra del Lacandón, Guatemala 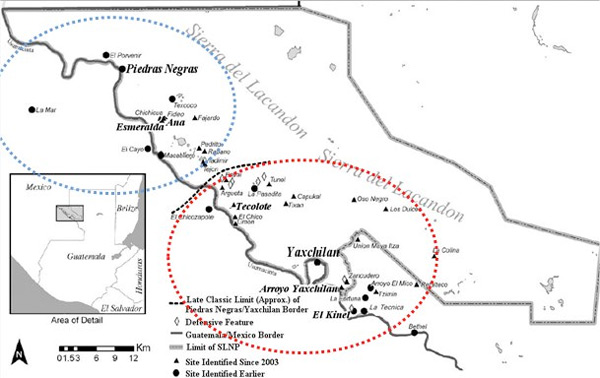 Animals were used for much more than just food in the past: in many Maya communities, the control of certain animal species played an important role maintaining social networks and hierarchal distinctions.The Sierra del Lacandón Regional Archaeology Project (SLRAP) is currently surveying, mapping, and excavating the territory on the Mexico-Guatemala border once occupied by two large Maya polities, Piedras Negras and Yaxchilan, so as to understand the history of this remote but fascinating region. The two polities rose to political prominence by the Late Classic period (550-850 A.D.), when the capital centers constructed numerous monumental temples, plazas, and stelae, while simultaneously engaging in a series of violent battles over territorial disputes. Although the capital sites of Piedras Negras and Yaxchilan have been investigated previously by archaeologists, many of the smaller subordinate communities have been overlooked until recently. SLRAP’s current goals include mapping the distribution and sizes of these smaller communities in order to determine how the site polities were arranged, how sites may have changed allegiance over time during border disputes, and how these peripheral sites interacted, both politically and economically, with the capitals.

The study of how animals were selectively acquired, distributed, and used based on zooarchaeological material provides a unique avenue to investigate sociopolitical relations. There are many questions left unsolved, including:

To answer this wide array of questions, we’ve implemented a number of diverse strategies to compare the zooarchaeological assemblages from each site through time. These methods include statistical estimates of diversity and equitability, comparisons of skeletal portion distribution among different contexts, and habitat fidelity analysis (Emery and Thornton 2008) to determine the environmental zones from which animals may have been acquired.Although we have only conducted a preliminary analysis (Sharpe and Emery 2015, Sharpe 2011), several intriguing patterns have emerged thus far. There is evidence marine species were transported in bulk to the two capitals, but rarely distributed to the smaller communities. The diversity of animals used or consumed by Maya elites was far less than that used by members of the middle class, although consisted of considerably more exotic and symbolically important species, such as jaguar and tapir. Elites also appear to have been distinguishing their diets from those of the lower classes by consuming proportionately more prime cuts of meat from the fore- and hindlimbs of deer. As we continue to investigate these trends exhibited in the zooarchaeological remains, we are learning increasingly more about how animals were purposefully used to create and maintain social ties throughout and between different communities.