The Environmental Archaeology Program maintains two types of zooarchaeological research collections. One, the reference or comparative collection, contains skeletons or shells of modern animal species used to identify zooarchaeological materials. The zooarchaeology collection houses samples of animal remains excavated from archaeological sites. These two collections are irreplaceable vouchers that document characteristics of animal species and provide evidence for a better understanding of conditions and economies of the past. As such they are given the best care possible to ensure their integrity. They are maintained under carefully climate-controlled conditions in a systematic storage system in association with all archived data, reports, and publications. 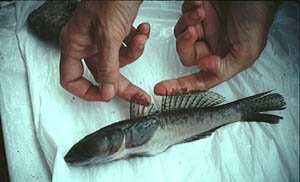 The collection of reference materials has to be done in full compliance with all laws governing the acquisition of such specimens. Sampling of plant and animal remains recovered from archaeological sites must also adhere to legal regulations and ethical considerations governing archaeological excavations.

With these precautions in mind, samples recovered from archaeological contexts are sorted according to broad taxonomic categories, then identified as specifically as the fragmentary nature of the shell or bone will permit. The data derived from the identifications and associated measurements are then analyzed to gain an understanding of what animals were used in the past, how they were captured, and what their presence in the site indicates about the environmental conditions that prevailed during the occupation of the site. The details of such analyses appear in reports on the archaeological sites and in papers in specialized journals. A book describing the techniques in this field of study is Zooarchaeology by Elizabeth J. Reitz and Elizabeth S. Wing, published by Cambridge University Press in 1999.

The reference collection of skeletons and shells is used for comparison with fragmentary remains excavated from archaeological sites. Measurement data from these specimens are used to correlate linear dimensions or the weight of the supporting tissue with the entire weight of the organism. Such correlations can then be applied to the archaeological remains to estimate the whole body weight of the identified animal and the potential amount of meat it could have provided to the human diet. 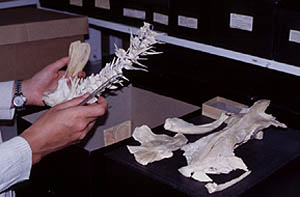 The collection includes over 12,000 specimens of southeastern North America and circum-Caribbean species of vertebrates and mollusks. The Florida Museum houses many other major animal collections that are used by zooarchaeologists as additional comparative materials. One of the major vertebrate groups of species in our reference collection is the fishes. It was judged to be the fifth largest collection of fish skeletons in North America (Poss and Collette, Copeia 1995). These specimens are catalogued in the Environmental Archaeology reference collection as well as the Ichthyology Collection. 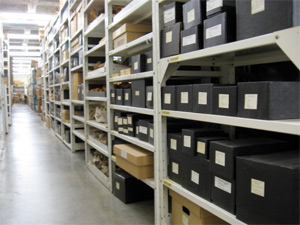 The zooarchaeological collection includes assemblages from over 560 accessioned sites that are organized by region: southeastern North America, West Indies, Middle America, and western South America. Of the accessioned sites 293 have been studied and catalogued. They include 98,000 catalogued entries of 3,006,000 identified specimens. The uncatalogued portion of the collection includes 179 assemblages that have not been studied or are in the process of being studied and 91 samples that were sent to us for identifications and then returned to the excavator or the country of origin once analyzed.

Two thirds of the catalogue data is in a customized Microsoft ACCESS data management system. The data management system was designed for us by William Paine (Florida Museum) and Timothy Young (UF student) and in part supported by a grant from the National Science Foundation #SBR 9511302. The system is a relational database that can be searched for various types of information such as the sites from a particular locale or the sites from which a particular species has been identified. In the near future we will add a complete bibliography of the references pertaining to the sites studied. As part of the zooarchaeological collection, we maintain the records and reports for each site.