The Traderscove site (8VO48) is located in Volusia County, Florida in a riverine/lacustrine environment where the prehistoric people would have had local access to both terrestrial and freshwater resources. Excavation of the site under the direction of Bob Johnson (Florida Archaeological Services, Inc.) recovered archaeological and zooarchaeological remains dating to the Archaic (8000 – 500 B.C.) and St. Johns II (750 A.D. – post contact) time periods. In 2002 Quitmyer and Thornton undertook analysis of the vertebrate faunal remains to explore temporal continuity and change in subsistence between these two time periods as well as to understand the site’s taphonomy and sample adequacy (Thornton and Quitmyer 2002). Invertebrate fauna were analyzed elsewhere. Thornton and Quitmyer’s identifications of 23,757 specimens representing 178 individuals and 41 vertebrate taxa revealed that local freshwater fish species such as sunfish, gar, bowfin, golden shiner, and catfish formed the basis of the prehistoric vertebrate diet in both periods. These taxa were likely obtained with the use of traps, nets, and hook and line. Terrestrial and mixed terrestrial/aquatic taxa such as white-tailed deer, rabbits, ducks, and pond and mud turtles were also exploited, but to a lesser extent. These could have been obtained using bolas, spears, or snares. Aquatic habitats, such as marshes, lakes and rivers were the focus of prehistoric subsistence activity, and marine resources were virtually absent. 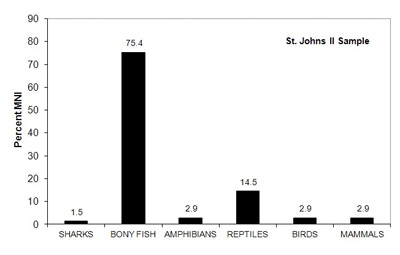 Thornton and Quitmyer’s other question was regarding temporal changes between periods of occupation. The faunal remains from Traderscove show relative continuity in subsistence from Archaic to St. Johns II times. Tests of similarity reveal these to be more than 89% similar. However, terrestrial mammals may have played a larger role in the site’s subsistence during Archaic times than during the St. Johns II period and conversely, the St. Johns II population appears to have exploited more snakes and aquatic turtles than the site’s Archaic inhabitants. A single shark element was recovered in the St. Johns II deposits suggesting at least some contact with the coast. Nonetheless, the productive riverine/lacustrine environment provided a diversity of easily exploited faunal resources that could be used on a permanent or seasonal basis during the years between 8000 – 500 B.C. and those between 750 A.D. – post contact time periods. The similar Archaic and St. Johns II subsistence patterns observed at the Traderscove site support Russo et al.’s (1992) reinterpretation of subsistence within the St. Johns River basin. Earlier research (e.g. Cumbaa 1976) overemphasized the importance of large terrestrial mammals to Archaic diet, while underemphasizing the contribution of freshwater fish and mollusks. In contast, Russo et al. (1992) hypothesize that the area’s aquatic vertebrate and invertebrate taxa have played an important role in the area’s subsistence from Archaic to later St. Johns time periods.This interpretation of animal use is affected by taphonomy and the recovery methods used. Thornton and Quitmyer found all samples to be well preserved with very little effects obscuring identification. However, vertebrate and invertebrate faunal remains were recovered by water screening 50x50x10 centimeter column samples through 1/4 and 1/8 inch gauge screen. Thus, smaller taxa such as killifish (Fundulus spp.) will be absent or under-represented due to the lack of finer gauge screen (i.e. 1/16 inch) sieving methods (Quitmyer and Wing 2006, Wing and Quitmyer 1985:57). In addition, their calculation of the rarefaction curve or the relationship of the number of species verses the minimum number of individuals (MNI) which represents one method of testing sample adequacy (Reitz and Wing 1999:108; Krebs 1989:331 ) revealed that neither sample is large enough to reach the point of diminishing returns or sample adequacy. This study therefore must represent only a preliminary review until further samples are recovered using fine gauge screening. Future excavations incorporating fine gauge screen and invertebrate materials into an analysis of sites along the St. Johns River will further contribute to the understanding of human subsistence strategies and the region’s resource base and possible changes in those over time due to cultural or environmental processes.

Cumbaa, Steve L. (1976) A Reconsideration of Freshwater Shellfish Exploitation in the Florida Archaic. The Florida Anthropologist 29:49-59.