Situated on Pine Island’s northwestern shoreline within the Charlotte Harbor-Pine Island Sound region of subtropical, coastal southwest Florida is the Pineland Site Complex, the archaeological remains of one of the great Calusa towns. Recorded as the town of “Tampa” on a map drawn by Alonso Solana dated 1683, it was a place characterized by two extensive shell mound complexes separated by an engineered central canal and large water court. Exiting the central court from its western edge, the canal continued across the island to Matlacha Pass, a stretch of two and a half miles. Two enormous sand mounds were outlined on the horizon when viewed from the shell mound complexes; these were surrounded by water bodies that were connected by lateral canals to the main canal. In the southeastern portion of the site complex are additional shell mounds and ridges (the latter composed of both shell midden, house floors, and sand layers) that date to earlier time periods. Tampa/Pineland was home to a politically and socially complex people whose livelihood in large part focused on fishing and shellfishing the shallow waters of Pine Island Sound.

Increasingly, climatic, geomorphological, and archaeological evidence indicate that their coastal environment fluctuated at temporal and spatial scales that impacted settlement and subsistence strategies. Now going on twenty-four years, research at Pineland continues to incorporate strong components of environmental archaeology. William Marquardt and Karen Walker are nearing completion (2012) of a large volume reporting detailed results of major excavations at the Pineland Site Complex, bringing together the work of multiple authors. Included are: a study of 1,900-year-old waterlogged squash, papaya, and chili seeds leading to a proposal of “homegardens” by Lee Newsom and Margie Scarry; a study of waterlogged wood and cordage by Newsom, Wendy Natt, and Robin Brown; a determination of year-round coastal settlement by Irvy Quitmyer who uses a variety of molluscan and finfish remains; studies by Sylvia Scudder and Carol Godwin of both human-influenced soils and geomorphic deposits; and a study of faunal remains by Susan deFrance and Walker indicating a variety of depositional conditions, collecting behavior, and environmental change through time. 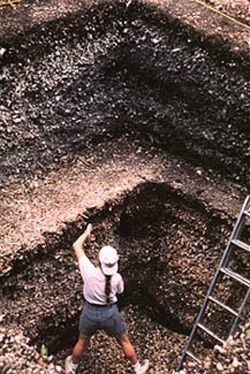 Today, a great portion, almost 70 acres, of the Pineland Site Complex is state- and county-owned and managed by the Florida Museum via its Randell Research Center, which is directed by William H. Marquardt. Onsite facilities include a Visitor’s Center with classroom, gift shop, and restrooms, an interpreted walking trail, and a nearby headquarters house (Ruby Gill House) with offices and labs, the latter including a small comparative collection of vertebrate and invertebrate specimens relevant to Pineland. The museum’s South Florida Archaeology & Ethnography and the Environmental Archaeology programs manage the Pineland collections and make them available for research and exhibits. Both Pineland and its extensive collections offer a wealth of research opportunities. For more information, contact Karen J. Walker or William Marquardt.