We have a wealth of information on sharks and shark bites here at the Museum, but here are some of the most common questions that we’ve been asked.

Of the over 500 different species of sharks found in the world’s oceans, only about 30 have been reported to ever bite a human.

Of these, only about a dozen should be considered particularly dangerous when encountered. The shark species responsible for most unprovoked bites on humans are the white (Carcharodon carcharias), tiger (Galeocerdo cuvier), and bull (Carcharhinus leucas). All sharks, large and small, are however predators and could be capable of inflicting wounds if provoked. They should all be treated with respect when encountered. 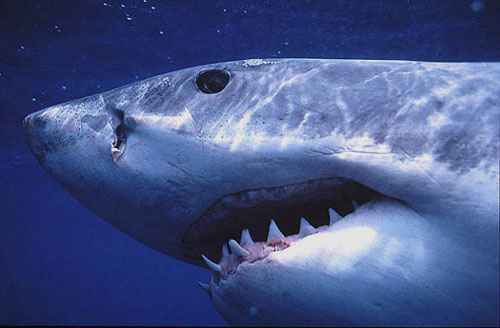 Humans have a fear for sharks that may be in part innately rooted in our past when we did need to be on constant alert for large predators.

More importantly, in today’s world we constantly are subjected to the media’s stereotypic characterizations of sharks, which are full of misinformation and actively promote fear and loathing.

Finally, we as humans are used to controlling the world around us – damming rivers, flattening mountains, shooting a charging elephant – but sharks, like typhoons, lightning and tornados, are something we cannot control, hence our great interest in them.

The chances of being bitten by a shark are very small (1:3.7 million) compared to other animal encounters, natural disasters, and ocean-side dangers. Many more people drown in the ocean every year than are bitten by sharks. The few bites that occur every year are an excellent indication that sharks do not feed on humans and that most bites are simply due to mistaken identity.

The Relative Risk of Shark Attacks to Humans

Worldwide there is an average of 70 unprovoked shark bites every year.

The number of bites had been increasing from 1990-2010 as a result of increased human populations, increased use of the oceans for recreational activity, and better reporting of shark encounters. As long as humans continue to enter the sharks’ environment, there will be shark bites. However, during the last decade bites have been decreasing, likely due to increased beach safety and public awareness.

Unprovoked bites are defined as incidents in which a bite on a live human occurs in the shark’s natural habitat with no human provocation of the shark. These represent the most natural examples of shark behavior and are our most widely used data category in research. These events include; mistaken identity hit and run during low visibility conditions, investigation, and on infrequent occasions predation. All of the data publically available on the ISAF website is from unprovoked incidents. This can take three forms:

Although the relative risk of a shark bite is very small, risks should always be minimized whenever possible in any activity. The chances of having an interaction with a shark can be reduced with these tips:

There is no way to completely eliminate the small risk of sharks. Shark exclusion nets, which form a barrier between sharks and humans with minimal damage to the environment, are an option. However, these nets are not 100% effective; entangle/ kill sharks and other marine life, such as sea turtles or dolphins; are very expensive to operate, and work only in low energy (non-surf) zones.

Individuals and organizations are working with new technology, such as drones or sensor buoys, to monitor sharks and other marine hazards at recreational beaches. These technologies will hopefully create safer options for both humans and animals.

People often assume that if someone was bitten in the ocean a shark was the only possible culprit. ISAF does thorough investigations of each case to understand the circumstances involved. Many times we find that other marine creatures were the culprit. Common perpetrators include stingrays (AKA flat sharks), moray eels (Muraenidae), bluefish (Pomatomus saltatrix), and barracuda (Sphyraena spp.).

No. Rogue sharks are fictional depictions of sharks that develops a taste for people, like in “JAWS, 1975”. There is no scientific evidence that individual sharks repeatedly bite or hunt humans. The false idea of rogue sharks or “problematic individuals” is still unfortunately pushed by popular culture and media.

To date, there is no scientific evidence that sharks are affected in any way by sunscreens. There is ongoing research on whether sunscreen chemicals can damage corals. Additionally, some sunscreen actually use shark liver oil as an ingredient.

Killer whales or orcas (Orcinus orca) have been documented to kill white sharks (Carcharodon carcharias) and only eat their livers. However, cetaceans (whales and dolphins) and sharks often hunt side by side without conflict. So all because dolphins are jumping off the beach does not mean sharks are not present. Check out this video from the BBC about ocean predators, large and small, feeding on sardines HERE.

Tips to help keep you and your family safe this summer:

Gavin Naylor, director of the Florida Program for Shark Research at the Florida Museum of Natural History, provides five tips to avoid the chance of being bitten by a shark.

How to avoid shark attacks

While the chance that you will be bitten by a shark is very small, you can take steps to minimize your risk. Ten-year-olds Luke and Sophia created this video to help you stay safe in the water.