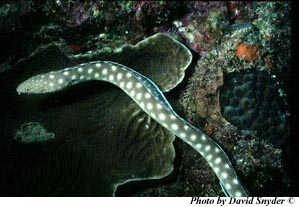 Eels and other snake-like varieties of fish swim by pushing themselves in a wave-like fashion through the water. Their movement through the water is similar to a snake moving on land. This is a relatively slow type of locomotion and a good deal of energy is needed to propel (move) the fish.

Fish with streamlined bodies and a stiff, crescent-shaped caudal fin or tail, tend to move rapidly through the water by swishing their tail from side to side. This action propels the fish much like sculling (rowing a boat with an oar) propels a boat. 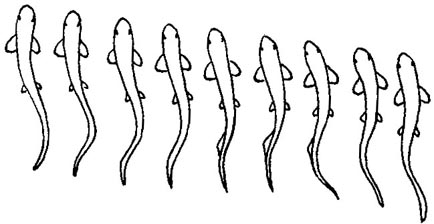 The caudal fin or tail is not the only fin a fish uses to swim. For example, the pectoral fins, which sit almost horizontally on the body of rapidly swimming oceanic fish, along with the pelvic fins, play an important role by acting as stabilizers to prevent the fish from rolling as it moves through the water.

In fish that tend to move much slower or do not swim for long distances in a straight line, the pectoral fins are set almost vertically. The pectoral fins along with the pelvic fins help the fish by acting as brakes and can assist the fish with difficult maneuvers.

This is very useful to fish that live in rocky or coral areas, with a need to chase prey around corners or to make short, sharp turns in order to escape from an enemy. Two examples of these fish are the butterfly fish and the damselfish. Some fish actually use their pectoral fins almost exclusively for swimming. Three examples are the filefish, trunkfish, and the puffers.