This picture shows three common types of teeth that can be found in many of the different species of bony fish. The first type of tooth shown, the canine, is typical of most carnivores. The canine is a long tooth that is generally shaped like a cone and is either straight or curved. These teeth are used for piercing and holding the fish’s food, much like the canine teeth found in dogs or humans. The second type of tooth depicted, the molar, is generally found in bottom dwelling fish such as skates and chimaeras. They are flat, broad teeth used for crushing and grinding food like mollusks. The third diagram shows incisors. Incisors are used for cutting and they come in a variety of all different shapes that range from the same shape as human incisors, to the shape of a saw-edge or even fused into the “beak” of a Parrotfish like the fourth diagram in the picture shows.

Where Do You Find Teeth In Fish?

Depending on the species they can be found in the…

How Did Teeth Initially Develop?

Based on living sharks (Squaliformes, such as dogfish), teeth are originally thought to have developed from scales covering the lips. This is because the individual placoid scales on the sharks can be seen visibly grading into teeth on the jaws.

Some Interesting Types of Special Teeth

Villiform teeth are elongated teeth that are very long and fine and are used for stabbing and direction. They are more common on deep see fishes such as this black dragonfish: 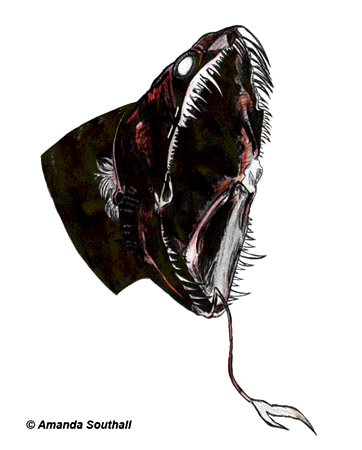 The moray eel is interesting in that its pharyngeal teeth are modified. The eel is able to swing these teeth forward from its throat to grab on to its prey and move it down the eel’s throat (kind of like in the movie “Alien”).

Another example of an interesting tooth type is found in the cookiecutter shark. The way this particular shark feeds in combination with how its mouth is designed gives this shark its unique name, as seen below:

The jaw of a spotted eagle ray shown below has a perfect example of teeth used for crushing shellfish including clams, oysters, and whelks. 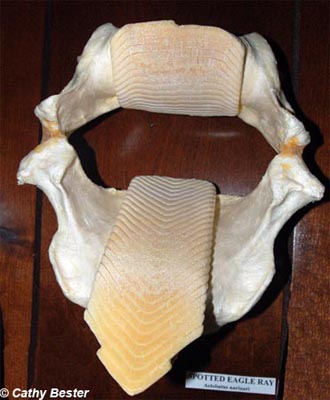