Water covers over three-quarters of the earth’s surface. Fish live in this world of water and are the most numerous of the vertebrates, or animals with backbones. There are three major groups of living fish. 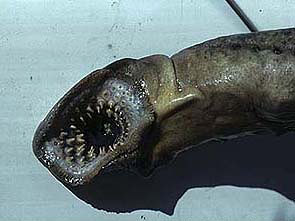 The first group is the Superclass Agnatha. This group is the most primitive of the three groups of fish. The fish belonging to this group have no jaws. Their mouths are like holes in their heads that lack movable parts.

This group is the earliest to appear in the fossil record. Examples within the fossil record date back to 500 million years ago, in the late Cambrian period, and were most common 410 million to 345 million years ago during the late Silurian and Devonian periods. Members of this group were generally small and heavily armored and lacked paired fins. They moved along the bottom of the sea where they preyed upon a variety of arthropods. Their gills were quite large and served as food filters and as a respiratory organ. The only surviving agnaths today are lampreys (class Cephalaspidiformes) and hagfishes (class Myxini). Lampreys and hagfishes are slimy; they completely lack scales or armor and are long and eel-like. The living representatives of this group survive as parasites and scavengers on other fish.

The sharks, rays, and chimaeras make up the second group of fish, the Class Chondrichthyes. Sharks are one of the earliest known jawed fishes. They have an upper and lower jaw made of cartilage. You and I have two sets of teeth while a shark has an unlimited supply of teeth. Sharks have an unlimited supply of teeth because damaged or lost teeth are continually being replaced with new teeth.

Rays have enlarged pectoral fins and a well-developed rope-like, thin tail, which ranges from short to long in length.

A major difference between sharks and rays is that rays swim by wave-like motions made with their wings, or pectoral fins, and sharks swim mostly by the action of their tails.

Another difference between sharks and rays is that rays have mouths on the underside of their body with flattened teeth. Because most rays are bottom feeders and their mouths are facing downward, they must change their way of breathing (respiration) to avoid sucking up bottom muck or mud. They bring water in through holes called spiracles located on the top of their head. After the water passes through the spiracles, it is passed over the gills and gill slits.

Another member of the group chondrichthyes is the chimaeras. Chimaeras are more fish-like with soft bodies and no scales. They have three pairs of beak-like teeth in their mouth. Most chimaeras live near the bottom of the ocean floor. The group chondrichthyes survives today and is represented by about 165 living genera and 960 living species of sharks, rays, and chimaeras.

The third major group of fish is the Osteichthyes or the true bony fish, which is divided into two classes. The first class is the more primitive of the two classes and is called the Sarcopterygii. This class contains fish such as the coelacanths and the lungfishes along with all terrestrial vertebrates from cows to humans.

The second class is the Actinopterygii and contains fish such as gars, sturgeons, bowfins, and the very large group of fishes known as the telelosts.