Military skirmishes and encounters between Spanish and English forces (and their respective Indian allies) over control of the area between Charleston and St. Augustine began almost as soon as Charleston was established in 1670, and they escalated dramatically through the eighteenth century.

Most of the remaining frontier missions, and St. Augustine itself, were burned down during the sieges of Carolina governor James Moore in 1702 and 1704. By the end of first decade of the new century, Spanish activity in East Florida was restricted to St. Augustine.

One of the most aggravating aspects of the conflict for the English colonists was the role taken by their African slaves. Africans who escaped from English plantations were given sanctuary by the Spaniards in Florida, to the outrage of their former owners.

The first African refugees arrived in 1686, and by 1738 their numbers were sufficient to form a free black militia, settlement and fort a few miles north of St. Augustine, known as Gracia Real de Santa Teresa de Mose. They represented a first line of defense for St. Augustine against English raiders. 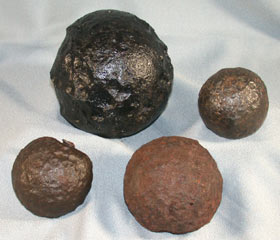 These cannonballs were excavated at St. Augustine house sites, probably shot during the Moore and Oglethorpe sieges of the town. 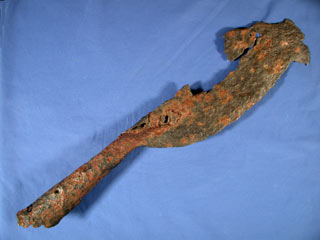 The iron blade of this fascine knife – a sort of hooked machete – was found at the home of the eighteenth century Sergeant Major of St. Augustine, Francisco Ponce de León. It would have been useful both for cutting fascines (bundles of sticks) used in temporary entrenchments in battles, as well as for cutting materials to rebuild St. Augustine’s houses after they were destroyed by Moore. 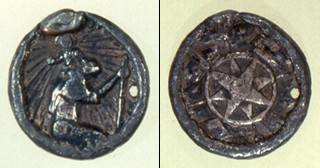 This hand-made silver medallion shows St. Christopher—the patron saint of travelers—on one side, and a mariner’s compass rose on the other. It was found in the creek next to Ft. Mose, and may have been used by a man of Mose for protection in travel, battle or on the water. St. Christopher was the most common saint to which black religious confraternities in Havana were devoted. 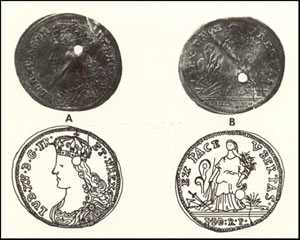 Copper alloy commemorative or peace medal, showing Louis XV of France on the obverse and Peace and Liberty on the reverse, found at the home of Private Gerónimo de Hita y Salazar. These medals were routinely distributed as gifts to American Indians by representatives of European monarchs, and the story of how it made its way to Private de Hita’s back yard remains, regrettably, a mystery. 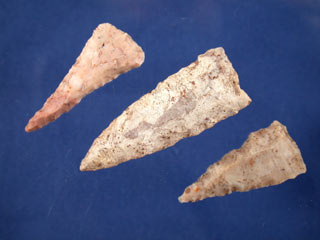 Although firearms were the preferred weapon of choice, it is probable that at least some of the Indian allies (and enemies) of the Spaniards in St. Augustine fought with bows and arrows. These small chert projectile points are common in eighteenth century sites in and around St. Augustine. 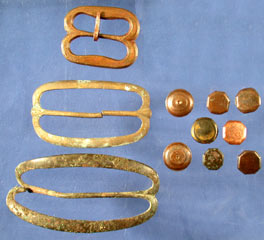 By the eighteenth century Spanish regiments had standard-issue uniforms. These brass buttons are found very commonly in eighteenth century St. Augustine sites, and are probably uniform buttons. The large buckles are from grenadiers’ bandoliers or baldrics, leather belts worn diagonally across the chest and around the waist to hold ammunition and insignia. 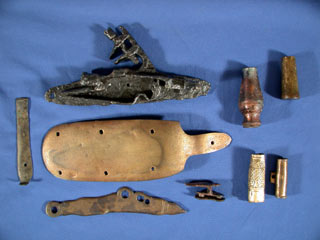 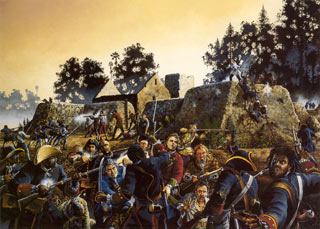 The siege of St. Augustine by Oglethorpe in 1740 was dealt a fatal blow by the Spanish, African and Indian forces who defeated the British occupying Fort Mose.

After the settlement of Charleston by the English in 1670, the region between there and the St. Mary’s river were claimed by both Spain and England – “the debatable land.” 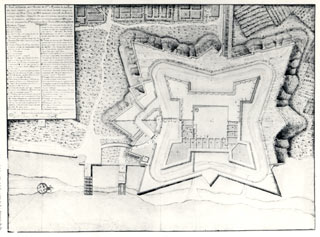 The Castillo de San Marcos, finished in 1695, was the last of nine Spanish forts in St. Augustine, and the first built of stone. It has never fallen to enemy forces. 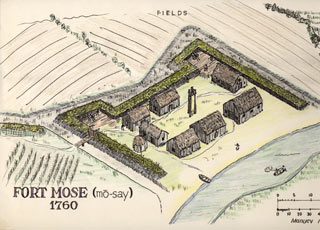 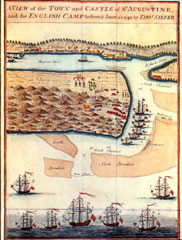 Francisco Menéndez was a Mandinga born in West Africa in 1704. He was captured and sold into slavery to an English planter in the Carolinas sometime before 1720. He escaped, and fought with the Yamassee Indians against the English for several years. In 1728 Menéndez arrived in Florida in the company of Yamassee Indians, but despite the King of Spain’s 1693 proclamation “giving liberty to all,” Menéndez and 30 other escaped Africans were enslaved. Although a slave at the time Francisco became the Captain of the town’s black militia, and petitioned the crown for his and his compatriot’s freedom. This was granted in 1738, and Menéndez became the Captain of the Mose militia and the governor of the newly-found settlement of Mose, a position he held until his departure from Florida in 1763. During the interlude between the destruction of Mose by Oglethorpe in 1740 and its rebuilding in 1752, Menéndez hired on as a privateer on Spanish corsair ships. He was captured and tortured by the English, but escaped to write an account of his ordeal, and resume his leadership of the Mose community.

Gerónimo was born into a prominent St. Augustine criollo family in 1706. He was the son of Adjutant Don Pedro de Hita Salazar and one of thirty-two grandchildren of the peninsulare Governor Pablo de Hita y Salazar, who had settled in St. Augustine when his term ended in 1680. By the time Gerónimo reached adulthood, the rules against admitting criollos to the St. Augustine garrison had relaxed, and the deteriorating military situation required more men. Gerónimo was admitted to the garrison in 1734 at the age of 28 as a cavalryman ( a more prestigious and better-paid branch of the service than those of infantry or artillery). Two years later, he married a young criolla widow, Juana de Avero, six days after the birth of their first child, Eugónia Basilia. Juana and Gerónimo had three more daughters and one son before they left for Cuba in 1763. Gerónimo’s was not a career of distinction. After 18 years of service, he remained a private, although he was, after the mid-1750’s, commandant of the black garrison at Fort Mose.

Chief Francisco Jospogue was a Guale Indian, born shortly before 1670 near St. Catherine’s Island, in Georgia. He was chief of his village when English and Yamassee attacks forced the Christian Guale to migrate to St. Augustine, where his people settled at a mission town called Nombre de Dios Chiquito. In 1715, his wife and four children were captured by Yamassee Indians during one of the many English and Yamassee raids on the Indians of St. Augustine. Three times the English offered to return Chief Francisco’s family to him on the condition that he ally himself with the English and renounced Catholicism. Three times he refused, and his family was separated and sold into slavery. By 1717 Francisco was the leader of the village of Nuestra Señora de Candelaria, a village of heathen Yamassee Indian refugees, and before 1728, he remarried. His wife, Agustina Pérez was a mestiza, and gave birth to their son Miguel in 1728. By 1734, Francisco and Agustina had moved into town, living in a tabby house on St. George street. (Parker diss 57-59).

Back to Timeline Next → Growth & Diversity