About 300 people lived in the town site that was established to the south of the present-day St. Augustine plaza in 1572. Most of the residents were soldiers and their dependents.

The colony was not profitable for Spain, but St. Augustine’s economy was subsidized by the crown because of the town’s strategic position in guarding the route of the Spanish treasure fleets, and also because it provided a safe haven for shipwreck victims and a base from which to salvage wrecked ships’ cargoes.

Disaster struck repeatedly during this period.

A garrison mutiny in 1570 destroyed the fort on Anastasia Island. By 1572 the rebuilt fort was eroding into the sea, and a new town and fort had to be built again after the move back to the mainland in 1572.

Many of these new houses were made of wattle and daub, which employed a framework of wood over which clay was plastered. In 1577 Indians attacked the settlement and burned many of the houses.

The entire town and fort were destroyed again in 1586, when the English privateer Francis Drake burned St. Augustine to the ground (fortunately making a map of the town before he did so). Drake’s threats to Santa Elena in the same year resulted in the permanent abandonment of that settlement, and the relocation of all its population to St. Augustine in 1587.

St. Augustine was rebuilt yet again, after Drake’s attack, this time mostly of board and thatch construction. In March of 1599 a disastrous fire swept through the town, igniting the wood and thatch. And in September of the same year, the rebuilt and still-damaged buildings suffered severe flood damage from a major hurricane. 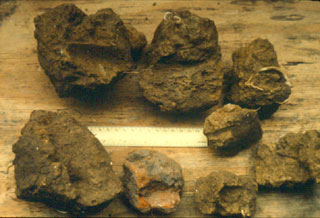 These fragments of clay daub walls survived because the building was burned, firing the clay and preserving the impression of the wood wattling.

Matchlock muskets were the most common weapon in the defense of St. Augustine during the sixteenth century. This lock from a matchlock may have been made in St. Augustine at the end of the century. 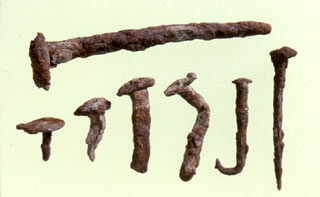 Hand-wrought iron nails and spikes are some of the rare physical traces of St. Augustine’s sixteenth century buildings that have survived in the ground.

Soldiers carried their gunpowder in special containers with lids and spouts that measured out a charge at a time. This iron lid shows the spout hole and lever for measuring charges. 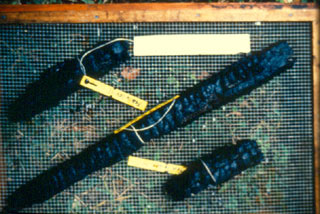 These burned cedar posts were preserved in a well filled with late sixteenth century debris. They were possibly part of the clean up effort after Francis Drake’s burning of St. Augustine in 1586. 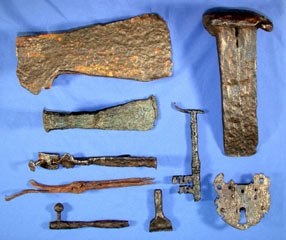 Hand-wrought metal tools used in construction and rebuilding were imported during the early years of the settlement, when blacksmiths were few.

The sixth fort, San Juan de Pinillo, drawn by Baptiste Boazio and destroyed by Drake in 1586. 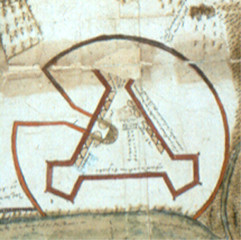 A sixteenth century fort of St. Augustine, depicted in a Spanish map. 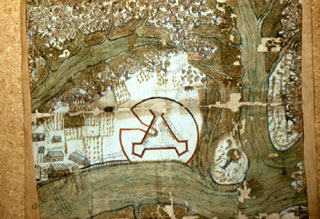 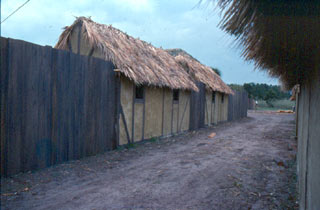 A reconstructed wattle and daub house, of the kind probably in St. Augustine about 1580. It was reconstructed on the basis of archaeological remains. 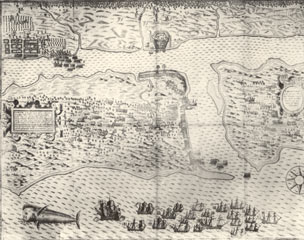 This map, made in 1586, is the earliest known representation of St. Augustine. It was drawn by Baptiste Boazio, an artist who accompanied Francis Drake’s raiding and privateering expedition of 1586, fortunately before Drake destroyed the town. 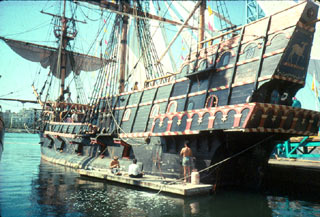 Francis Drake’s ship during many of his pirate raids was the infamous Golden Hinde, shown here in this 20th century replica.

Miguél was a Basque carpenter and sawyer from Vizcaya. He had joined the Royal Armada in Spain, but deserted. As punishment, he was sent to St. Augustine in 1573 to serve 3 years in the military. Since the town’s population was predominantly male, most of the households were made up of groups of soldiers. Miguel’s group included three others who moonlighted in the building trades, including Santos Hernández from Carmona who was a cord and rope maker as well as a sawyer; and Blás Hernández from the Canary Islands, who was a carpenter and a gunner. Their services were undoubtedly in great demand during this time of building and rebuilding. (Manucy 1999:88)

Back to Timeline Next → The Church and the Missions

Notes: A detail-rich translation and commentary on the trials held to determine St. Augustine’s fate in 1602.

Notes: An account of Francis Drake’s raid on and burning of St. Augustine in 1586.