As the number of soldiers sent to St. Augustine’s garrison increased, the demand for housing also grew. The area between the plaza and the Castillo was settled mostly during the time after 1670.

It seems that much of the property in St. Augustine was held and passed through women, since by the eighteenth century, virtually all of the full-time resident women in St. Augustine were criollas. Most of the men, however, were transient soldiers, often from Spain.

Houses were part of the criolla dowry, helping young women to make an advantageous marriage—ideally with a military man from Spain—and at the same time providing a place for the incoming men to live. Many of these men stayed in St. Augustine to raise families and form business ventures with other peninsulare men.

After the destruction of the town by James Moore (and again after the destruction of most of the town by a hurricane in 1707), many of the properties owned by criollo families were gradually rebuilt of masonry—coquina, a shellstone quarried on Anastasia Island, or tabby—a cement-like mixture made with shells. St. Augustine had entered the “stone age.”

Life in these houses—whether rich or poor—featured a mixture of Indian, African and European and non-European traits in areas of female domestic activity (an adaptation to Florida by the resident criollas, mestizas and mulattas) but a strong adherence to European items in male activities, and matters of public display. St. Augustine was Spanish on the outside, but multicultural on the inside.

In 1711, a St. Augustine criolla girl named Francesca María García de Acevedo de Peñalosa married Victoriano de Avero, a peninsulare soldier from Tenerife in the Canary Islands. Francesca and Victoriano had five daughters, Ildefonsa, born in 1713, Juana, born in 1715, Antonia, born in 1717, Manuela, born in 1719 and Ursula, born in 1723. They also had one son named Francisco who was born in 1721 and died (as so many St. Augustine children did) in infancy. Five of the girls married newly-arrived soldiers; Ildefonsa and Juana to men from the Canary Islands, who both died before their wives did. Both women remarried local criollo men—Juana to Private Gerónimo de Hita y Salazar. Antonia married an officer, Captain Joseph Guillén from eastern Spain, who was also a shrewd merchant. She, too became a widow after eight years of marriage, and remarried in 1753 to the socially prominent Joaquín Blanco, the Keeper of the Royal Storehouse. Ursula married a Spanish-Italian Cavalry lieutenant from Sicily, who died in 1746, and she subsequently remarried to another peninsulare officer, Raymundo de Arrivas. Manuela was the only one of the girls to marry a local criollo man from St. Augustine.

When St. Augustine was evacuated by the Spaniards in 1763, the map of properties made by Elixio de la Puente showed a cluster of homes on north St. George Street that were occupied by the Avero girls and their families, an example of the tradition of passing property through criolla women, and the acquisition of property through advantageous marriages.

The experiences of Ildefonsa, Juana, Antonio, and Ursula—as well as that of their mother—was typical for criolla women in colonial St. Augustine. They all married at between ages 15 and 17, ideally to peninsulare soldiers. They were all widowed, they all remarried, and they all had many children—usually one every other year. Ildefonsa and Juana each bore seven children, Antonia had at least six, and Ursula had eleven children. Their mother Francisca, who also remarried after the girls’ father died, gave birth to more than ten children in her lifetime. The St. George street blocks of the Avero girls enclave on St. George Street must have been a lively place indeed as their children grew up with their siblings and cousins. 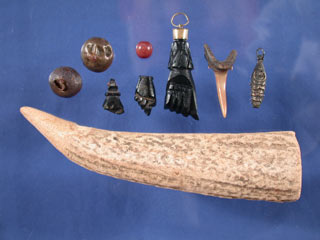 Protective amulets for children were used throughout Iberia and the Spanish colonies. They were intended to protect them from the evil eye (jet, higas, animal horns and coral), aid in teething (amber), to ward away demons (bells) , staunch nosebleeds and vomiting (coral), help them learn to speak (fish), protect against the evil eye, aid in lactation and aid in teething (animal claws and teeth), and protect them from bites of poisonous creatures (deer horns). 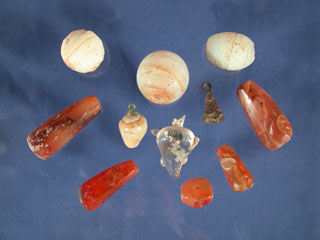 glass heart may have been used as a love amulet, or as a lagrimario- a tiny receptacle to catch wept tears, sometimes used by Spanish women as a rebuke to a callous lover. 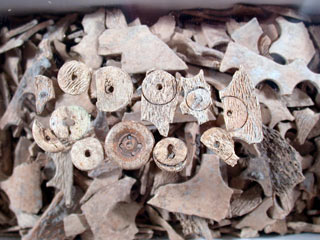 As buttons became widespread and common in eighteenth century clothing, the households of St. Augustine often made their own. The single holed discs were made as backings for the more durable imported metal tops. Some families may have made buttons as a cottage industry, like the residents of the site at which all these manufacturing fragments of button backs were found. 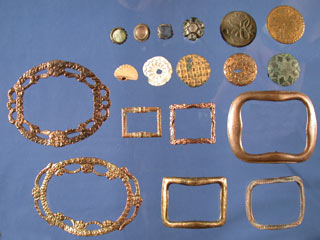 With the ascendance of the Bourbon dynasty to the Spanish throne after 1702, French fashions dominated the clothing and personal ornaments of Spain and the Spanish colonies. This, combined with the wider availability of foreign imports in eighteenth century St. Augustine, dramatically changed the appearance of the town’s residents- at least the well-to-do residents. Clothing was both fastened and ornamented with buttons, often quite elaborate. Shoes, belts and knee britches were fastened with buckles. Most of these found in eighteenth century St. Augustine were produced in England or France. 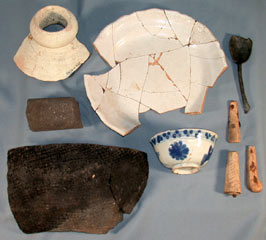 The blending of Indian and Spanish elements in the households of St. Augustine that began in the sixteenth century continued (and intensified) through the eighteenth century. This is a typical kitchen assemblage for both poor and rich households , and includes Guale Indian cooking pot fragment, a Mexican Indian basalt mano for grinding corn, and a Spanish olive jar favored for the storage of liquids. In the dining room, however, most families ate off of European glazed plates using bone or metal utensils. 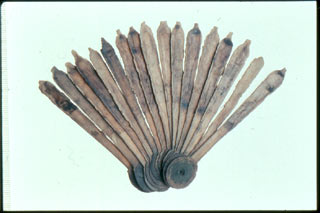 This set of ivory fan sticks was recovered from the 1724 wreck of the El Conde de Tolosa shipwreck in the Dominican Republic, and illustrates the typical eighteenth century woman’s fan used by women in St. Augustine. 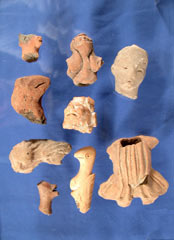 Small animal and human figures modeled of clay are frequently found in St. Augustine sites. They may have been intended as toys, ornaments or curiosities, and some may have been used as devotional objects. Some of them seem to be molded in local clays, and were possibly Indian-made. 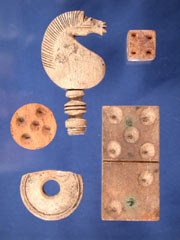 Entertainment in the households of eighteenth century St. Augustine included games of chance, using dice, and such board games of strategy as chess, backgammon or checkers. 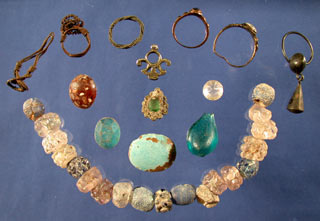 Jewelry worn by Spanish women and girls in eighteenth century St. Augustine included finger rings, necklaces, earrings and hair ornaments of metal and beads. Many of the eighteenth century pieces were from England or France, and most were of humble materials. 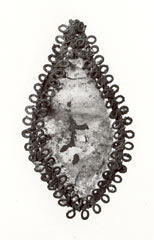 Much of the jewelry worn in the Spanish colonies had both religious significance and ornamental value. This mid-eighteenth century pendant is made of 2 sheets of mica enclosing a piece of fiber, framed by wound copper wire. It may have been a reliquary pendant, possibly made locally. 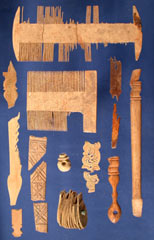 Fans were the ubiquitous accessories of Spanish and Spanish-American women throughout the colonial period. In St. Augustine, however, we don’t find archaeological evidence for fans until the eighteenth century. Double sided bone combs were also used in the eighteenth century—one side for combing the hair, and one for removing lice. 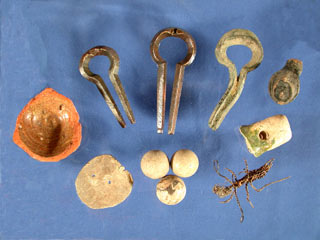 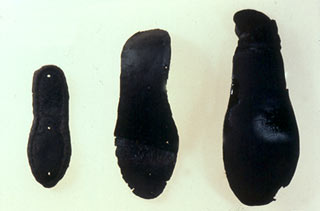 Direct evidence for clothing is found only rarely in archaeological sites, owing to the perishable nature of cloth and leather when it is buried. These leather shoe soles from eighteenth century shoes were preserved in a well at the home of harbor guard Antonio de Mesa (the water preserved the leather). De Mesa had seven children, and some of their shoes—as well some of their their parents’—may have been thrown away in the well when they could no longer be handed down. 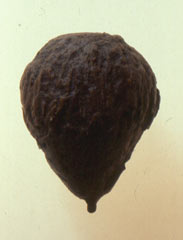 Infant mortality was high in colonial St. Augustine, and medical care was poor. Women tried to protect their newborn babies with amulets designed to ward off the evil eye, and protect against other various ailments. The women themselves also used amulets to aid in lactation, and staunch the flow of blood during childbirth. 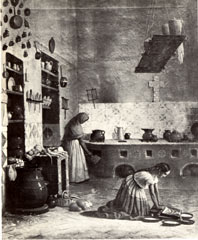 This scene of an eighteenth century kitchen in Mexico shows many of the characteristics of St. Augustine’s kitchens. 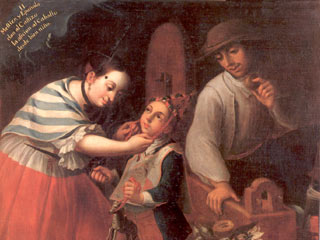 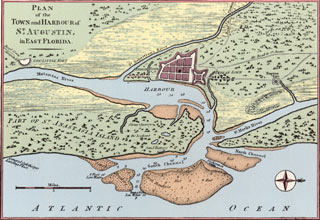 Back to Timeline Next → Desperate Entrepreneurs