After the Spanish exodus St. Augustine was repopulated by British soldiers, planters and loyalists from the other English American colonies. The population of St. Augustine grew dramatically after the beginning of the American revolution, as British loyalists fled to Florida, which was one of the few remaining sanctuaries.

A large group of Minorcan farmers and fishermen also arrived after 1777, refugees from a failed colony at New Smyrna in Florida. Several hundred Indians of Creek origin, who were by then called Seminoles, also came to St. Augustine, many of them settling in the abandoned mission villages around the city.

The African population also grew, and several hundred enslaved laborers of African origin, and a smaller number of free black and mixed-blood artisans and laborers lived in St. Augustine during the British occupation.

A great many African slaves escaped and fled to the Florida interior to live with Creek-Seminole Indian groups. St. Augustine was a polyglot, multi-ethnic community, but with the English firmly seated at the top of the social and economic ladders. 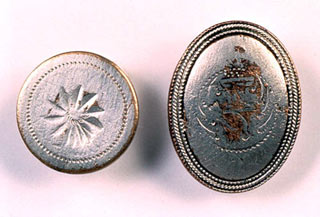 British gentlemen (and officers) wore cloaks and long coats adorned with elegant silver buttons like these, which were excavated from the St. Francis barracks site. 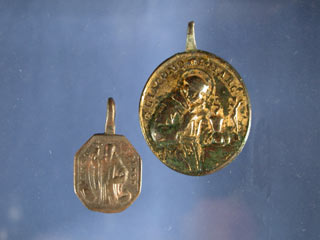 With the arrival of the English in 1764, Protestantism was practiced for the first time in Florida. The Minorcan colonists who arrived in 1777 however, remained staunchly Catholic, owning the few rosaries and religious medallions present in St. Augustine at that time. These medals were excavated at the house site jointly owned by Francisco Pellicer, the leader of the exodus from New Smyrna, and José Peso de Burgo, his partner and a prosperous merchant. The St. Benedict medal is identical to one found at the site of the New Smyrna colony. 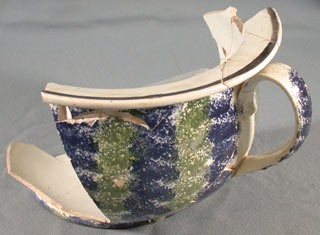 Although the British residents set about at once to dig latrines and privies in their yards, they still also used chamber pots. The English chamber pots were of a different form than the tall, narrower ones of the Spanish period. Once introduced by the English, the tradition of outdoor latrines in St. Augustine persisted until the introduction of indoor plumbing in the last century. Although this chamber pot dates from the Second Spanish period (1784-1821), it is of the shape and appearance of those used by the English. 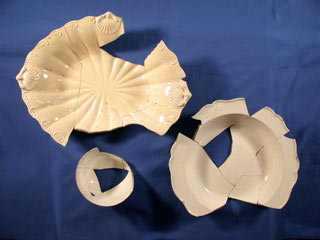 In 1762, the English pottery maker Josiah Wedgewood patented this refined, lead-glazed, cream-colored earthenware. It was an immediate and huge success, and quickly supplanted the delftware and stoneware that had previously dominated English tables. Because it began to be replaced during the 1780s by a bluish-white refined earthenware known as “Pearlware,” Creamware provides one of the best archaeological markers for the British Period in St. Augustine. The plate and bowl shown here are from Governor Grant’s residence and may have been used by him or the other British period governor, Patrick Tonyn. 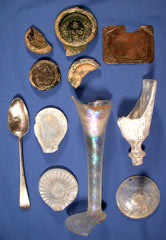 For some of the elite English residents, St. Augustine was a lively and entertaining place to be, particularly at the beginning of the British period when Governor Grant entertained lavishly. Parties with dancing, fine food, and plenty of claret, sherry, port and rum were enjoyed by those of sufficiently high social rank to be invited to the Governors’s mansion. 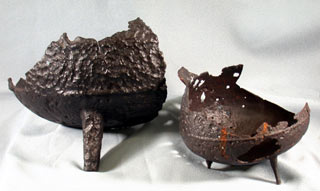 Although iron cooking pots were used on occasion (when they were available) in Spanish St. Augustine, the Spanish residents preferred cooking in Indian pots. The British colonists arriving after 1763, however, were unaccustomed to Indian-influenced cooking techniques, and preferred iron kettles. 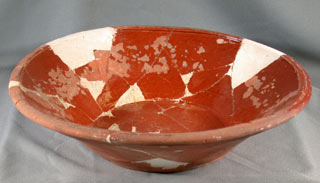 This lead-glazed, coarse earthenware basin was the typical domestic basin form for washing and mixing in late eighteenth century St. Augustine. It was found in a British-period context at the site occupied by the Bartolomé Usina family, and was probably used for their domestic chores. 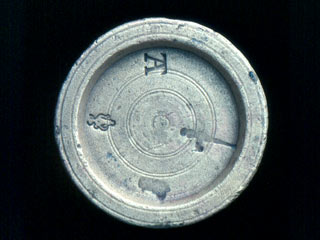 Planters and the merchants who handled their products were the economic core of British St. Augustine. This scale weight from London was typical of those used in trade during the second half of the eighteenth century. (The dagger is the symbol of the London Guildhall before 1826; and the pitcher or ewer symbol represents the Founders Company (guild) before 1826. The “A” indicates that it is the avoirdupois (rather than troy) weight system SA12-26-2.012, diameter 6.6 cm) 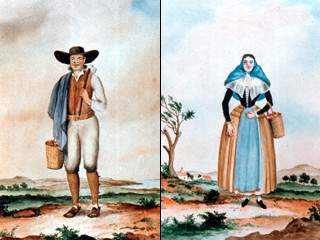 In 1777 some 600 people of Minorcan, Spanish, Greek, and Italian backgrounds (referred to collectively as “Minorcans”) arrived in St. Augustine, increasing the town’s population by more than 50 percent. They were refugees from a failed agricultural colony established by Alexander Turnbull at New Smyrna, in 1768. The Minorcans settled in the northern part of St. Augustine, and worked as fishermen, farmers , merchants and craftspeople. They spoke Catalan, and re-introduced Catholicism to St. Augustine. The descendants of these Minorcans form an important segment of St. Augustine’s population today, and Minorcan cuisine and customs are still much in evidence in 21st century St. Augustine. These 18th century paintings show the traditional dress of a man and a woman of Minorca. 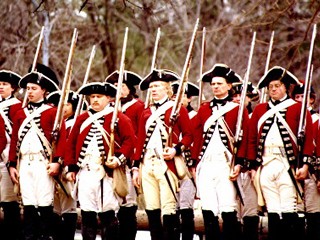 After 1763 British redcoat soldiers of the 9th and 60th Regiment of Foot occupied the Castillo, renamed “Fort St. Marks.” The soldiers themselves were quartered in what had been the Franciscan monastery in Spanish times, called the “St. Francis Barracks” after 1763. In addition to the regular forces, a large militia force known as the “East Florida Rangers” helped protect St. Augustine from (and retaliate against) rebel American threats along the frontier. 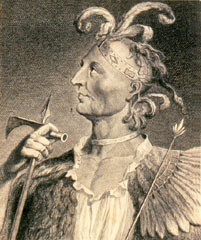 Lower Creek people from Georgia and Alabama had been gradually migrating to Florida since the destruction of the Franciscan Missions by James Moore in 1704. Such Spaniards as Elixio de la Puente and Diego de Pena worked to encourage repopulation of the Florida interior, and by mid century, the former cattle ranching areas were populated with Creeks who gradually, in their new setting, came to be known as Seminoles. They took advantage of the empty land, and especially of the herds of cattle that had thrived, grown and become feral once the ranches were abandoned. They were already an important economic and political force when the British assumed control of the colony.

Juan Triay was born in Ciudadela , Minorca in 1754. He arrived in Florida at the age of fourteen, as a member of Turnbull’s New Smyrna expedition. He was also one of the 600 people who made the trek to St. Augustine in 1777, where he lived on north St. George Street, and farmed land north of the city. Five years after coming to St. Augustine, he married another Minorcan refugee, Juana Ximénez, who was a widow with a five year old son. Their wedding may have occasioned a sansarasca (sherivaree in English), which consisted of two or three days of noise-making, buffoonery and tricks by the young men of the community when a widow or widower remarried. The couple had three more sons over the next four years, and acquired more farmland and one slave.

Thomas Browne was a plantation owner in Georgia when the Revolutionary War broke out. In the manner of Turnbull’s New Smyrna venture, Browne had enlisted a number of colonists from England to farm the plantation, and rumors abounded of his cruelty to the workers. As a staunch Loyalist, Browne suffered at the hands of the American rebels. The Sons of Liberty captured and pillaged his plantation, and Browne himself was tarred, feathered, tortured and scalped three times by them. He survived and reached St. Augustine where, craving retribution, he helped organize the East Florida Rangers militia, and was appointed a colonel. The rangers, dressed in buckskin uniforms, patrolled the frontier and raided farms and settlements, often scalping rebel sympathizers. As Revolutionary action reached the Georgia-Carolina backcountry, the Rangers were able to engage in skirmishes with rebel supporters, with what vengeance we can only imagine.

Benedita was born in 1772 in the New Smyrna colony. Her parents, Bartolomé and María Usina , were original members of Turnbull’s expedition, and joined the refugee group that fled to St. Augustine in 1777, when Benedita was just five. Her younger sister was born seven years later in 1784. The family occupied (as squatters) a Crown-owned lot on today’s Spanish Street and built a wood and thatch house there. Bartolomé farmed land to the north of St. Augustine, and by 1803 was able to buy the property legally. When Benedita was fourteen, although unmarried, she was listed as living with a neighboring family perhaps to help out in the house, or perhaps because of other family problems. She married Antonio Pons when she was fifteen, which was about a year older than the average age of marriage for Minorcan girls at that time. Pons had a farm in New Smyrna, and he took Benedita back to live with him there.

Back to Timeline Next → The End of Colonial Dominion

On the British period and the Minorcans

Fabel, Robin. 1996 British Rule in the Floridas In The new history of Florida. edited by M. Gannon. Gainesville: University Press of Florida. pp. 134-49.

Notes: An overview of British policy and practice in both East and West Florida.

Notes: The most up-to date and authoritative treatment of the Minorcan experience in both New Smyrna and in St. Augustine.

Notes: An accessible and popularly-written synthesis of life in British St. Augustine, by one of the leading scholars of this era.

Notes: A non-technical, treatment of St. Augustine’s British period history by a leading historian of the English in East Florida.

Notes: A popular account of the Minorcans in Florida.

On the black residents of St. Augustine after the first Spanish period

Notes: Provides an overview of the black experience in colonial Florida.

Notes: The most comprehensive and authoritative source on the black residents of St. Augustine throughout the colonial era.

On the origins of the Seminole People

Notes: A summary of research on the history and archaeology of the Florida Seminole People.

Weisman, Brent. 1989 Like beads on a string: a culture history of the Seminole Indians in north peninsular Florida. Tuscaloosa: University of Alabama Press.

Notes: A comprehensive archaeological and ethnohistorical study of the origins and history of the Seminole Indians.