From 1513 onward, Spanish and French explorers and would-be colonizers had attempted to establish a permanent European settlement in “the lovely, deadly land of Florida.”

It would take more than half a century, however, before this ambition would be realized by Pedro Menéndez de Aviles of Spain. Menéndez came to Florida in pursuit not only of wealth, but also of the French Lutherans under Rene de Laudonniere, who had built a settlement called Fort Caroline near what is today Mayport, Florida, in 1564.

After eliminating the French Protestant presence and taking over their fort in September of 1565, Admiral Menéndez and Chief Seloy of the Florida Timucua Indians met one another at what is today St. Augustine. Menéndez and his group of some 800 colonists (including 26 women and an unknown number of African slaves) made their first settlement at Seloy’s town, and used Seloy’s council house as the first Spanish fort. 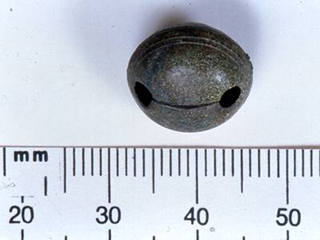 Beads and hawksbells were among the items brought by Menéndez as gifts for the Florida Indians. This was excavated at the Menéndez campsite of 1565-66. 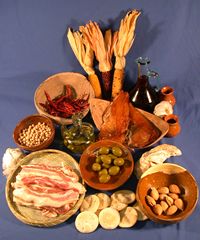 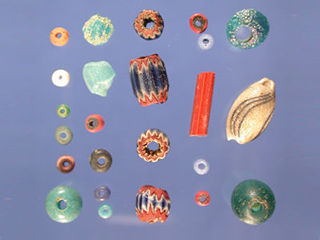 Beads and hawksbells were among the items brought by Menéndez as gifts for the Florida Indians. These were all excavated at the Menéndez camp and fort sites of 1565-66. 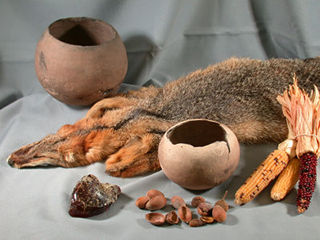 Pottery vessels, foodstuff, shell beads, amber and animal pelts were among the items used by the Indians as exchange and gifts for the Spaniards. 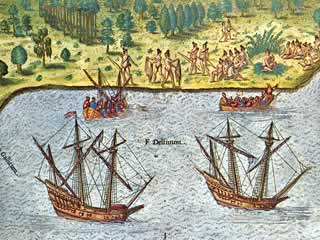 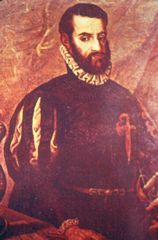 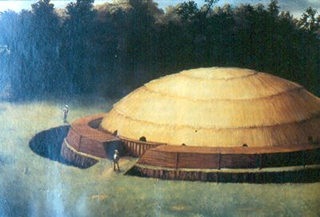 Timucua chiefs had very large council houses, where community events and rituals were held. They were usually circular, made of thatch and extremely large, capable of holding up to a thousand people. Seloy offered his to Menéndez to use as a fort. Discover magazine suggested what Seloy’s council house might have looked like, based on an original drawing by Albert Manucy.

“A warrior of Florida” Drawn by John White, ca. 1585. Tattoos were used by the Timucua nobility. 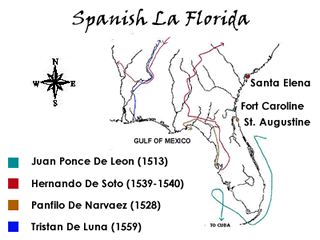 Back to Timeline Next → The Timucua in St. Augustine

Notes: An excellent overview of the Spanish explorers and colonizers in Florida, preceding the establishment of St. Augustine.

Lyon, Eugene. 1976 The enterprise of Florida. The University Press of Florida, Gainesville.

Notes: The classic and most comprehensive source on Pedro Menéndez and the establishment of Spanish Florida.

An accessible and entertainingly written- but thoroughly researched- biography of Pedro Menéndez, and account of the establishment of La Florida.

McGrath, John. 2000 The French in early Florida: in the eye of the hurricane. Gainesville: University Press of Florida.

Notes: A detailed recounting of the French expeditions to Florida in 1564, and the brief, but intense and decisive conflict with the Spanish at St. Augustine.