The Church and the Missions

Catholicism was a central and all-pervasive aspect of life in Spanish St. Augustine. Rules of social conduct for all Christians—European, American Indian or African—were largely set forth and enforced by the Church, and social activities were scheduled and organized by the annual round of religious feasts and observations.

Religious brotherhoods devoted to specific saints and rituals were active in St. Augustine from the earliest days of the colony onward. Although Jesuit missionaries began efforts to convert the Florida Indians to Catholicism shortly after the arrival of Menéndez, they were not successful, and they left the Florida mission field in 1571.

The first Franciscans arrived in St. Augustine in 1573, and by 1587 had established the Mission of Nombre de Dios at a Timucuan town on the outskirts of St. Augustine.

Their success was largely owing to Doña María Meléndez, the ruling chief of the town of Nombre de Dios. Other missions to the north, extending to what is today north Georgia, soon followed.

The Franciscans also built a monastery (convento) a short distance south of St. Augustine in 1588. The convento and its chapel were destroyed in the fire of 1599, and remained in ruins until 1603. 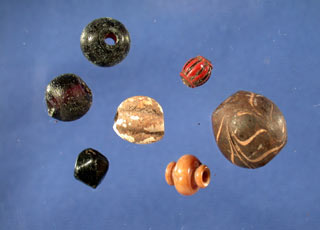 Rosaries were used universally by people in St. Augustine as a guide to Catholic prayer, and sometimes (particularly by women) as ornament. Jet and wood were the most common beads, although very ornate examples of gilded and inlaid glass, or of crystal were used by well-to do colonists. 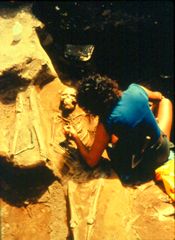 Excavation of a Catholic shroud burial 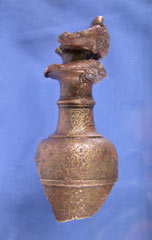 Handbells were important church items, used during the Mass and also to call the faithful to church. They were also used in the households of well-to-do colonists to summon servants. 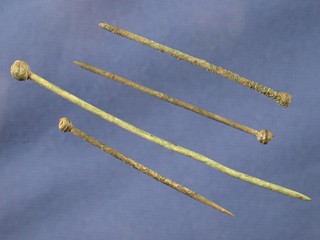 Burial rituals were among the most common functions of the clergy in St. Augustine. Sixteenth century corpses were wrapped in cloth shrouds and buried without coffins. These shroud pins came from the burial of a Spanish man in the cemetery of Los Remedios. 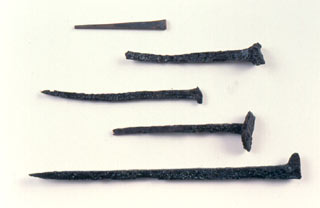 These spikes excavated at the Convento de San Francisco were used to construct the original Franciscan monastery. 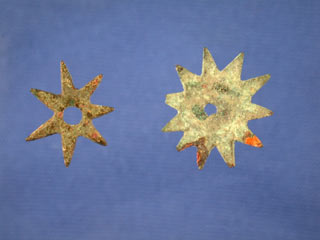 Religious confraternities devoted to penance through self-flagellation were common in Spain and in St. Augustine of the sixteenth and seventeenth centuries, particularly among the hidalgo classes. Whips with small metal tips like this were used by penitents to scourge themselves during “Processions of the Blood.” 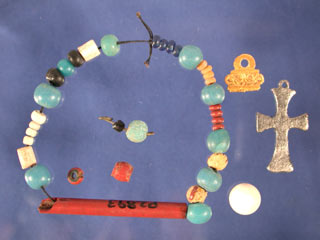 Beads and a gold clasp fragment recovered from the site of the Nombre de Dios mission many may have been used in rosaries by converts like Doña María Meléndez, or were perhaps gifts given to the leaders of the mission village. The silver crucifix and the blue and black beads were found at other Timucua mission sites, and may have been similar to examples used in the late sixteenth century St. Augustine missions. 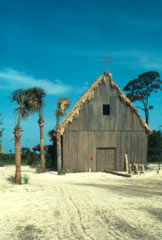 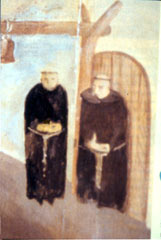 A Franciscan friar at the Mission of Nombre de Dios portrayed in a wall mural at the Fountain of Youth Park in St. Augustine. 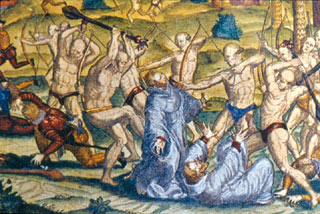 From 1566 to 1572 Jesuit friars tried to convert the Florida Indians. Their efforts failed, however, and several Jesuit priests were martyred in Florida. They were replaced by Franciscan missionaries in 1572. 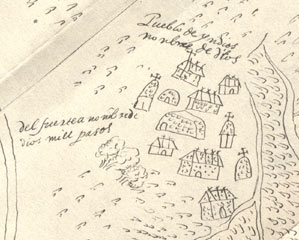 The mission village of Nombre de Dios, as shown in a ca. 1590 map. It was located approximately where the Shrine of Nuestra Señora de la Leche in St. Augustine is today. 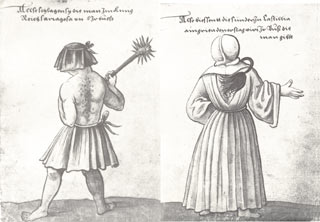 Doña María was the ruler of the town of Nombre de Dios during the 1580’s and 1590’s (the Timucua often had women rulers). She was a Christian, and her mother (who had been the ruling Chief before her) was one of the very early Timucua converts to Christianity.

Doña María married a Spanish soldier named Clemente de Vernal, and he lived with her at Nombre de Dios. Doña María saved the residents of St. Augustine from starvation in 1587 by supplying them with a large quantity of corn, when the town was flooded with hundreds of refugees—not only from the abandonment of Santa Elena, but also the survivors of five Spanish shipwrecks that occurred off Florida in that year.

Like all Timucua chiefs, she was part of a hereditary elite class respected by the Spaniards as nobles. Her son became the chief of another Timucua Indian mission town, San Juan del Puerto, in the 17th century.

Father Alonso de Escobedo sailed from Spain to Florida in 1586, but was captured by English pirates upon reaching Hispaniola. He and his companions were stripped of their goods and abandoned by the pirates. He finally made his way to Havana, where he joined with a contingent of several other Franciscan Friars and came to Florida. Fray Alonso was assigned to the mission village of Nombre de Dios, near St. Augustine where he is thought to have baptized more than a hundred Indians. During his time there he began (and possibly finished) a long epic poem called La Florida, describing his experiences in America. This was the first European poem written in North America. Despite the success of conversion efforts at Nombre de Dios, Fray Escobedo had left Florida by 1600, and returned to Spain, where his poem eventually came to reside in the Biblioteca Nacional.

Cristóbal de Coleantes was a soldier, and he served in both Santa Elena and St. Augustine. He formed a merchandising company with another soldier, Antón Martín, to wholesale and retail game, fish, lard and honey to taverns and households of St. Augustine. Coleantes was a member of the Brotherhood of the Holy Cross, a penitent order. He died in St. Augustine, and left in his will a robe and flagellant whip.

Back to Timeline Next → Life on the Remote Frontier

Gannon, Michael V. 1965 The Cross in the Sand: The Early Catholic Church in Florida, 1513-1870. University Press of Florida, Gainesville.

Notes: A classic study of the Catholic church and the mission system in Florida.

Hann, John. 1996 A history of the Timucua Indians and Missions. Gainesville: University Press of Florida

Notes: A very detailed account of the Timucua Indians under Christianity.