Life on the Remote Frontier

Although St. Augustine was small, remote and poor, life in the town was governed by traditional Spanish municipal organization, with a mayor and city officials in addition to the military and crown-appointed government officials.

The daily, weekly and monthly practices of the Catholic Church were also profoundly influential in shaping the routines of St. Augustine’s residents. And the constant quest for adequate food, clothing and shelter were concerns held in common by all of the town’s citizens.

But despite these shared community elements, the daily lives and experiences of individual people in St. Augustine varied dramatically. Within the town’s small resident population, sharp social distinctions were recognized and maintained. These distinctions took into account place of birth, race, occupation and income.

Spaniards with some connection (however remote) to nobility were at the top of the social hierarchy, and were able to use this to advance themselves both socially and economically.

Most of the residents were Spaniards of humble background, connected to the garrison. Many of these soldiers were able to improve their economic circumstances by practicing other trades and professions in addition to their military duties.

By the end of the sixteenth century a significant portion of St. Augustine’s inhabitants were criollos (people of Spanish descent who were born in America), Indians, Africans or of multiracial parentage. A peninsular (a Spaniard born in Spain) was generally held to be more socially prestigious than a criollo, and people of color were generally relegated to the lower social ranks.

A great many Spanish soldiers married Indian women, which, by 1565, was already a long-established practice throughout the earlier Spanish colonies in Mexico and the Caribbean. 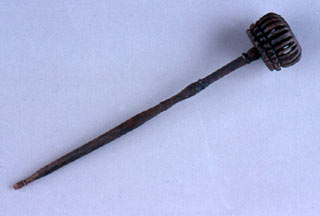 Chocolate (cacao) was another New World product that was eagerly adopted by the Spaniards, who mixed it with sugar to make a sweet drink. They also adopted the Mexican chocolatero, which was used to whisk and froth the chocolate. This example was found in a well in St. Augustine. 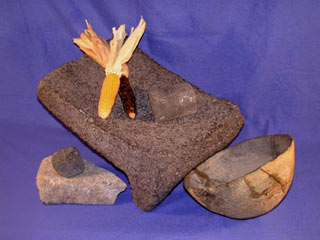 By the end of the sixteenth century, most of the cooking in St. Augustine kitchens was done in Indian pots, using corn ground on a metate (grinding stone) with a mano (hand grinder). Manos and metates were traditional Mexican Indian implements, and were imported to St. Augustine from Mexico. The most common pottery vessels were made of the Timucuan St. Johns ceramic ware, acquired locally. The forms remained traditional, with few alterations to suit Spanish tastes, probably because most of the cooks were Indians or mestizas (women of mixed Spanish-Indian ancestry). 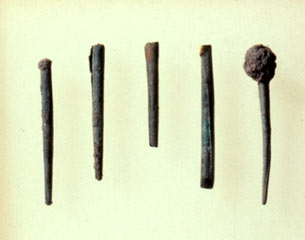 During the sixteenth and seventeenth centuries, buttons were normally used only by military men and wealthy colonists. Everybody else fastened their simple clothing with laces tipped by metal ends known as “aglets.” Although in other parts of the Spanish world aglets were sometimes richly embellished as ornaments, those from St. Augustine are simple, copper tubes. 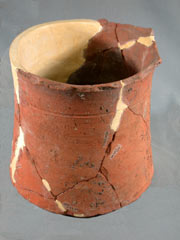 The Spaniards in St. Augustine did not dig latrines or privies or outhouses, but instead met their sanitary needs with chamber pots, or bacines. This redware example shows the typical shape of a sixteenth century Spanish bacín. 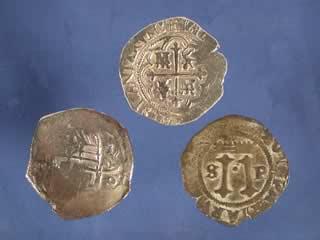 Money was scarce in St. Augustine and rarely lost. There were more coins in the town during the sixteenth century, however, than there would be later, as the Spanish crown found it increasingly difficult to support the St. Augustine garrison after 1600. These silver 2-reales were minted in Mexico City between 1566 and 1598, during the reign of Phillip II of Spain. The copper four-maravedí piece was minted in Santo Domingo between 1542 and 1587, and was the small change of the sixteenth century, worth a few cents today. These are among the earliest coins excavated in St. Augustine. 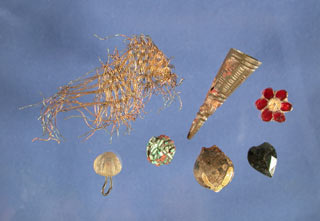 Well-to do residents of St. Augustine flaunted their station by wearing clothing of expensive fabric, often embellished with metallic lace, buttons, beads and ornamental mounts like these.

This unglazed, redware lion’s head, inlaid with chips of feldspar, came from an elaborately-molded pot. An identical vessel (shown at bottom) was found in Mexico City, and such luxury elements did make their way to St. Augustine, perhaps with officials such as Juan de Cevadilla, the collector of the situado in Mexico. 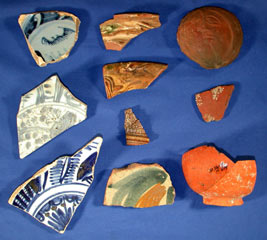 Although St. Augustine was on the periphery of the Spanish empire, some of its Spanish residents still managed to acquire a sample of the international array of goods that circulated through the Spanish-American economy of the late sixteenth century. Items from Spain, Mexico, China, Italy and Germany have all been found in well-to do St. Augustine sites of the period. 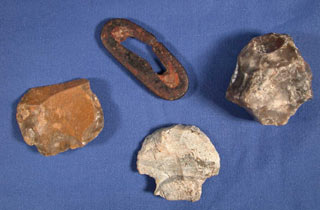 In the absence of matches (and the presence of perpetual dampness) colonists struck flint against metal to produce sparks for household fires. At least one enterprising settler re-used an ancient Archaic stemmed projectile point as her strike-o-lite. 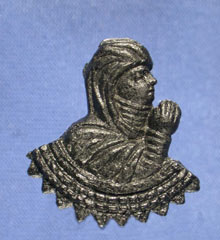 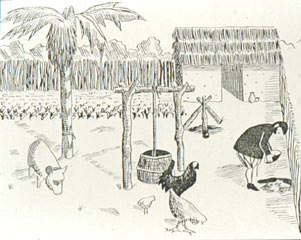 A typical settler’s house and lot of the late sixteenth century in St. Augustine, showing domestic activities and organization revealed through excavation.

Grinding corn was one of the most tedious daily tasks of the St. Augustine colonists in the sixteenth century, since there was no grist mill in the town. Corn was prepared in the Mexican Indian manner, by grinding on a basalt metate (grindstone) with a stone mano (pestle), imported from Mexico. In this image the mano and metate are used to grind chocolate, a luxury item in St. Augustine. 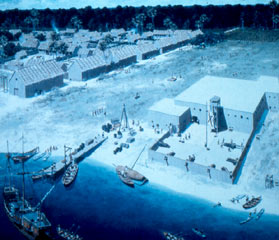 Painting by Noel Sickles depicting St. Augustine as it may have looked in 1580. 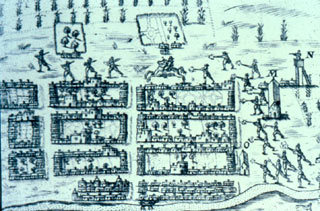 Detail of the map drawn of St. Augustine in 1586 by Baptiste Boazio, showing the regularity of street and lot layout in the town.

Francisco Camacho came to Florida in the 1560’s from San Lucar de Barrameda, near Cadiz. He was a soldier in the regiment, and also a fisherman. He married an Indian woman named Teresa, and in 1580 the couple’s household in St. Augustine included Francisco, Teresa, Teresa‘s sister Catalina, and Catalina’s son, Juan. Fewer than half of the Spanish men in St. Augustine were married, and fewer than half of those had a Spanish wife.

Juan Cevadilla married into one the elite governing Spanish families of St. Augustine, and was given the lucrative post of situador. The situador was responsible for going to Mexico City each year, collecting the money of the crown subsidy for St. Augustine, and buying goods from the money for shipment to St. Augustine, There were clearly many opportunities for personal gain in this process, and Cevadilla’s will reflects this. He died suddenly in Veracruz in 1590 while collecting the subsidy, leaving to his widow, Doña Petronilla, such elaborate household furnishings as a carved and gilded canopy bed of embroidered Chinese taffeta, great quantities of luxury cloth and clothing, several African slaves, horses and other livestock, several sets of glazed earthenware and Chinese porcelain, silverware, perfume and books.

Señora de Vera’s soldier husband died in St. Augustine sometime before 1580. She supported herself by opening her home as a boardinghouse, renting space to five soldiers. Three of the soldiers also worked on the side as carpenters, and one worked as a barber. Men vastly out-numbered women and they generally continued to live in the comrade groups mandated by Pedro Menéndez at the first settlement, in order to pool rations and share household needs. Most soldiers also practiced trades or crafts on the side to supplement their meager salaries, usually through barter.

Back to Timeline Next → Part III: Criollo Consolidation

Notes:A collection of articles summarizing the results of archaeology in sixteenth century St. Augustine sites up to 1985.

Notes: Lists of personal goods compiled from wills as well as from shipping records are presented and discussed.

Notes: A charmingly illustrated and written book about St. Augustine, its people and its architecture at ca. 1580.

Notes: An archeological reconstruction of the diet, foodways and environmental resources of the sixteenth century colonists of St. Augustine.