At the middle of the seventeenth century, St. Augustine’s population was only between about 500 and 600 people. By the end of that century, it had risen to more than 1,400, and by the time the Spaniards evacuated St. Augustine in 1763 there were more than 3,000 residents.

This steady growth came about through major increases in the number of soldiers in the garrison, the arrival of groups of convicts and laborers sent to St. Augustine to work on the fortifications, and to large refugee populations of Indians and Africans who began to enter the town after 1680.

The Indian population of the St. Augustine presidio was counted at 90 in 1675. Fifteen years later it had risen to 225, and grew steadily until 1728 when a census recorded 1,350 Indians in refugee villages around the town. These included Timucua, Guale, Yamassee, Apalache, Jororo and other groups seeking refuge from English slave raids. Not all were Christians, but their presence in the settlement (like that of the Africans) contributed to the diversity and exchange of cultural elements that was a hallmark of eighteenth century St. Augustine.

The diversity of St. Augustine’s population became even more pronounced between 1757 and 1760, when 97 families of farmers from the Canary Islands immigrated to Florida, where they established farms and small enclaves north of the town. Although soldiers from the Canary Islands had been stationed in St. Augustine throughout the century and were considered peninsulares, the newcomers were relegated to peón status and remained outside of St. Augustine, much to their peril from English and Indian raids. 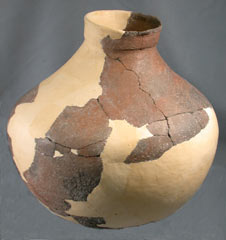 This large, hand-made jar was found at the homesite of Gerónimo de Hita y Salazar (Cavalry soldier and commandant at Ft. Mose). It is very similar to West African pots in its form and finish, and may represent an example of an Afro-colono pot in St. Augustine 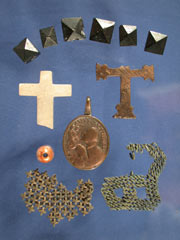 The common denominator of all the new arrivals to and older residents of St. Augustine—Black, Indian, or European—was Catholicism, and all used the same symbols of devotion. Devotional items included crosses, medallions and, of course, rosaries. These small, cubic jet beads were common rosary beads during the early to middle eighteenth century. 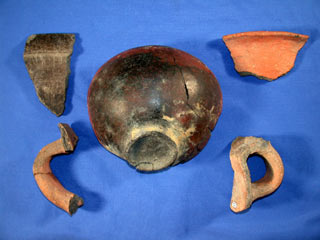 “Colono-ware” is used by archaeologists to refer to pottery that is made using non-European manufacturing techniques and materials (hand-building and low-fired, local clays), but produced in European forms. Colono-ware pottery is occasionally found in St. Augustine, possibly made by Indian or African potters for sale in the market. The cooks of St. Augustine, however, seemed to prefer traditional, unmodified Indian pots for kitchen use, probably because they were accustomed to Indian traditions of food preparation. 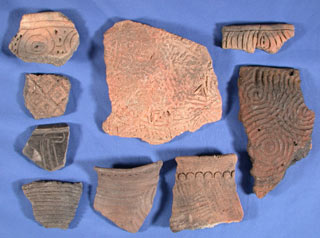 As refugee Indian groups arrived in increasing numbers at St. Augustine, several different tribal groups often found themselves living together in the same towns. This mix of pottery types from the village sites as well as from the households of St. Augustine reflects the diversity – and upheaval – of Native American society in eighteenth century St. Augustine.

People of mixed Spanish, Indian and African ancestry were known as “castas” in Spanish colonial society. The Spaniards developed a highly organized and detailed system for identifying the precise racial heritage of an individual, as shown in this eighteenth century painting from Mexico. In reality however, the categories were fluid, and often changed with personal circumstances. 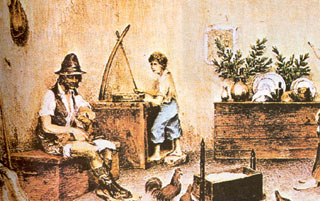 Several hundred people—mostly farmers and their families—were brought to St. Augustine from the Canary Islands in 1757. The original plan called for the farmers to settle in the Florida interior, where they could help control the hinterlands around St. Augustine, and provide a stable food source. Most of them, however, remained in the vicinity of St. Augustine.

María Magdalena’s mother, María Luisa Balthazar, was a Mocama Timucua Indian from the village of Palica, and her father, Juan Chrisístomo, was a Caribali African slave living in St. Augustine. María Magdalena and her sister Josepha Candelaria were born in their mother’s village, and were free. María Magdalena was married three times, first to Juan Margarita, who was thought to have been an Indian. In 1743 she married Pablo Prezilla, a free mulatto from Venezuela, and in 1745 she wed her third husband, Phelipe Gutiéres, a white criollo. María’s sister Josepha married in 1747 to an Indian of La Punta, Juan Manuel Manressa, and went to live with him there at the south end of the Spanish town. After María Magdalena’s and Josepha’s mother died in 1744, their widowed father Juan married Antonia, an African woman who was, like himself, a Carabali and a slave. They were married in January of 1744, the same month in which their first child was born. They subsequently had several other children. By 1750 Juan had gained his freedom and was a member of the Mose regiment, but Antonia and the children remained enslaved, living in St. Augustine. (Landers 99:58).

Pedro Ribera and María de la Cruz were Guale Indians, and Pedro, at least, had been born in the village of Tolomato. They lived in St. Augustine, where Pedro was a member of the cavalry company, and María may have been a midwife. The marriages of their four children illustrate the changing social conditions and increasing social diversity and fluidity in St. Augustine of the mi-eighteenth century. Their daughter, Ana Lucía, married a peninsulare soldier from southern Spain. One of their sons, Juan, married a woman from the Canary Islands, recently arrived as part of that immigrant group. Two other sons married white criolla women: Francisco Xávier to a first generation criolla, and Antonio to a well-placed criolla. She was, in fact, a first cousin to the Governor’s wife.

Back to Timeline Next → Criollas & Soldiers