From September of 1565 to May of 1566 the Spanish colonists under Pedro Menéndez made their settlement at Seloy’s town. During that time they fought and expelled the French settlers at Fort Caroline, converted Seloy’s council house into a fort, and used St. Augustine as a base for exploration of other parts of Florida.

The colonists—most of whom were men—came equipped to establish a Spanish way of life, but quickly turned to their Timucua hosts for food, cooking pottery and wives. Relations between the Spaniards and the Timucua deteriorated quickly, and the Timucua began to make repeated attacks on the Spaniards to drive them away.

Just nine months after their arrival, the Spaniards decided to move their town across St. Augustine bay to Anastasia Island, where they felt safer from Indian attack. Although occupied for six years, no trace of that town site has yet been found.

Menéndez established another town in 1566, that of Santa Elena, located on what is now Parris Island, South Carolina. This was the new capital of La Florida until 1577, and St. Augustine was a small military garrison. 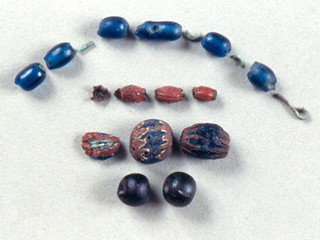 Beads found in a Spanish trash pit may have been used as ornaments or jewelry or in rosaries by the few women present in the settlement. They might also have been intended for trade with the Timucua. 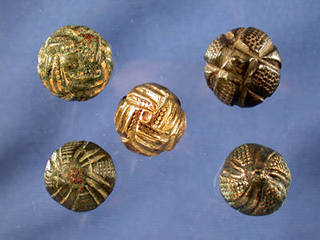 These brass buttons, cast in one piece with a drilled shank, were worn on the doublets of Menéndez’ soldiers. 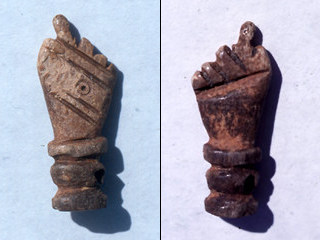 Small clenched fist amulets called higas (or figas) have been used in Spain and the Mediterranean region from Roman times to the present day to protect people form a variety of evils. They are thought to be especially powerful in warding off the evil eye for babies, who are naturally weak. This higa, from the Menendez campsite, was carved of bone and painted black to look like jet (also thought to have magical properties). It might even have belonged to Martinico, Martín and Leonor de Argüelles son born in the first settlement. 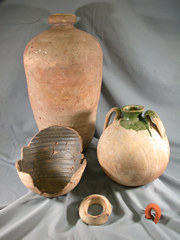 Wine and olive oil were perhaps even more important to the Spaniards than wheat and beef. Quantities of both were shipped to St. Augustine in these vessels known as “Spanish Olive Jars”, which were the primary shipping containers throughout the Spanish Americas. The earliest ones were round with handles, and after about 1580 they became elongated, with ring-shaped rims. 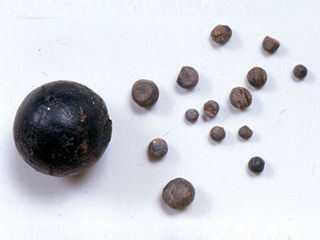 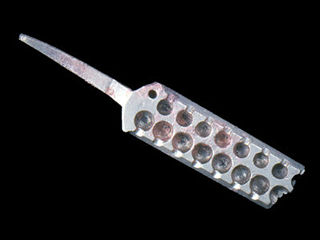 Most Spanish soldiers made their own lead ammunition. This sixteenth century brass shot mold produced multiple ball shot of 6mm. and 8 mm. 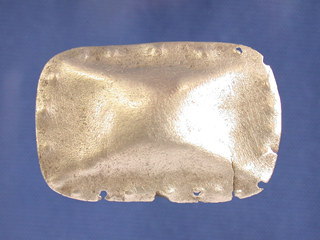 This silver plaquette was hammered and embossed by the Florida Indians of the sixteenth century, probably from silver salvaged from Spanish shipwrecks. It was found in a Spanish trash pit at the Menéndez campsite, and was probably a gift or trade item received—and tragically, lost—by a Spaniard. 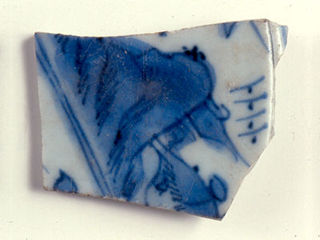 A few fragments of Ming porcelain, still very rare in the Americas of 1565, attest to the status of some of the hidalgos (high-status gentlemen) on the expedition. 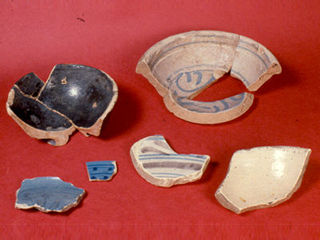 The members of the 1565 expedition came equipped with Spanish pottery for the table, but soon turned to Indian pottery for cooking. 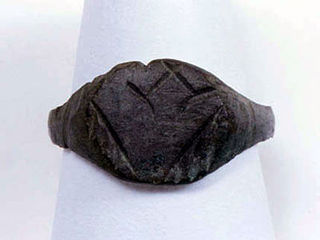 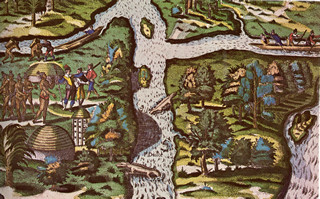 The Spaniards lived in an uneasy co-existence with the people of Seloy. Although this is an engraving of the French near Ft. Caroline, it depicts a scene similar to that which may have been witnessed at St. Augustine in 1565.

A Spanish soldier of the sixteenth century. 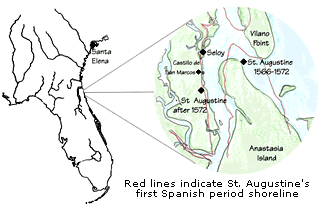 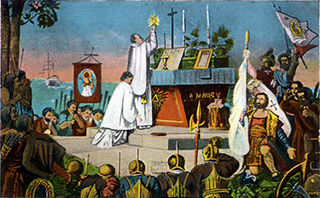 St. Augustine was officially established with the Mass celebrated on September 8. This postcard from the 1950s interprets that event.

“A Woman of Florida” drawn by John White, ca. 1585. Timucua women provided corn, pottery and partners for the men of the new colony. 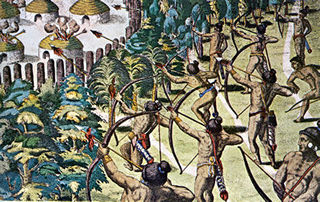 The Timucua, tired of the Spaniards in their community, fired flaming arrows at the fort in 1566. The fact that the fort was originally an Indian structure made this attack especially successful. 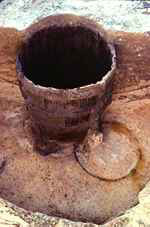 Spanish well at the Menéndez campsite. It was constructed of Spanish oak barrels, probably in 1565.

The man known as “Juanillo” was a black sailor and victim of a shipwreck sometime before 1562. He survived the wreck, but was taken captive by the Timucuan Chief Saturiwa, whose seat of power was near present day Jacksonville. Juanillo learned the Timucuan language during his time with Saturiwa, and was rescued in 1565 by Pedro Menéndez. He was put on the military roster at St. Augustine and served as an interpreter until 1567, when he left Florida for Puerto Plata in Hispaniola.

Father López came to Florida in 1565 as the chaplain of Pedro Menéndez, and became the first pastor of St. Augustine. On September 8 of 1565, he celebrated the first Mass in the colony, an event that marked the formal establishment of the town. López was accompanied by three other secular priests, including Rodrigo García Trujillo and Pedro de Rueda. The role of the secular priests was to minister to the spiritual needs and well being of the Spanish colonists, while conversion and missionization of the Indians were undertaken by members of the regular orders (in the case of Florida, Jesuits and Franciscans).

Martín de Arguelles was a soldier and a loyal associate of Pedro Menéndez and, like Menéndez, he came from the Asturias region of northwestern Spain. Martín, his wife Leonor de Morales and their children Sancho and Gerónima were among the original members of the 1565 expedition. The following year, Leonor gave birth to their son Martinico, who was the first Spanish child born in Florida, possibly at the Seloy village site. By 1567, Martín de Arguelles was the mayor (alcalde) of the relocated St. Augustine, and also owned a tavern.

Back to Timeline Next → Part II: Florida on Trial

Notes: A detailed presentation of information from newly-discovered documents that clarified the sequence and nature of St. Augustine’s earliest forts. Published by the St. Augustine Historical Society.

Notes: A summary of historical information about the founding of St. Augustine under Menéndez and the ensuing settlement of the sixteenth century