The reduced level of external crown support, and the increasing diversion of resources and activity to the hinterland farms and missions had a negative economic impact on the residents of seventeenth century St. Augustine.

Food, clothing and Spanish material goods were increasingly scarce, and residents of the town’s households had to be creative both in the ways they made ends meet, and in they ways they maintained their status as Spaniards.

For those of elite background, the outward maintenance of “Spanishness” was of paramount importance. Others, less privileged by birth, were able to more freely combine Spanish, American Indian, African and newly-generated criollo traditions into a lifestyle that eased survival in this difficult place.

The Purchasing Power of a Spanish Real

These are the worldly goods inventoried as part of Captain de la Rua’s will in 1659. After settling some debts, the estate went to his wife. Translated by John Hann and reprinted in America’s Ancient City: Spanish St. Augustine 1565-1763, Edited by Kathleen Deagan. New York: Garland Press. pp. 492-543. Original document is in Archivo General de Indias, Escribanía de Cámara 155B. A microfilm copy is in the P.K. Yonge Library of Florida History, University of Florida.

The dowry brought by his wife, Doña Catalina Costilla y Orellana, was returned to her. It included:

Inventory made of household goods after Don Francisco’s death. 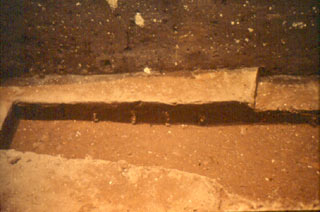 By the mid-seventeenth century, many people who died in St. Augustine were buried in wooden coffins, made in the shape of a simple tapered rectangle. This is an excavated coffin at the Nuestra Señora de la Soledad cemetery, showing the shape of the wood coffin (which had log since decomposed, leaving only a stain ) and the coffin nails still in situ. 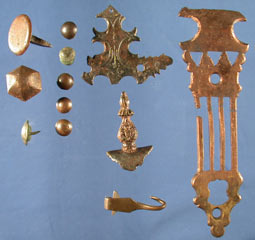 The Spanish houses of St. Augustine – during all centuries- were very sparsely furnished. This was typical of most homes of the period in Spain as well. Chests for storing valuables, a few chairs, a table and bed would have comprised most households furnishing. Archaeological remnants of these are few, consisting of copper or brass tacks, decorative inlay, clasps and other hardware. 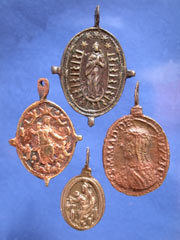 Religious medallions, blessed by a priest, were used on rosaries and on necklaces. Those from St. Augustine are brass or copper alloy. During the seventeenth century the Virgin Mary and the Immaculate Concepcion were the most prominent themes of the medals, from St. Augustine, but other examples depict St. Anthony of Padua, The Holy Sacrament, “IHS”and St. Francis of Assisi. 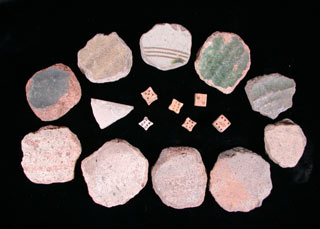 Spaniards were passionate about gambling, and men, women and children of all classes and ages played both dice games and board games. In the absence of official game pieces or markers, the residents of St. Augustine made their own out of ceramic fragments. Seen here are a set excavated from a single well in St. Augustine – half of them made from plain, unglazed olive jar sherds, and the other half from green-glazed and decorated pieces. 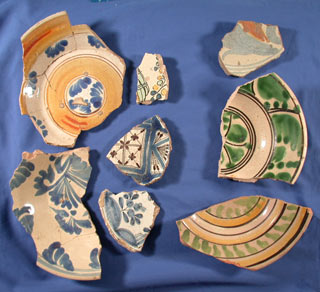 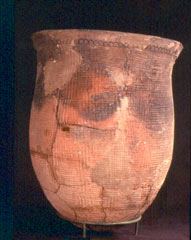 As Captain de la Rua’s will suggested, Guale pottery – including Altamaha ware and San Marcos Stamped pottery- had largely replaced the Timucua St. Johns cooking pottery in St. Augustine’s households by mid-seventeenth century. The Guale missions of the Georgia coast were gradually relocated closer to St. Augustine through the century, as hostile, anti-Spanish Yamassee Indians attacked and raided them. Many Guale came to St. Augustine, and continued making, selling and using their pottery in the town. This example of an Altamaha pot comes from the mission site of San Juan del Puerto near Jacksonville, one of the closest missions to St. Augustine. 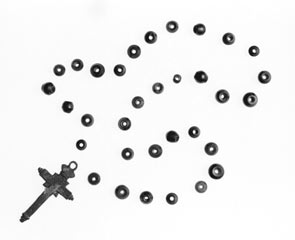 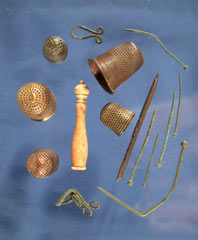 Needlework was not only a pastime for Spanish women, but a necessity in a place where cloth was scarce and repairs constant. Girls were trained to sew from an early age, and some of the thimbles found at St. Augustine sites were child-sized. Lace making was also a prized accomplishment among Spanish women, and fragments of lace bobbins have come from several sites. 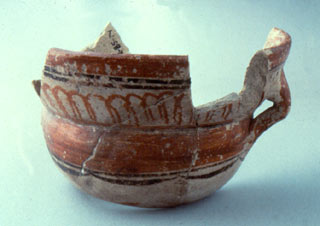 Not all of the pottery imported from Mexico in the seventeenth century was glazed. This small pot, for example, is a type known as Guadalajara polychrome (or Tonolá ware), and it combines European forms with Aztec manufacturing and decorative traits. Spanish women believed that water kept in these vessels was good for the complexion, and small pots were exported from Mexico by the thousands- not only to Spain, but to St. Augustine as well. 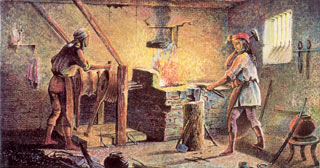 St. Augustine had three blacksmith forges during the seventeenth century. This image of a Spanish colonial smithy in the Southwest shows a scene that was also typical of St. Augustine’s blacksmiths, except that the Indian worker was more likely to have been an African in Spanish Florida. 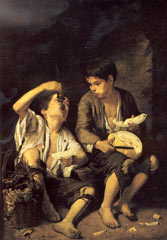 By all accounts the two Spanish boys in this seventeenth century painting are probably similar to the average young resident of St. Augustine. Clothing and shoes were scarce, and locally grown fruits were among the only treats they might expect to find. There was no school for children, causing a later priest to later complain that they “apply themselves to idleness, which causes various habits, this being the reason for much ignorance that is suffered”. 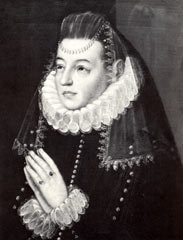 This portrait of a well-to do lady in seventeenth century Mexico shows the manner of dress, ornamentation and piety to which upper class Spaniards aspired. 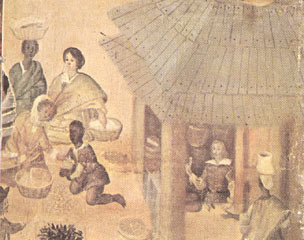 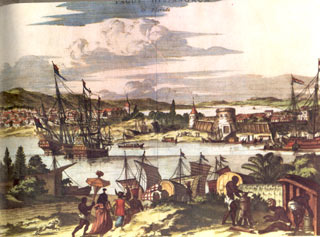 This highly imaginative engraving of St. Augustine was made in 1671, apparently by an artist who had not visited St. Augustine, and did not realize that Florida has no mountains.

Francisco de la Rua, a peninsulare, was a Captain in St. Augustine’s infantry. He married Catalina de Orellana, a wealthy criolla from Havana, however, she refused to live in St. Augustine with him. On his deathbed in 1659, he wrote that “against my wishes she remains in the city of Havana and despite the many entreaties I have made to her, she has not wished to come to this presidio to live a married life” (Hann garland:498). Captain La Rua left a board house and two black slaves named Juan Gutiérrez Criollo and Mateo Angola. His will listed a wide range of luxury and personal items, including thirteen Guale pots.

Blacksmiths were vital to frontier society, producing the hardware and tools needed for house and building and ship repair, as well as repairing weapons and making horseshoes. Juan Merino was a free black citizen of Havana, Cuba, and a blacksmith by trade. In 1675 he committed an unspecified crime in Havana, and was sentenced to four years labor as a blacksmith in St. Augustine. He worked at the forge of Manuel Roldín, a Master Blacksmith, Armorer and Charcoal burner. Roldín was only 28 years old, and literate, but earned the dislike of Governor Pablo de Hita Salazar, who called him “a clerkish type, young and lazy.” (Bushnell 1981, Blacksmith documents from Connor collection- HASPB).

Francisco was 12 years old in 1676, when his father, the native-born Sergeant Major of St. Augustine (and recent interim Governor) died. Eight years earlier Francisco’s small sister had been killed during a pirate attack on St. Augustine. As was the custom (as a humane welfare policy), the position and pay of the father was passed to his orphaned son, who would soon be old enough to serve as a soldier. The incident sparked confrontations with crown authorities in Spain, who strictly prohibited native-born criollos from holding positions in the government or in the military. Such prohibitions were ignored in St. Augustine, however, where it was almost impossible to attract sufficient Spanish manpower to meet regimental needs. This became increasingly clear, and by the time Francisco took on his fathers “dead pay”, the attitude toward criollos was much relaxed, and nearly half the garrison was made up of criollos (Arana garland:431). Young Francisco went on to serve a career in the military, as did his son and grandsons, one of whom became the colony’s sergeant major in the eighteenth century.

Isavel was a free mulatta who baked rosquetes, spiral-shaped cakes. She sold these cakes, as well as honey, door to door throughout the town, and from her home. She was an independent entrepreuer in an age when such a status was difficult for any woman, let alone a black woman.

Juana was an Indian woman married to a Spanish soldier named Toma Hernando, and they had a house in St. Augustine. Juana died in 1689, and her death sparked a controversy between St. Augustine’s Franciscan (regular) clergy and their rivals, the secular clergy. The Franciscans claimed that they should see to her burial because she was an Indian, while the Parish priest asserted jurisdiction because she was a resident of the town and his parish, and “lived the way a Spaniard lives”. The case was appealed to the Bishop of Cuba, Diego de Compostela, who decreed in favor of the Parish priests, but not before the Franciscans secretly removed Juana’s body to the Convento de San Francisco for burial. (Kapitske 2001:134).

Back to Timeline Next → Disease & Disaster

Notes: The most comprehensive historical study to date of life in seventeenth century St. Augustine.

Notes: A lively and non-technical, but scholarly treatment of this crucial period in St. Augustine’s history.

Notes: A fascinating study of a court case addressing charges of counterfeiting and other crimes against two Apalachee Indians in St. Augustine.

Notes: This is the most comprehensive treatment of life in seventeenth century St. Augustine from an archaeological perspective. Although unpublished, it can be obtained through interlibrary loan from the University of Florida Library.