The destruction of the cattle ranches and interior missions by James Moore, and the continuing English raids that made farming impossible cut St. Augustine off from what had once been an important source of food. At the same time, Spain’s involvement in European wars during the early eighteenth century reduced it’s support of the more peripheral American colonies.

The situado supplies of goods and money for Florida—provided out of revenues from Mexico—became extremely erratic, sometimes not arriving for years at a time. Even when the situado was sent, it didn’t always arrive in St. Augustine—more than once the supplies were sunk by hurricanes or captured by privateers.

The first decades of the eighteenth century were, indeed, a starving time, and gradually St. Augustine’s residents began to take matters into their own hands. Entrepreneurial individuals set up their own shops selling whatever goods they could acquire, whether legal or illegal. Trade with the English—illegal until after 1740—flourished, and several shops operated by English merchants were thriving in the town.

One observer in 1736 claimed that he saw six English merchant vessels moored at the same time in the St. Augustine harbor. Some Spaniards also turned to privateering—seizing English, French and Dutch vessels when they could, and selling the goods in St. Augustine. Others initiated trade with the Lower Creek Indians

As a result of these activities, some individuals became quite wealthy through trade and price scalping, but the majority of St. Augustine’s residents struggled with food shortages and high prices. For everyone, however, there was a dramatic increase in the range of material goods available if one could afford them. 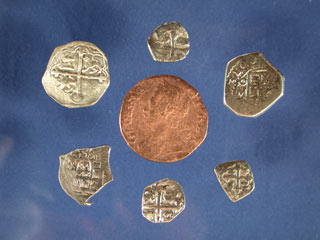 The influx of soldiers from Spain and New Spain, and the beginning of entrepreneurial trade increased the supply of money in eighteenth century St. Augustine. Although coins are found archaeologically only rarely, they are much more common than in sites of the previous centuries. Although Spanish coins are by far the most common, English coins have also been found. 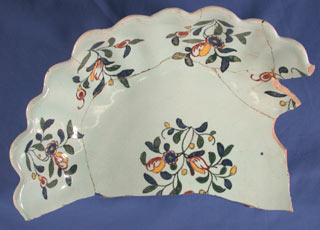 French goods—most notably French faience pottery and ornamental items—also became much more common in St. Augustine after the ascension of Philip V, the first Bourbon King of Spain, in 1702. French goods entered the colony (both legally and illegally) throughout the first half of the century. This faience bowl is an example of the ornamental French ceramics found in the town. 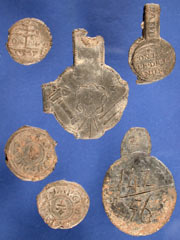 Goods imported from England, France, Spain or other countries by St. Augustine’s merchants often arrived in bales sealed with the shipper’s company mark, or the tax collectors stamp. Most of those found in St. Augustine are French.

A number of merchants grew wealthy from their trade ventures in St. Augustine, and were able to acquire luxury goods. This enameled perfume bottle excavated at merchant Cristobal de Contreras’ home may have belonged to his criolla wife. 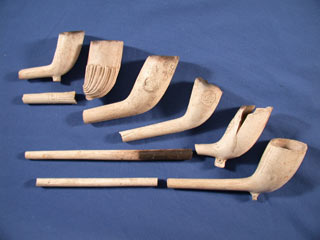 Smoking tobacco in pipes became popular in St. Augustine for the first time during the eighteenth century. Before then, most Spaniards smoked cigars or used snuff. Although they continued these smoking traditions, they also adopted the pipe smoking introduced by the English. English, French and Dutch pipes have all been found in eighteenth century St. Augustine sites. 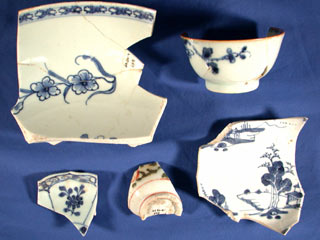 Asian porcelain was one of the few categories of goods that was not supplied to St. Augustine by English merchants in the eighteenth century. Although Chinese porcelain is not abundant in St. Augustine, it is found consistently in small amounts at nearly all Spanish sites. Most of the porcelain in St. Augustine arrived from Mexico, where the Spanish Manila Galleon trade (established in 1577) offloaded Asian products in Acapulco before transporting them overland to Veracruz for transshipment to Spain. Porcelain was especially abundant in St. Augustine in 1712. In that year the Mexican officials paid the St. Augustine subsidy to the situado collector Joseph Horruitiner, in Asian dishes and cloth, on the supposition that he could sell it for high prices in Veracruz. Horruitiner was unable to find any buyers, however, and was forced to sail unhappily back to St. Augustine with his supply ship full not of provisions and money but of porcelain and silk. The outraged governor promptly threw him in jail. 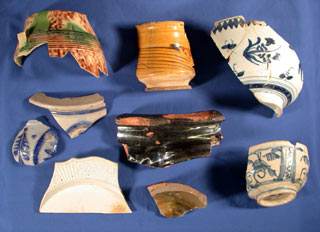 English merchants from Charleston and New York flooded St. Augustine with manufactured good of English origin, and ceramics are the category of these most commonly found in excavations. This shows a typical range of English pottery from Spanish St. Augustine sites of the mid-eighteenth century. 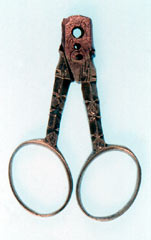 Scissors with brass handles and iron blades (missing in this example) were imported to the Spanish colonies in large numbers during the eighteenth century. They were used by women for needlework, and were very popular items trade among Native Americans. 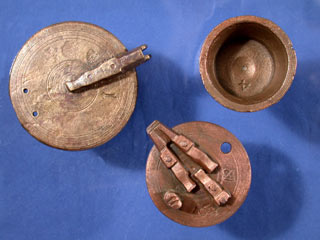 These cup weight elements from St. Augustine sites were parts of nested sets of cup weights used by merchants. 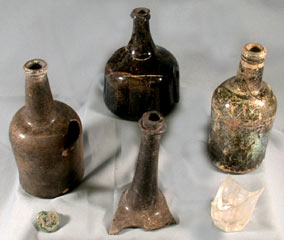 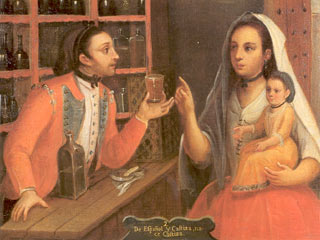 Many shopkeepers and merchants in St. Augustine also operated taverns selling wine and spirits. This image shows such a tavern in eighteenth century Mexico. 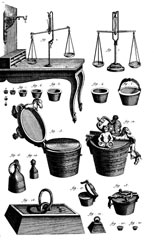 From the sixteenth century to the present day, brass nested weights (also known as cup weights) were used widely in the Spanish colonies and throughout Europe for a variety of other weighing tasks. Nested weight sets were made up by a series of graduated, cup-shaped weights that fit into one another, and the largest (outer) cup usually had a hinged lid that enclosed the nested set into a compact unit. The weight of the outer lidded cup was equal to the sum of the weights of all the smaller cups.

Cristobal Contreras was from Tenerife in the Canary Islands. He came to St. Augustine at some time before 1758, when he married Dorotea de Anaya, a criolla whose family lived just south of the town plaza. They had four children and owned two African slaves when they evacuated to Cuba in 1763. Cristobal was a merchant of considerable wealth, and had a shop, possibly in one of the three stone buildings on the lot where he and his family lived, which is today the Ximenez-Fatio House. He may also have had a tavern in his shop, judging from the large numbers of English wine bottles excavated at his homesite.

Juan de Ayala y Escobar came to St. Augustine in the mid-seventeenth century as an foot soldier, and by 1703 had worked his way up to Captain and Sergeant Major of the colony. He represented St. Augustine on several trips to Spain and Mexico to ask for aid, and he was one of many well-placed government officials who took advantage of their position to make a profit. in 1712, during the worst period of food shortage, Juan de Ayala illegally procured several boatloads of English food, and sold them at an exceedingly high price to the eager residents of St. Augustine, who would otherwise have gone without. When Governor Córcoles y Martinez tried to arrest his second in command, nearly the entire populace of st. Augustine turned out in the town plaza to protest and to support Ayala. The governor backed down, and the citizens cheered loudly.

Elixio de la Puente, sometimes referred to as the most prominent Floridian of the eighteenth century, was born into a St. Augustine criollo family in 1724. He entered the service of the crown in 1729 as an infantry cadet. By 1739, he had risen to be Chief Clerk of the Royal Accountant, an important Treasury position. Elixio de la Puente also maintained strong ties of friendship and trade with the Lower Creek Indians, and he is said to have had an Indian name. It was probably through this trade, as well as his ties to the Treasury, that he became a wealthy man by the end of the first Spanish period. At the age of 23, he negotiated a treaty between the Uchise (Creek) Indians and Spain, which resulted in enduring peace between the two groups. That same year he married María Sanchez, a St. Augustine criolla. They had at least six children, and lived just south of the plaza between Marine and Charlotte streets. Don Elixio is perhaps best remembered for his authorship of the 1763 map that listed and located the buildings and property owners throughout St. Augustine. He prepared it as the original agent representing the departing Spanish families in the future sales of their Florida property. Even after his departure from Florida, he continued to rise in the Crown bureaucracy, and maintained his diplomatic, economic and social ties with the Florida Indians.

Back to Timeline Next → Part V: Spanish Exodus