When the first Spanish period ended in 1763, the incoming English authorities asserted that any Spaniards who remained in the colony under their rule could freely practice Catholicism. Nevertheless, only three or four people elected to remain in Florida, and a mass exodus took place in 1763 and 1764.

Their hasty departure made it impossible for the Spaniards to sell their property before they left. Most of them placed their properties in the care of the respected and influential Elixio de la Puente.

Puente was unable to sell the properties during 1764, and remanded their titles (in a somewhat mysterious arrangement) to a longtime English resident of St. Augustine, Jesse Fish. Fish promised to sell the land at the highest market prices once new settlers arrived, but ended up owning much of the property himself, becoming wealthy in the process. 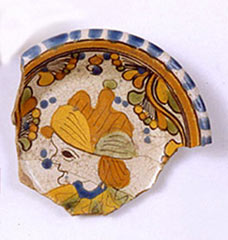 Throughout the first Spanish period, Majolica had been the preferred tableware, and was a ubiquitous symbol of Spanish identity. That ended with the evacuation of 1763. Even after the Spaniards regained control of the colony in 1781, they continued to use the mass-produced and widely -traded English refined earthenwares which became commonplace during the British occupation. Majolica fragments are rare in second Spanish period sites of St. Augustine. 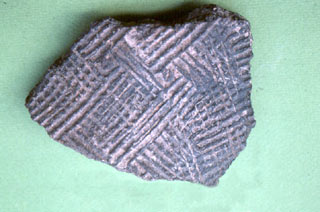 Both Spanish and American Indian émigrés packed up their belongings for the trip to Cuba in 1763. This fragment of Guale San Marcos pottery – the dominant kitchen ware for both Spanish and Indian households in first Spanish period St. Augustine – was excavated in Havana. It could have been used by Spanish, Indian or African immigrants to Cuba. 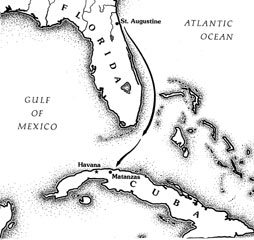 Map of evacuation to Cuba 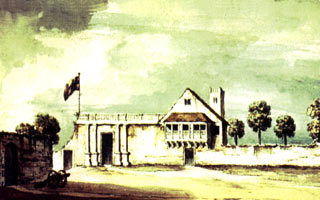 View of the Governor’s house in St. Augustine in 1764. This building, still known today as “Government House,” was occupied by both Spanish and English governors of the colony during the eighteenth century. 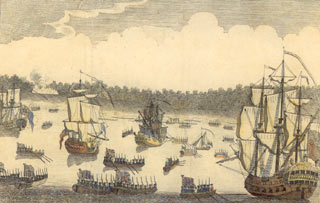 “A view of the landing of the English forces on the Island of Cuba, June 1762” This scene ultimately brought two centuries of Spanish occupation in Florida to an end. 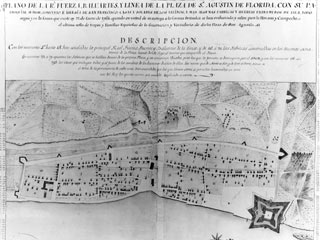 When Elixio de la Puente became the property agent for the departing Spanish landowners, he made this map that identifies the owners and characteristics of all St. Augustine properties in 1763. It is probably the most valuable source for both archaeologists and historians interested in identifying the households of eighteenth century St. Augustine. 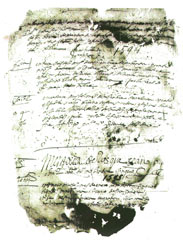 When the Spaniards evacuated Florida in 1763, they took with them all of the government and church records, including the registers of births, deaths and marriages. The Parish registers cover the period from 1594-1763, and have been the most important source for learning about the Spanish period residents of St. Augustine. The first surviving entry is on June 25, 1594, and records the baptism of an infant named María. Copies reside in both Havana and Florida.

Few people in colonial Florida have caused so much speculative debate as Jesse Fish. Fish was born in 1724 or 1726 to an English merchant family in New York, who sent young Jesse at age ten or twelve to live in St. Augustine with a Spanish merchant family, the Herreras. He was to learn the language, customs and land of Florida, presumably to establish strong economic connections. This he did, eventually serving as a resident trade factor in St. Augustine for the powerful Walton trading firm of New York, and even running blockades during the Seven Years’ War (1756-1763) to bring meat and flour to St. Augustine. The Spanish residents at that time saw him as a savior. When Florida changed governments in 1763, Jesse Fish was one of the few who stayed in St. Augustine, and ended up holding much of the land in St. Augustine through a poorly understood arrangement with Elixio de la Puente. He also acquired a large number of African slaves during the last years of Spanish rule, perhaps speculating that the soon-to-arrive British settlers would need laborers as well as land. Between 1752 and 1763, 204 enslaved Africans were brought to St. Augustine. Jesse Fish was listed as the owner of 66% of them (133), and the rest by other British merchants. Only 2 of the 204 were brought by Spaniards. (Landers 1999:269-74)

Manuel Riso was a Timucua Indian born in 1662. He was listed as living alone in one of the 11 households at Nombre de Dios in 1759, and at the age of 94, was one of two Timucua speakers who emigrated to Cuba with the Spanish exodus of 1763. Probably no other person in Florida had seen as much change, destruction and growth as Manuel had when he left for Cuba.

Back to Timeline Next → New Arrivals

Notes: A detailed account of the Spanish exodus to Cuba, and the transfer of St. Augustine to the English.