Expansion of Missions and Ranches

By the middle of the seventeenth century, the Franciscan mission effort had expanded northward to the Carolinas, and westward to present day Tallahassee. It is estimated that there were seventy Franciscan missionaries in some forty Spanish doctrinas in Florida, ministering to about 25,000 Apalachee, Timucua, and Guale Indians.

Besides conversion to Christianity, the missions organized the Indians to provide food for the Spanish colonists after Governor Méndez Canzo implemented a tribute of corn from the Indians in 1595.

Even more aggravating to the native inhabitants was the imposition of labor obligations both to transport the tribute corn to St. Augustine and to do work in the town itself. These measures contributed greatly to the Indian rebellions of this period.

The headquarters and motherhouse for the Franciscans – the Convento de San Francisco – was rebuilt in 1605 following the disastrous fire of 1599. It was from here that the extensive mission system of La Florida would be administered for more than a century, and to here that friars and Indians from the far flung mission fields came.

The chapel of the convento was where the elite members of the community heard Mass and were buried, while the rest of the residents went to the Parish church of Nuestra Señora de la Soledad. 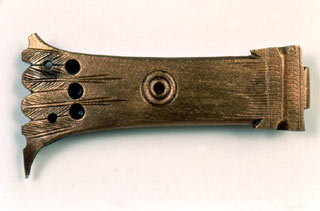 This brass book hinge probably served as hardware on a Franciscan missal. At least two identical clasps have been found at Florida mission sites. 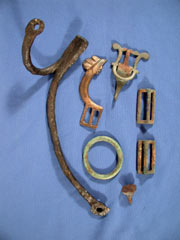 Horses were scarce, restricted to wealthy officials in early Spanish Florida. They were expensive to purchase, difficult to transport, and costly to keep. This changed somewhat in the seventeenth century, as ranches and enterprising Indian towns in the interior began to raise horses. After the destruction of the missions in 1702, the horses and cattle left behind multiplied and became feral, and during the eighteenth century were captured, rounded up and broken by mulato and black “cowboys”. A 1759 account noted that “the fat horses (reach a height) of seven or more hand spans, and are broken with little effort”(Griñan report p. 11). By then there was a cavalry company in St. Augustine, who made use of these horses. Although harness and spur elements have been found archaeologically, very few horseshoe fragments have been excavated from first Spanish period sites. 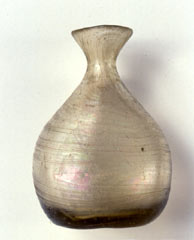 Identical examples of this delicate glass vial have been found in at least two seventeenth century Spanish mission sites, and may have been a standard part of the missionaries’ supplies, used for holy oils or medicines. 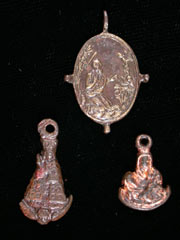 The Franciscans, along with a great many Spanish Catholics, were fervent devotees of the Virgin Mary, and were particularly committed to the devotion of the Immaculate Conception. Religious medallions and images of the Virgin Mary are among the most common religious items of the seventeenth century. 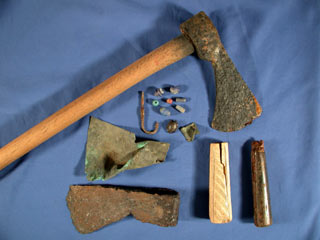 By the middle of the seventeenth century, the mission effort was actively underway in the Eastern Timucua, Guale, Western Timucua and Apalache Indian provinces. Indians from all of these areas frequently came to St. Augustine as part of transport convoys, and also as part of labor drafts to work in the town. Although Indians from the mission provinces had little choice about serving in the labor drafts, they were “paid” wages in goods, or less commonly, money. Typical items of payment included hawksbells, knives with black or white hafts, blue beads, multicolored beads, sheet brass, red cloth, razors, scissors and hatchets. 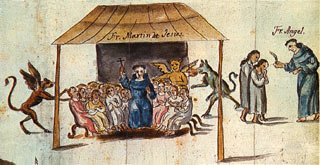 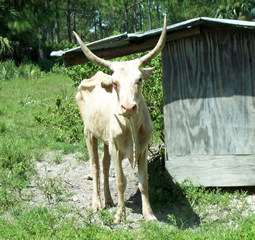 The relatively small, wiry long horned cows still found today in Florida (Florida scrub cattle) are thought to be descendants of the seventeenth century cattle of the Spanish ranches in the Florida interior.

An illustration from Father Pareja’s 1613 Confesionario, showing demons carrying off an unconverted person. The Confesionario was written in Timucuan and Spanish. 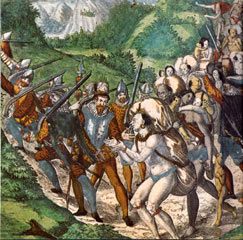 Without roads or draft animals in La Florida, Indians from the mission provinces became the Spaniard’s beasts of burden to carry corn from the interior to St. Augustine. Once in the Spanish town, they often were obligated by the Governor to labor on public works, or as servants in the homes and fields of Spaniards. Despite Franciscan protests about this treatment, these onerous obligations, among others, led to several rebellions against the Spaniards.

To Spaniards, civilized life meant life in towns and with churches. They strongly disapproved of Christians “living on the land” away from the watchful eyes of priests. Authorities were especially outraged by the many African and Indian slaves who escaped bondage and formed hidden communities which were, in the eyes of the Spaniards, illicit. These escapees were known as “cimaronnes”, and were a fact of Spanish colonial life from the earliest years of the sixteenth century onward. Shown here is a statue of Lemba, the first black cimarron in Spanish America, who led a successful uprising in 1522 in Hispaniola. Florida was no exception, and although no large communities of cimarrones have been documented during the colonial period, there were always some Africans and Indians (like María Jacoba, featured among the people in this section) living as fugitives in remote places. 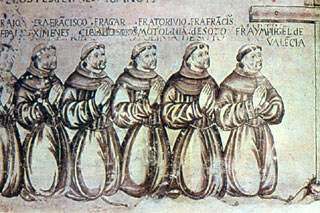 María was a Potano Timucua born around 1648 in the mission village of San Francisco de Potano (near present day Gainesville). Shortly after her marriage at age 14 or 15, she “went to the woods” with an escaped black slave, and returned to her village and husband for a few days once a year to say confession. She lived this way for 14 or 15 years. Considered a cimarron – an illegal runaway – she was captured by rancher Captain Tomás de Menéndez when she was in her late 20s, and he sent her to St. Augustine for enforced servitude in his house. She ran away in turn from St. Augustine, but was recaptured in the company of murderous heathen Indians. In 1678 she was tried in St. Augustine for her crimes of cimarronage and association with the heathen “criminals”, and sentenced to 100 lashes. It is not known whether she survived them.

As a peninsulare governor of Florida from 1633 to 1638, Horruytiner approved the advance of mission evangelization into the Apalachee mission province, and, not coincidentally, a shipping port on the Gulf of Mexico. This opened large areas to the Spaniards for cattle ranches and farms, and Horruytiner made grants to several important St. Augustine families. He himself remained in St. Augustine after his term as governor, and established a family dynasty that became wealthy from ranching and trading.

Apalachee Indian laborers and counterfeiters Andres De Escovedo and Ajalap Cosme, both in their early 20s, were born at the San Luis mission town in the 1670s. They were in St. Augustine “under contract” to a Spanish soldier, Patricio de Monson, in the 1690s tilling his fields. Andres stated that he “has no other trade than to render service in what he is ordered to”. The men were caught counterfeiting half real coins and were sentenced to forced labor on the public works.

Father Pareja arrived in Florida in 1595, and was assigned to minister to the Indians at San Juan del Puerto, a Timucua mission near present-day Jacksonville. During his more than 30 years in service to the Franciscans in Florida, Pareja not only ministered to the spiritual needs of his Christian charges, but he also wrote several books in the Timucuan language. These included a dictionary and grammar, catechisms and devotional scripts that were read widely by the Timucuan converts. For other missionaries, he wrote the Confesionario, a remarkable document that provides questions in Spanish and Timucuan, designed to elicit admission of forgotten (or perhaps unrecognized) sins by the Indians during confession. Pareja also served as a leader and spokesperson for the Franciscan contingent throughout his tenure, and spent long periods at the Convento de San Francisco in St. Augustine.

Back to Timeline Next → Part IV: The Castillo Years