How Long Do Sawfish Live

Lesson: How Long Do Sawfish Live?

Lesson Summary:
This lesson compares shark centra to tree rings. Shark centra are used instead of sawfish centra since sawfish are endangered. However, the principle is the same across the elasmobranches which include sharks, rays, skates, and sawfish. By determining that shark centra do record annual growth lines similar to what is observed in trees, conclusions can be made about the age of the shark from which the centrum in the “Sawfish In Peril” teaching kit came from.

Background Information:
Shark centra (similar to our vertebrae) are useful in determining the age of elasmobranches which includes sharks, rays, skates, and sawfish. Members of this subclass of cartilaginous fish record annual growth rings corresponding with the seasons similar to the growth rings found in trees. Dark bands indicate seasons of slower growth rates typically during the winter months while lighter bands represent faster growth rates during the summer months in both elasmobranches and tree rings. By counting these bands, we can determine the approximate age of the shark at the time of their death. This method has been tested in different species of sharks, rays, and skates. However data is currently lacking for sawfish primarily due to their endangered status.

Procedure:
Begin this activity by passing around the shark centra and tree section that is included in your “Sawfish In Peril” teaching kit. Ask students if they notice any similarities between the two specimens. Also be sure to ask if they know what the rings represent. Give the students their activity sheets and ask them to determine the age of the tree section, then the ages of the different centra drawings by counting the number of annual growth lines. Discuss how the wider growth rings represent more growth per year than the narrower growth rings and how much faster one shark grew than the other when comparing the centra drawings on the activity sheet.

Discussion Questions:
How are shark/sawfish centra similar to trees? Are the lines in shark centra laid down annually? How can growth rings in the centra be used to compare growth rates with other sharks?

How Long Do Sawfish Live? 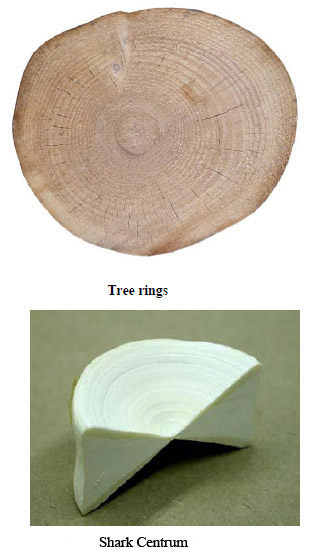 Shark centrum: cut in half, you can see the “bowtie” which is then finely sliced and viewed under a microscope to determine the number of growth rings accurately.

How Long Do Sawfish Live?

Sawfish can live a long life – how can age of a sawfish be determined?
Sharks have centra analagous to human vertebrae, from which age can be determined
similar to tree rings.

How would you test the hypothesis that each ring in a shark centrum represents one year in the life of a shark?

Based on the drawings below based on centra from captive sharks, what conclusions can you draw about your hypothesis?

Can you determine the age of the sawfish centrum below? If so, how old was it when it died? 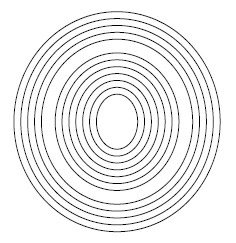 Extra Credit: Why do you think some growth rings are wider than others? Determine the age of the shark centrum included in the “Sawfish In Peril” teaching kit. Compare your answer with the answers of other students. If other students come up with different answers, why might this be?