How to Avoid Shark Attacks

Sharks are important predators in the marine world. They have a reputation as bloodthirsty killing machines, but this view is distorted. Sharks are not unique in consuming animals. For example, humans are predators, eating cattle, pigs, chickens, fish, and other creatures.

As apex  (top) and meso (mid-level) predators, sharks limit the populations of the animals they eat. This maintains the balance of nature. Sharks occasionally do bite humans, but most bites are feeding events. Sharks sometimes grab humans by mistake. Other times a bite may protect a shark’s space, much as a dog barks at and bites intruders.

The yearly average of unprovoked shark bites on humans globally is 70, resulting in about 5 deaths. These worldwide numbers are small given the millions of humans that enter the water. You have a better chance of dying from a bee sting, a dog or snake bite, or lightning than from a shark bite. You can look at some of these odds on our comparing risks page here.

Tips to Reduce Your Risk of Shark Bite

Although the relative risk of a shark bite is very small, risks should always be minimized whenever possible in any activity. The chances of having an interaction with a shark can be reduced with these tips: 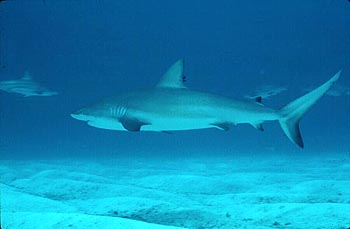 Unprovoked bites are defined as incidents in which a bite on a live human occurs in the shark’s natural habitat with no human provocation of the shark. These represent the most natural examples of shark behavior and are our most widely used data category in research. These events include; mistaken identity hit and run during low visibility conditions, investigation, and on infrequent occasions predation. All of the data publically available on the ISAF website is from unprovoked incidents. This can take three forms:

Although sharks rarely kill humans, humans are killing millions of sharks per year through commercial fishing. Some of this is targeted and some is via accidental or bycatch.

Sharks are blessed with outstanding senses of smell, taste, hearing, and sight; the ability to detect minute changes in water pressure and electromagnetic fields; and other attributes that make them nearly invincible in the sea. Yet they are quite vulnerable to a baited hook and the stress of the fight on a line can be too much for some species to survive. In many areas of the world sharks are becoming overfished and some species are seriously threatened. That said sustainable fisheries for sharks do exist. Many right here in the USA.

More and more people understand that sharks are a valuable part of the ocean environment and many species must be protected. Fishery management plans have been developed in many areas, but similar action is needed in many other regions. Certain species, such as the white, sand tiger, whale, and basking sharks, have received special governmental protection in some countries.