On February 9th, 1981, Arthur C. Allyn, Jr. signed an agreement transferring the assets and collections of the Allyn Museum to the University of Florida Foundation to ultimately be housed in a new wing of what was then called the Florida State Museum. The Allyn Museum, located in Sarasota, Florida, operated as an off-campus unit of the Florida Museum for 24 years until the McGuire Center opened in 2004. Together with the Lepidoptera holdings of the Florida State Collection of Arthropods and the UF Zoology Department, it formed the nucleus for our ever-growing world-class center for Lepidoptera research. We take a look back at the early days of lepidopterology in Sarasota and the enduring legacy of Mr. Allyn’s generous gift.

Like many Lepidopterists, Mr. Allyn’s passion for butterflies began with a local childhood collection which as an adult he expanded with purchases of specimens from around the world. These included several very famous collections such as those of Rousseau-Decelle, V. Sasko, and W.J. Kaye. As a businessman managing diverse interests of the family company, by 1968, his Lepidoptera collection grew beyond his ability to continue its care and development as a premier scientific resource. Thus, he sought and found the help of professional staff to curate his collection, then located in Chicago, Illinois.  As a result, his new hires, Lee and Jacqueline Miller, began long and rewarding careers as Allyn’s curators which led them from Chicago, to Sarasota, and finally Gainesville. 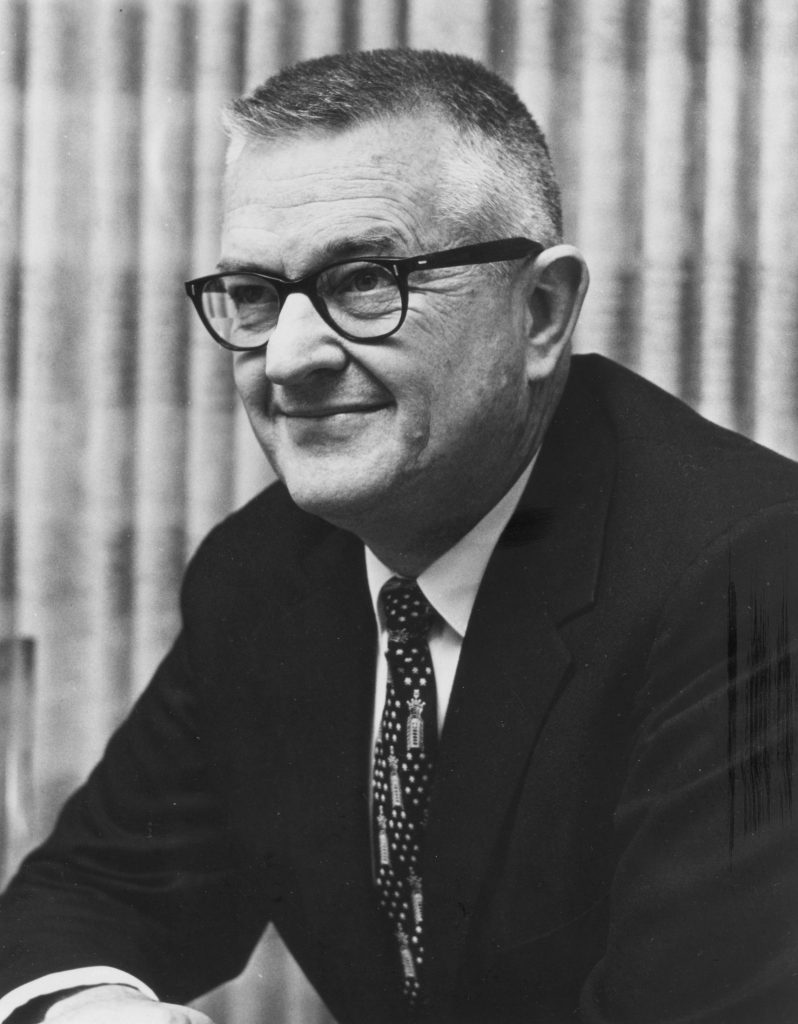 Arthur C. Allyn, Jr., former co-owner of the Chicago White Sox, had many business and philanthropic interests. His ultimate passion, however, was collecting and studying butterflies which led him to establish the Allyn Museum of Entomology. 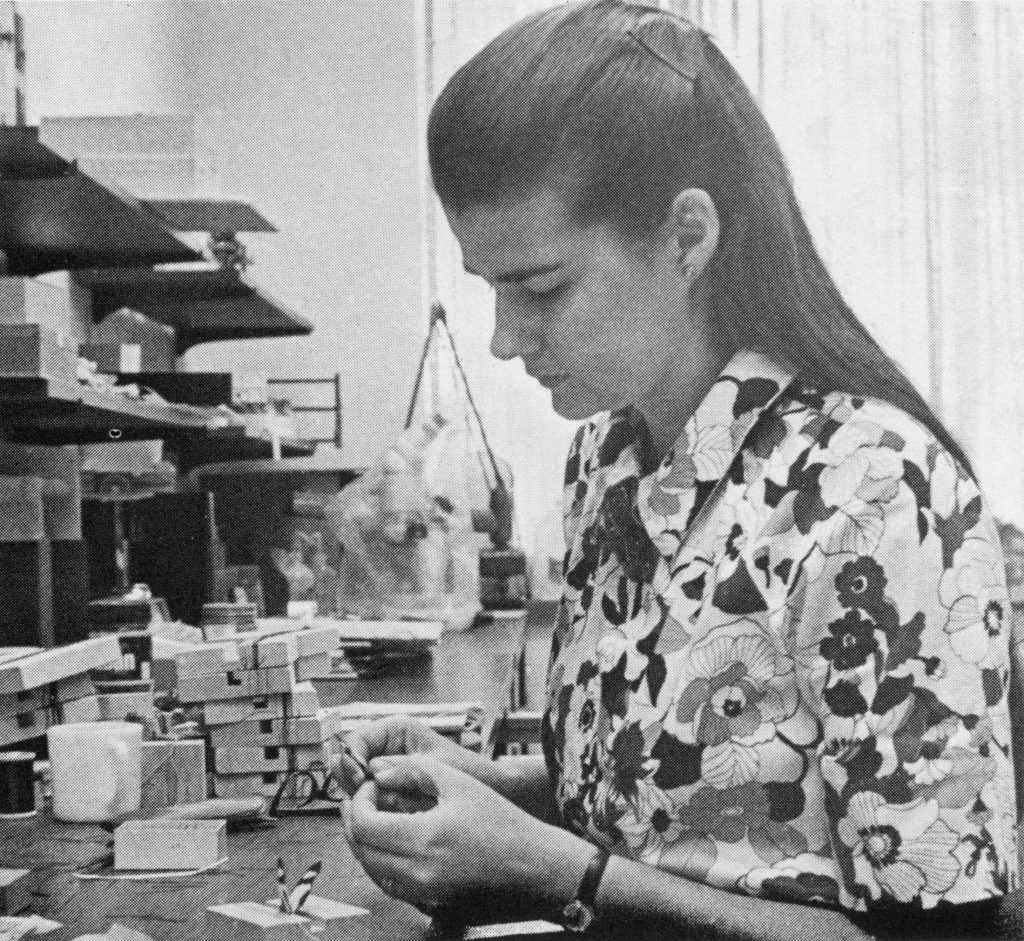 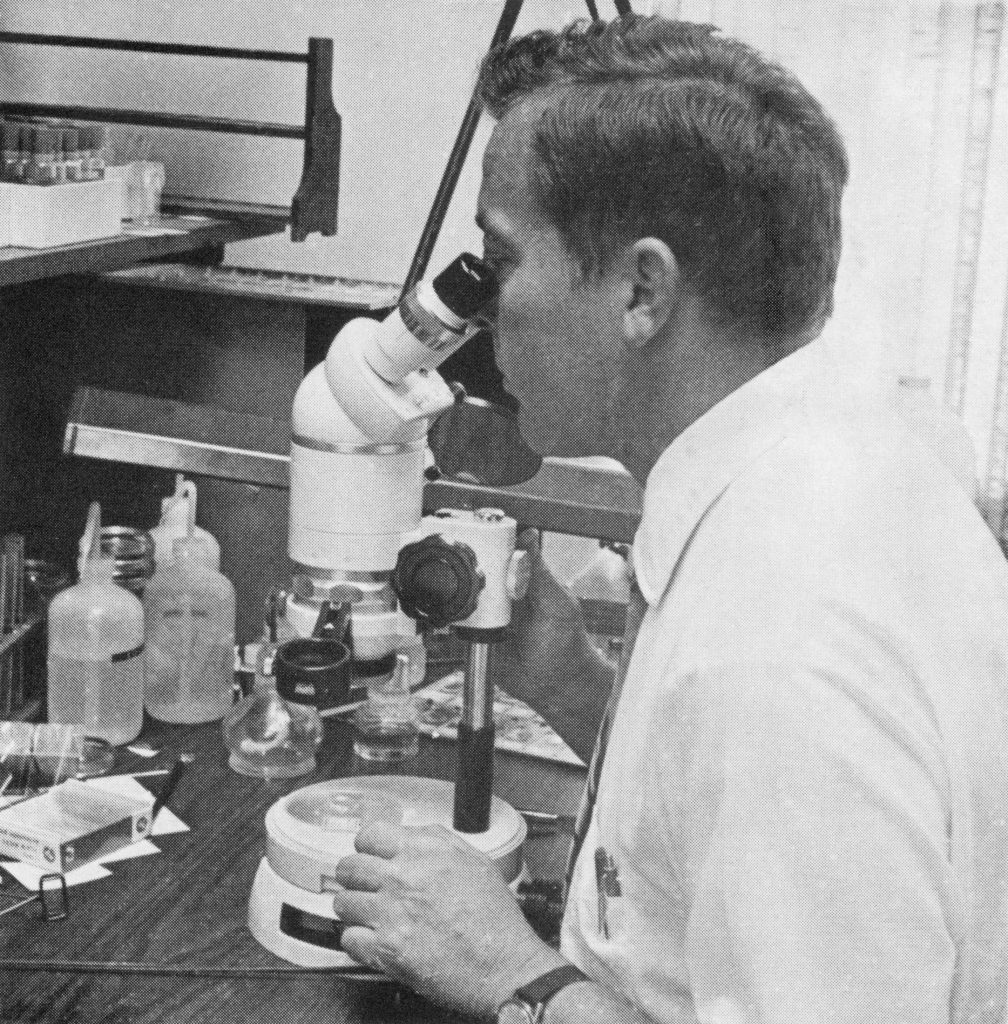 With multiple business and philanthropic interests in Sarasota, it was an ideal place for Allyn to move his museum. The museum was initially located in the Sarasota Bank and Trust Company Building until Allyn, owner of the Sarasota Jungle Gardens, designed and constructed a new facility next door to the gardens. Located in a quiet neighborhood adjacent to Sarasota Bay, the front of the building faced Bayshore Road, while the rear entrance bordered one of the Jungle Gardens’ paths. Employees and researchers entering through the back door were greeted each day by a thick wall of tropical foliage and the exotic calls of peacocks and parrots emanating from the gardens.

The new building was dedicated on March 15th, 1973, with family, friends, and several prominent lepidopterists in attendance. In June of the same year, the museum hosted the 24th Annual Meeting of the Lepidopterists’ Society. From that point on the museum continued to gain worldwide recognition and had a steady flow of visiting researchers, some, including Steve Steinhauser, Dale Jenkins, John Downey, and Nadia Venedictoff, later moving to, or staying in Sarasota for extended periods of time. 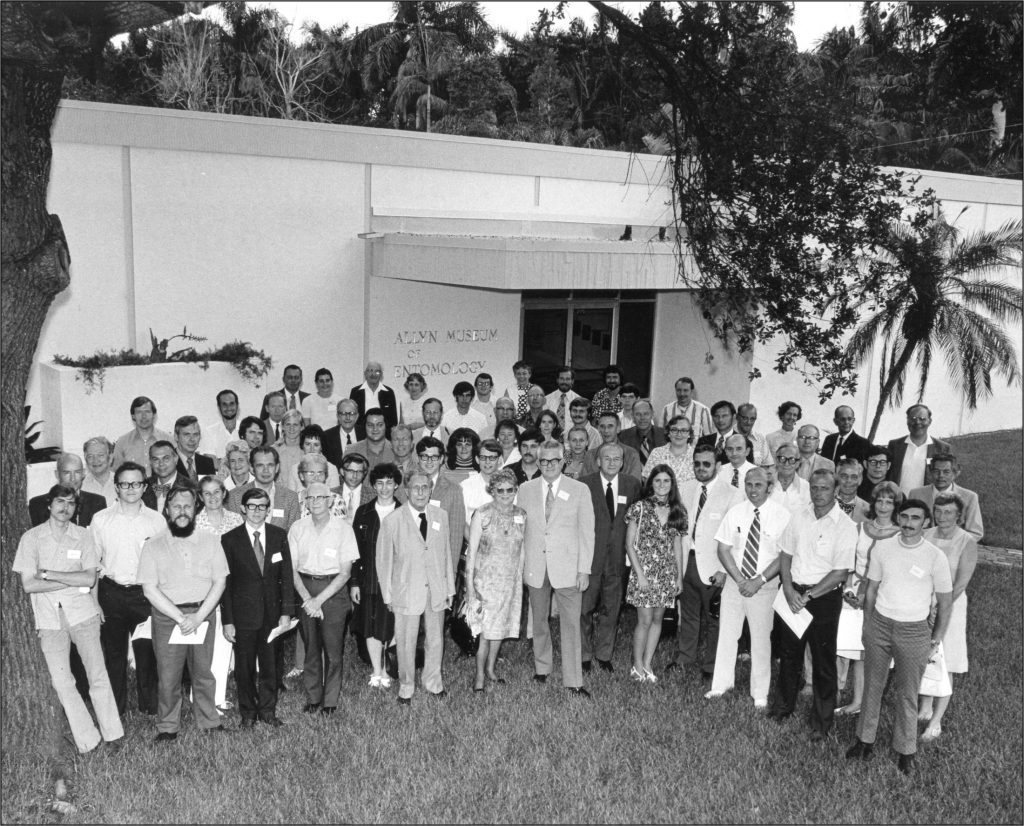 Participants in the 24th Annual Meeting of the Lepidopterists’ Society.

The 24th Annual Meeting of the Lepidopterists’ Society was held at the Allyn Museum the same year the new building opened in 1973.

The 5,500 square foot building was divided into two main sections.  One side included the main reception area with two adjacent offices, a Scanning Electron Microscope (SEM) lab, darkroom, rearing room, two curator offices, and a large, combined library/meeting room. The other side contained the main collections room. Originally, the main collections room included series of cabinets and shelves. Space was generally not an issue but the collections continued to grow at a rapid rate. Compactors were just starting to be used at other institutions and recognizing their utility, Mr. Allyn contracted for the installation of a new state-of-the-art motorized unit in the main room and the back section was divided into three cubicles, one dedicated to specimen preparation and two for resident research associates.

Although there were two large glass display cases in the front reception area, the museum was not open to the public but did host special events and tours. There was a large public display next door at the Jungle Gardens, put together by the Millers, which featured a whole wall glassed in with an outline map of the world and representative butterflies pinned into their respective regions. The Millers were also very active in community outreach, assembling numerous temporary displays for stores and public events and they were frequent invited speakers at schools and local societies and garden clubs. A large display was also prepared by the Millers for the former Cypress Gardens theme park’s “Wings of Wonder” exhibition. 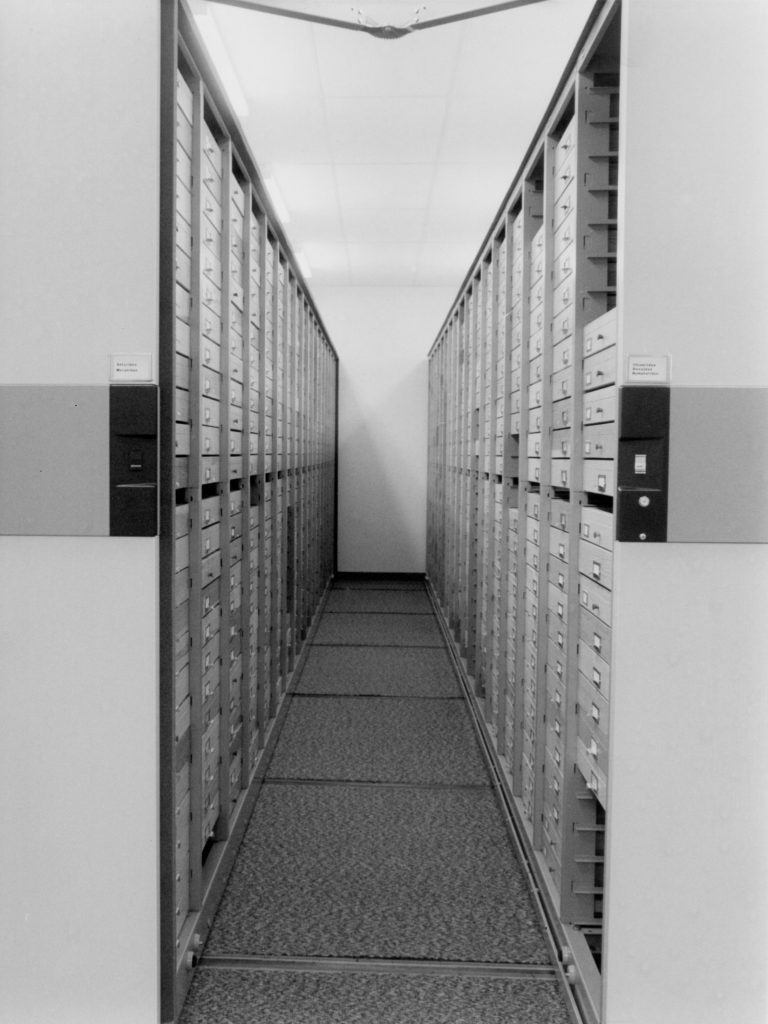 As the collections grew, it became necessary to house specimen drawers in a motorized compactor system mounted on tracks in the floor. A button was pushed on the selected aisle to open the compactor. 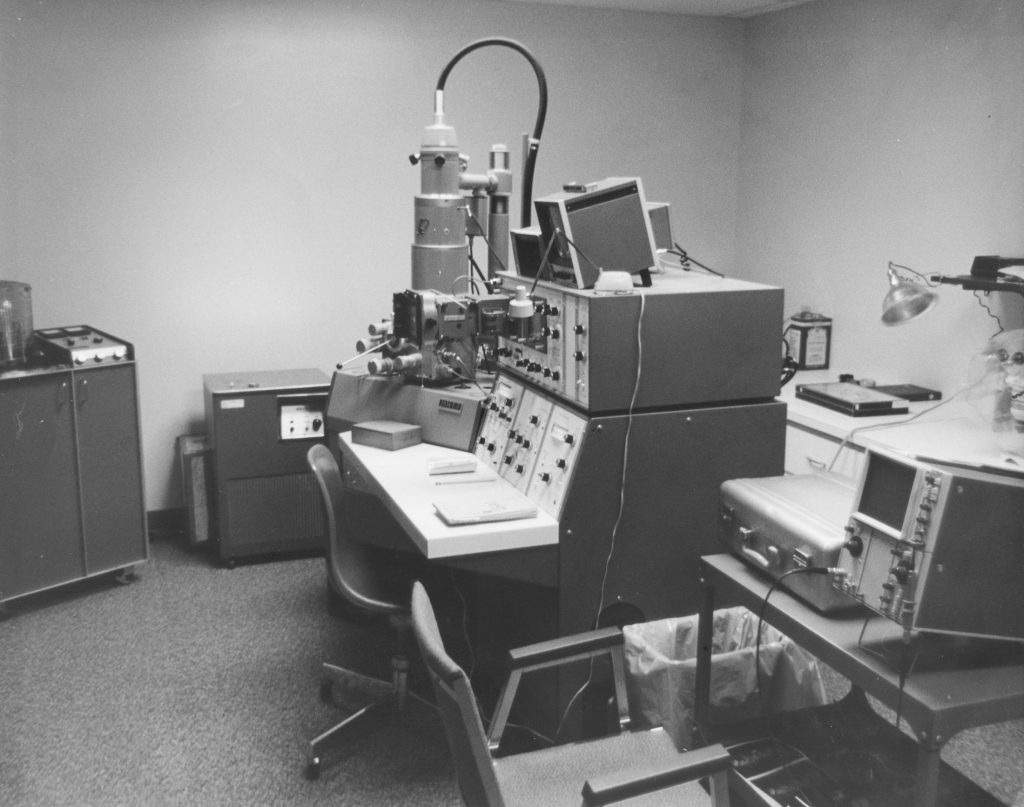 The scanning electron microscope at the Allyn Museum was the first of its kind along the Gulf Coast of Florida. Mr. Allyn often demonstrated the system and helped researchers from other institutions image tiny specimens. Allyn was particularly interested in the morphology of butterfly wing scales and how colors were produced with either pigment granules and/or different types of ridges that refracted light to produce the shiny metallic colors we see on butterflies like the blue morphos. 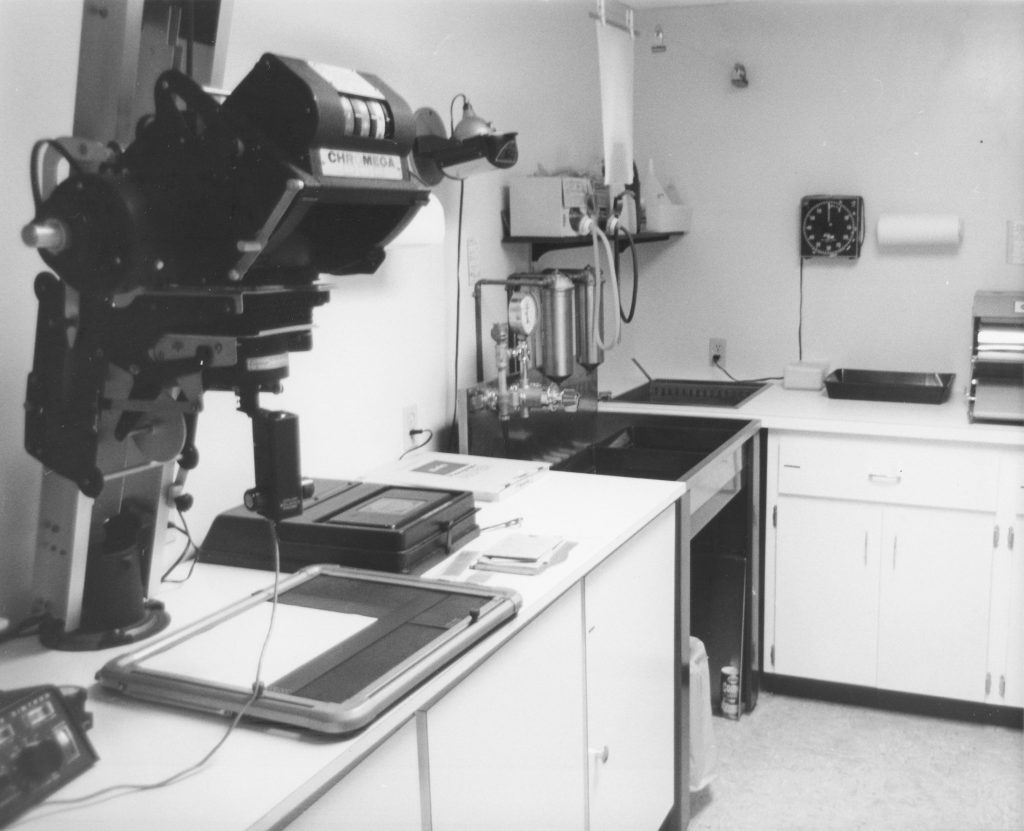 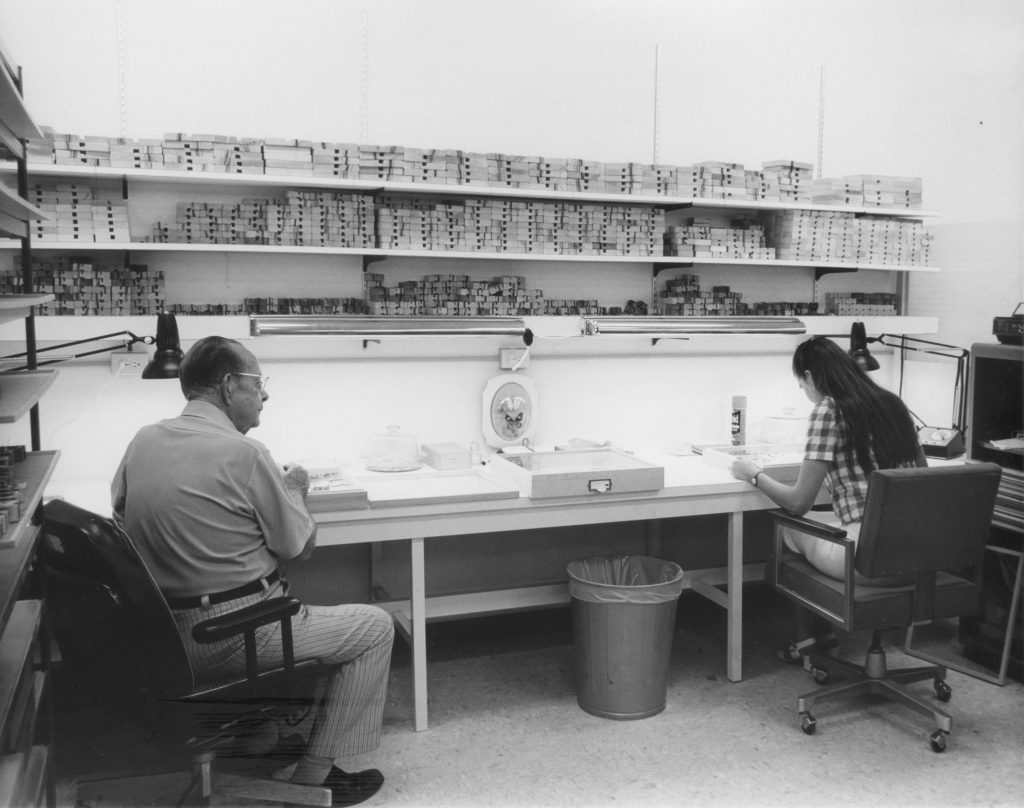 Jacqueline Miller and visiting researcher Vern King working in the preparation area of the museum where specimens were relaxed and pinned on mounting blocks allowing the wings to be properly positioned for drying. 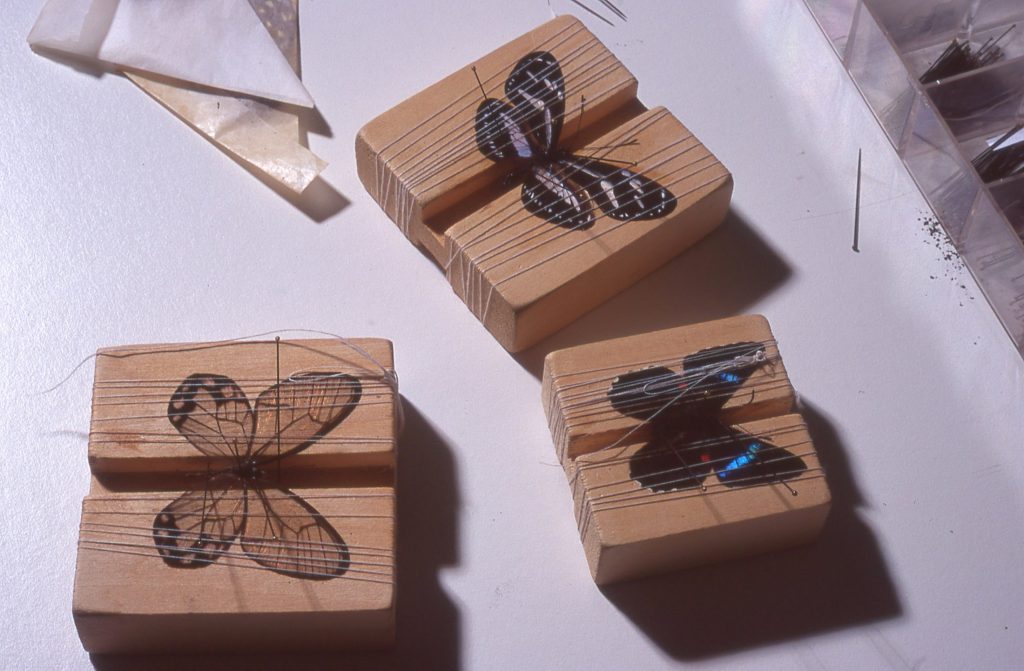 Instead of spreading boards, custom wooden blocks were used to prepare specimens. Thread was wrapped on the blocks to position and hold down the butterfly wings for drying. 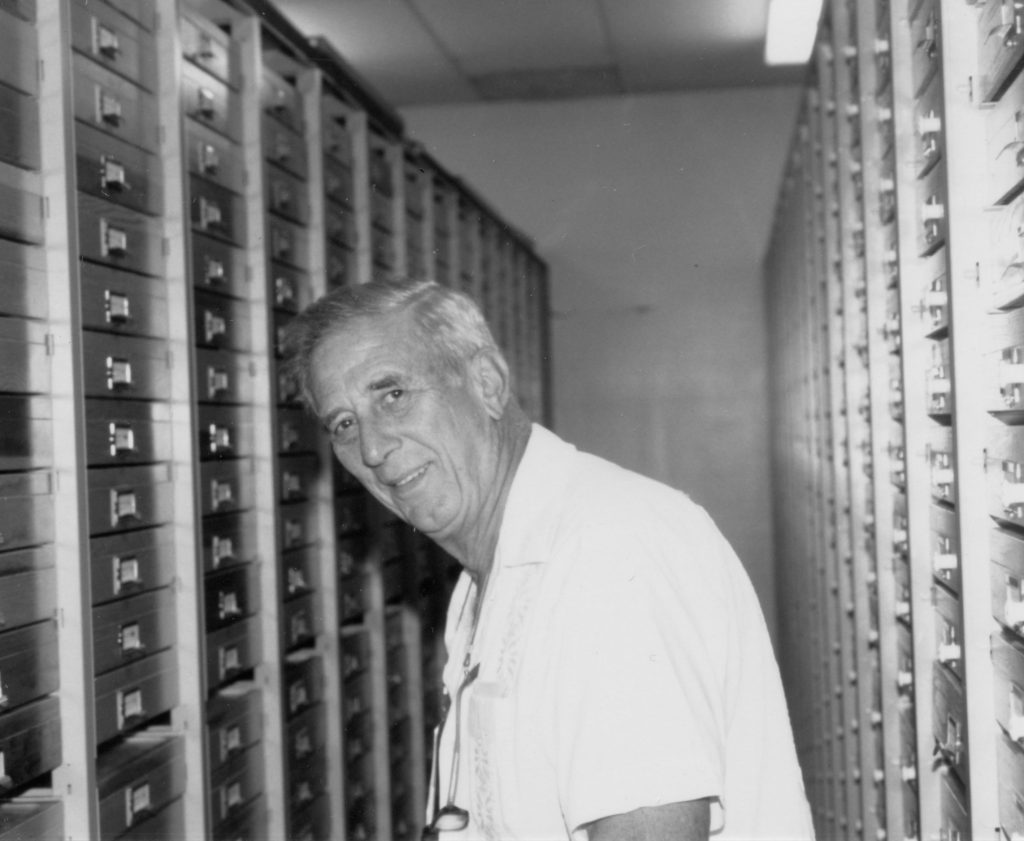 Stephen R. Steinhauser was a resident research associate at the Allyn Museum. He first visited the museum in 1973 and arranged to have his collection deposited there, finally moving to Sarasota in 1977. He was a skipper specialist and revised many groups of the family Hesperiidae. Many of his studies were published in the Bulletin of the Allyn Museum. 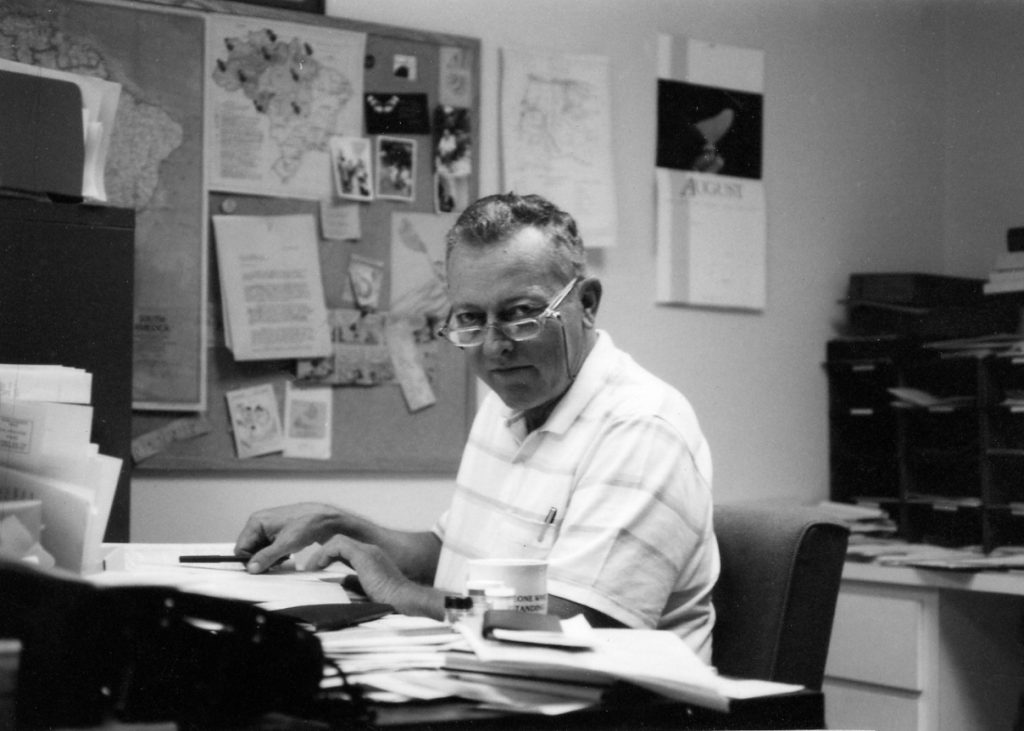 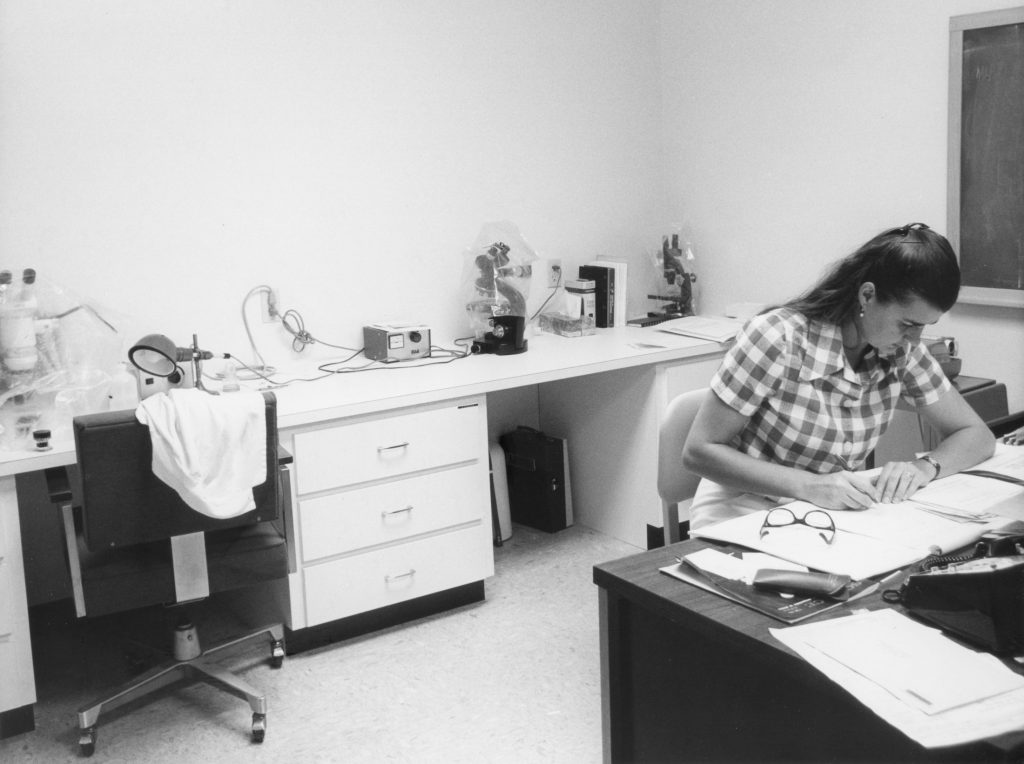 Jacqueline Miller working in her new office around 1973 soon after the new building was completed. 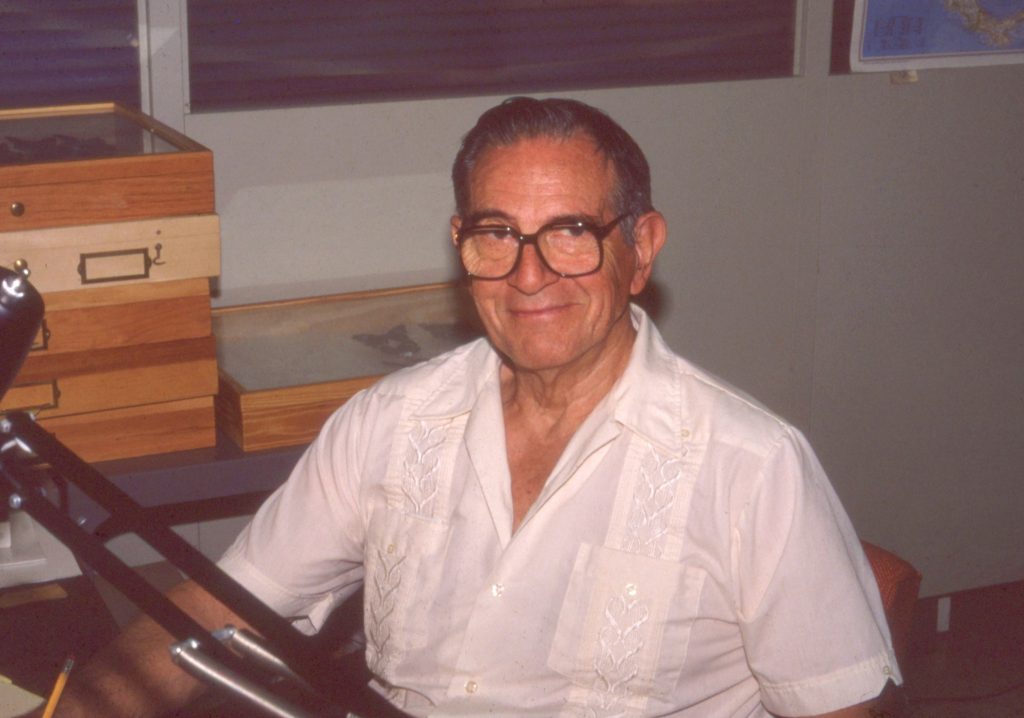 In addition to donations, purchases of significant collections, and exchanges with other institutions, the museum sponsored travel for various collectors to increase holdings of material from the poorly represented areas of the tropics, such as Central and South America, the West Indies, and Africa. New discoveries from these trips, along with Mr. Allyn’s SEM studies on the ultrastructure of butterfly wing scales and eggs, and the scientific contributions of staff and research associates were published in the Bulletin of the Allyn Museum, produced and edited by the Millers, and printed locally. 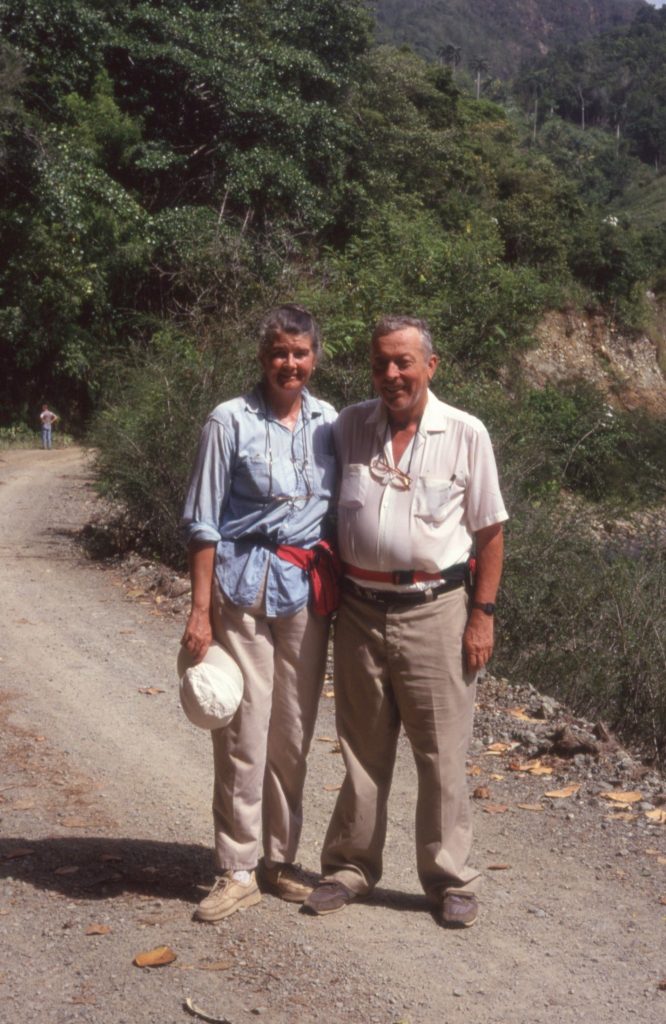 Curators Lee and Jacqueline Miller in eastern Cuba. In addition to Africa, Central and South America, the Millers traveled and collected throughout the West Indies, while preparing for their book entitled The Butterflies of the West Indies and South Florida which was published in 1994. 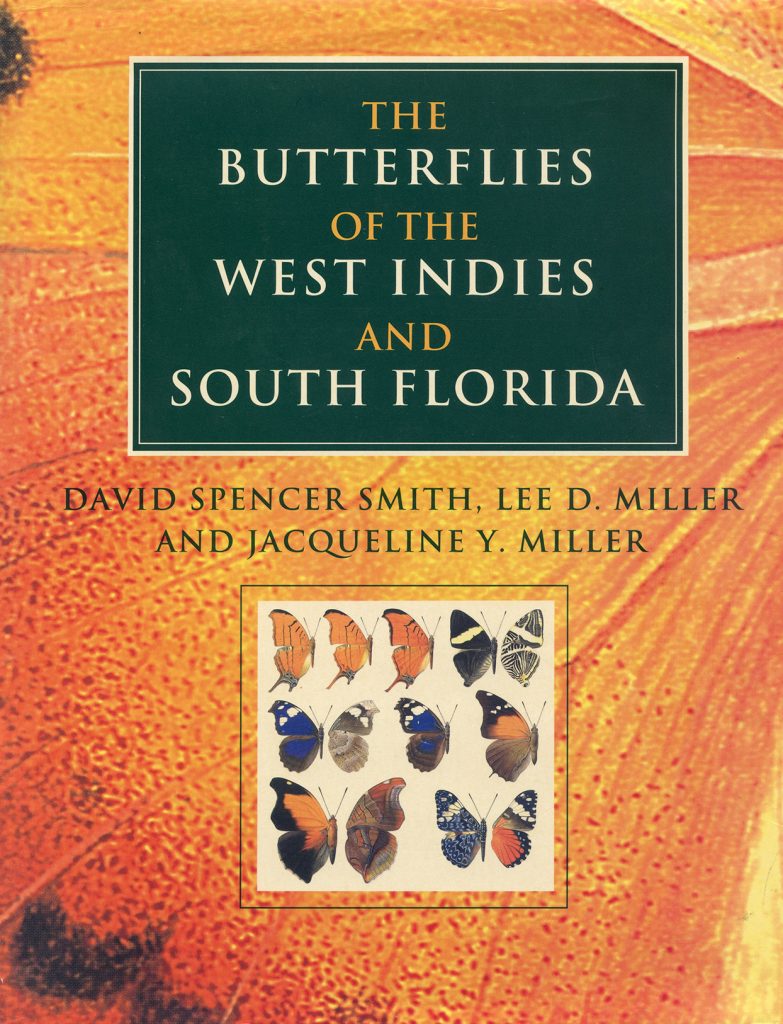 Together with David Spencer Smith, the Millers published The Butterflies of the West Indies and South Florida in 1994 which was based their own collecting activities as well as museum specimens from previous collectors. Numerous other papers from their work in the West Indies are published in the Bulletin of the Allyn Museum and elsewhere.

Even after Mr. Allyn’s passing on March 22nd, 1985, the museum continued to thrive and impact the lives and productivity of countless students and researchers. Along with actively curating the collections, maintaining their own research programs, and assisting or collaborating with resident and visiting researchers and graduate students, the Millers developed a close association with neighboring New College of Florida. They mentored many students with individual projects, employed student curatorial assistants to prepare specimens, and taught numerous courses in entomology, phylogenetics, and zoogeography.  As faculty members of the Florida Museum, they also took turns traveling to Gainesville to attend faculty meetings and regularly participated in Museum events.

Now at the McGuire Center, one can still see elements of the Allyn Museum throughout the building, from the vast numbers of specimens bearing Allyn Museum accession labels and cabinets full of historic and priceless type specimens, to equipment, specimen drawers, and furnishings. Even the original compactor unit was retrofitted and housed in our basement.

The Allyn Museum building in Sarasota now serves as an educational center for the Jungle Gardens to train interns and host camps. The building, which was donated to the Florida Museum along with the collections, was later sold back to the Allyn family who still own and operate the Sarasota Jungle Gardens. 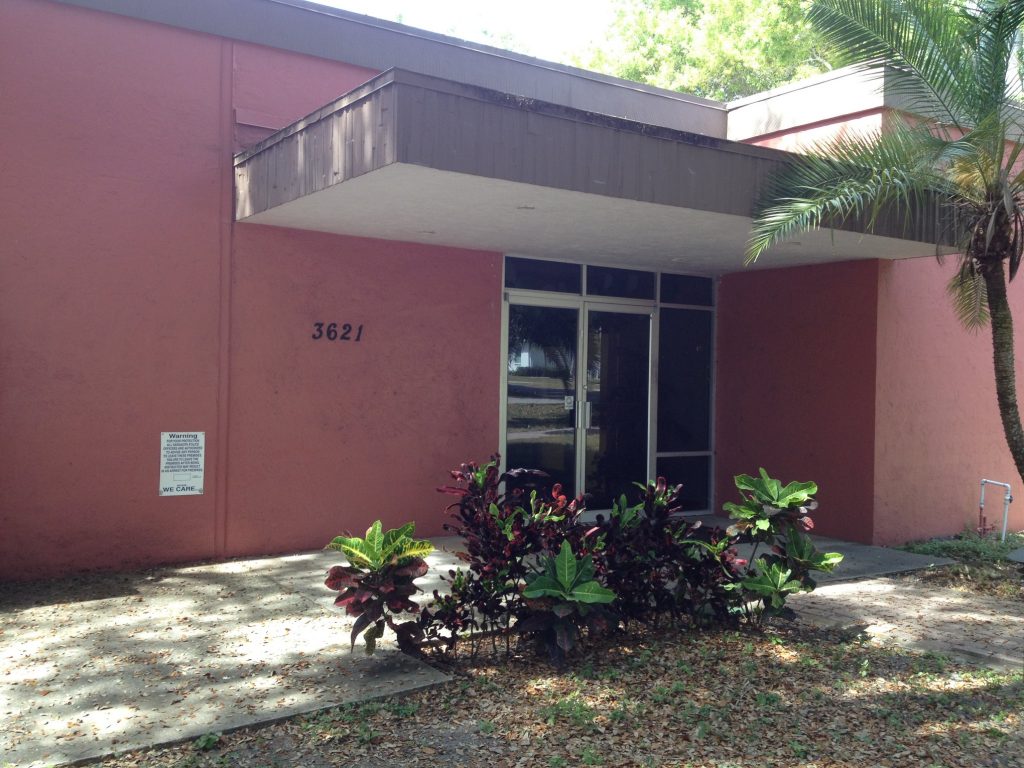 The former Allyn Museum building is now an educational center of the Sarasota Jungle Gardens. 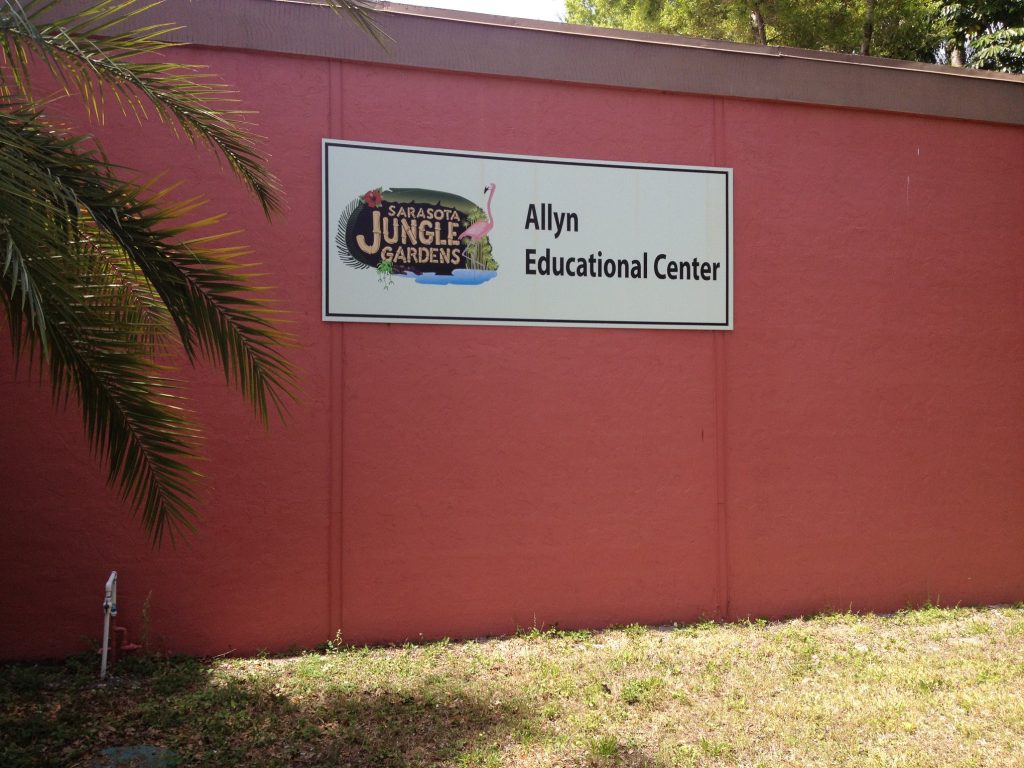 The former Allyn Museum building is now an educational center of the Sarasota Jungle Gardens.

Some additional information on the history of the Allyn Museum can be found in the following references: