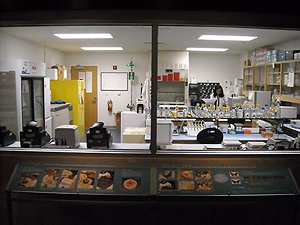 Genomic research sheds light on how various organisms and lifestyles evolved and how they are adapting to changing conditions today.

Much of the research in this lab focuses on sequencing (or mapping) DNA strands in the thousands of species of Lepidoptera. Researchers also sequence RNA, proteins and entire nuclear and mitochondrial genomes. Today, considerable research on the nature of life and relationships between organisms occurs at the molecular level. For example, scientists here study molecular patterns to reconstruct the evolutionary history of butterflies and moths and to help identify newly discovered species. The lab also is used to search for invasive species, and biodiversity assessments to examine how lepidoptera (and other wildlife) are being altered by human-based activities. Other genetic studies explore how parts of the Lepidoptera genome controls behavior, development, vision, and structures that they produce – such as caterpillar silks, for collaborative work with engineering. More than 15 students regularly use this lab. 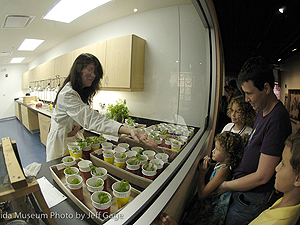 The lab’s current project focuses on a captive breeding program for the Miami Blue, Cyclargus thomasi bethunebakeri. Once abundant in South Florida, this small blue butterfly is now critically endangered. McGuire Center scientists are reintroducing the butterflies bred in this lab into conservation areas including Everglades and Biscayne National Parks. The goal is to increase population numbers in the wild and expand the range of this butterfly from one small remnant colony on Bahia Honda in the Florida Keys to historically occupied areas.