GAINESVILLE, Fla. ⁠— Bruce MacFadden, director of the University of Florida Thompson Earth Systems Institute and a distinguished professor and curator of vertebrate paleontology at the Florida Museum of Natural History has been named a 2022 Broader Impacts Champion by the Center for Advancing Research in Society (ARIS). The award recognizes those who have contributed significantly to establishing and advancing the broader impacts of scientific research.

Broader impacts is a phrase coined by the National Science Foundation that refers to the potential of a research project to benefit society. Since 1997, the NSF has required scientists to demonstrate how their research will impact the public good through submitting broader impacts activity plans as part of their grant proposals. 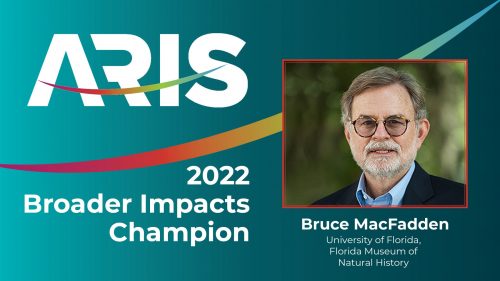 “Every year ARIS recognizes Broader Impacts (BI) Champions as tireless advocates for the impact of research in society,” said Susan D. Renoe, ARIS Executive Director. “We are proud to honor this year’s exceptional individuals for the contributions they have made to support and impact BI through their professional work. They truly are champions for broader impacts.”

MacFadden’s interest in becoming a paleontologist, like many children, was first sparked by a fascination with dinosaurs. He learned about them during his many trips with his mother to the American Museum of Natural History in New York City. In high school, after writing a term paper about fossils, MacFadden’s Earth science teacher, Mr. Greenstein, encouraged him to consider a career in paleontology.

“I didn’t really think you could do that,” MacFadden said.

The rest is history.

With a more than four-decade career under his belt, MacFadden has certainly made his mark as a scientist. He is the author of 200 peer-reviewed scientific articles and has been the principal investigator on more than 50 external grants totaling $40 million, mostly from the NSF. But at the same time, MacFadden has made it his personal mission to ensure science isn’t kept behind closed doors.

MacFadden played a key role in the development of the iconic Florida Fossil Hall at the Florida Museum, the entrance of which boasts gigantic, jaw-dropping shark jaws. Since 2006, he has taught one of the few graduate courses in the country focused on the broader impacts of science on society, which gives STEM students practical advice on education and outreach techniques. From 2009 to 2010, MacFadden served as a program officer at the National Science Foundation’s Research on Learning in Formal and Informal Settings Division. And from 2013 to 2017 MacFadden took groups of K-12 teachers to Panama to learn more about the geology and paleontology along the Panama Canal. These and other experiences sparked the idea for a book titled, “Broader Impacts of Science on Society,” which he published through the Cambridge University Press in 2019.

But, as he looks back on his career, MacFadden says one of his most rewarding and eye-opening experiences was during his time as a visiting scientist in the Santa Cruz County Office of Education in California. From 2015 to 2016, he visited about two-dozen classrooms, many on multiple occasions, teaching students about local fossils and paleontology. He also conducted STEM teacher training, led field trips, participated in local science fairs and presented talks to the school board and local civic organizations. While there he experienced firsthand the day-to-day operations of a public school district.

MacFadden thought back to Mr. Greenstein and how his teacher’s encouragement launched his lifelong career. He also realized how impactful it was for the students to see a scientist in real life.

“I was astounded at the amazement and delight on the faces of kids when they can understand that science can be fun,” MacFadden said. “And not just the rote memorization of facts from the textbook.”

The idea of bringing scientists to classrooms simmered until MacFadden saw the perfect opportunity to make it a reality. In 2019, shortly after the UF Thompson Earth Systems Institute was founded, the university’s president put out a call for “moonshot” proposals, or projects that had the potential to make a big impact on society.

In collaboration with Pasha Antonenko, an associate professor in the UF College of Education, MacFadden’s proposal for a program titled, Scientist in Every Florida School was funded. Since its launch in 2019, this pilot program has coordinated 3,100 scientist visits to Florida’s classrooms, reaching more than 2,500 teachers and 100,000 students.

“My involvement with schools has been immensely rewarding,” MacFadden said. “I feel we’re really giving back to society by helping improve STEM education in public schools.”

MacFadden says the work of bringing science to the public is never over.

“I am humbled and honored to be recognized for this award.”

Located at the Florida Museum of Natural History, the University of Florida Thompson Earth Systems Institute is committed to advancing communication and education about Earth systems science in a way that inspires Floridians to be effective stewards of our planet. More information is available online at https://www.floridamuseum.ufl.edu/earth-systems.