Each month, a student-led team at the UF Thompson Earth Systems Institute curates the state’s environmental news and explains what’s going on, why it matters and what we can do about it.

Subscribe today and get it delivered right to your inbox each month.

View past issues.
View all Earth to Florida posts or browse by categories below. 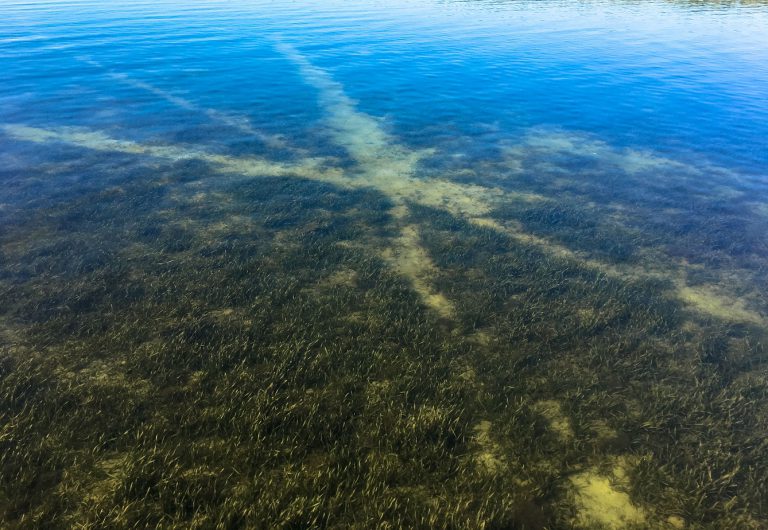 Vital to marine ecosystems, seagrasses provide food, habitat, shelter, and numerous other services for humans and aquatic organisms. These include the fish, crustaceans, and shellfish essential for Florida’s recreational and commercial fishing industries.

Read this feature story by Jessie Moses, published in collaboration with the UF/IFAS Nature Coast Biological Station, to learn how boaters can play a part in conserving seagrass communities.

Why Did the Panther Cross the Road?

How wildlife crossings help manage wildlife movement in the face of rapid urbanization.

Restoration efforts are aiming to restore the ability of forests to store our carbon dioxide emissions and slow the rate of global warming.

The Bellwether Bird of Florida’s Wetlands

What can snail kites can tell us about Florida's changing environment?

Red tide often affects the Gulf Coast of Florida during certain times of the year, like late summer. Not sure what that means for you, your family, and your pets?

This video by the Florida Fish and Wildlife Conservation Commission will teach you everything you need to know: what red tide is, red tide’s effects on health, and how scientists track and monitor red tide. Visit the following website for more information about red tide, including a daily sample map: FWC Red Tide

Learn more about Earth systems-related topics through our other student-produced educational videos!

To pair with the rest of our educational content in each Earth to Florida newsletter, we bring you monthly updates on statewide environmental news.

Action of the Week

We each play a part in protecting the water we rely on.

Action of the Week: Just Say No to Single-Use Plastics

Our world is flooded with plastic - and much of it is single-use. Learn how you can say no to unwanted plastics and use eco-friendly alternatives.

With the popularity of online shopping on the rise, there are steps that can be taken to ensure your shopping experience is as eco-friendly as it can be.

Environmental protection and social justice are deeply intertwined, and we cannot accurately communicate the environmental issues facing our state without acknowledging this relationship. In this monthly Earth to Florida segment, we will share articles and videos that help explain these connections.

Explore the posts below to learn about various environmental issues in Florida! Be sure to follow us on Instagram (@UFEarthSystems) for more!

Tell Me About: The Federal Emergency Management Agency (FEMA)

Tell Me About: Water Management Districts in Florida

Tell Me About: Southern Pine Beetle in Florida 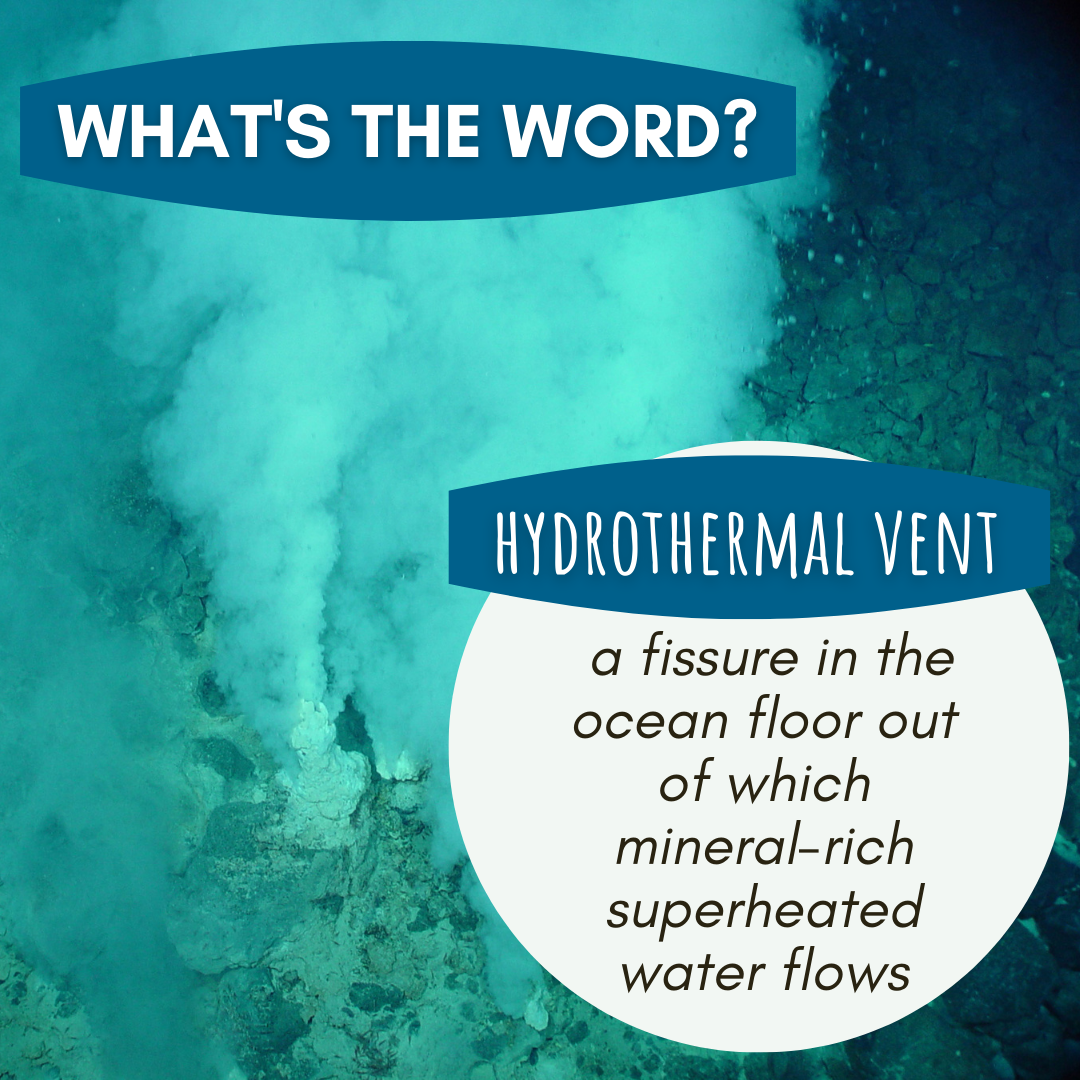 A hydrothermal vent is a fissure in the ocean floor out of which mineral-rich, heated water flows. The first vents were discovered in 1977 by scientists while exploring ridges near Galapagos Islands. Hydrothermal vents are formed along divergent tectonic plates in the deep ocean. “Hot springs” along the ocean floor, transport heat and chemicals that regulate the ocean’s chemistry. Most of the vent’s energy is obtained from volcanic gases. Some vents can even reach temperatures as high as 700 degrees Fahrenheit! Vents can be found all over the world including sites along the Mid-Atlantic Ridge, an underwater mountain range in the Atlantic Ocean. Info from the National Oceanic and Atmospheric Administration and National Geographic. Image from NOAA. 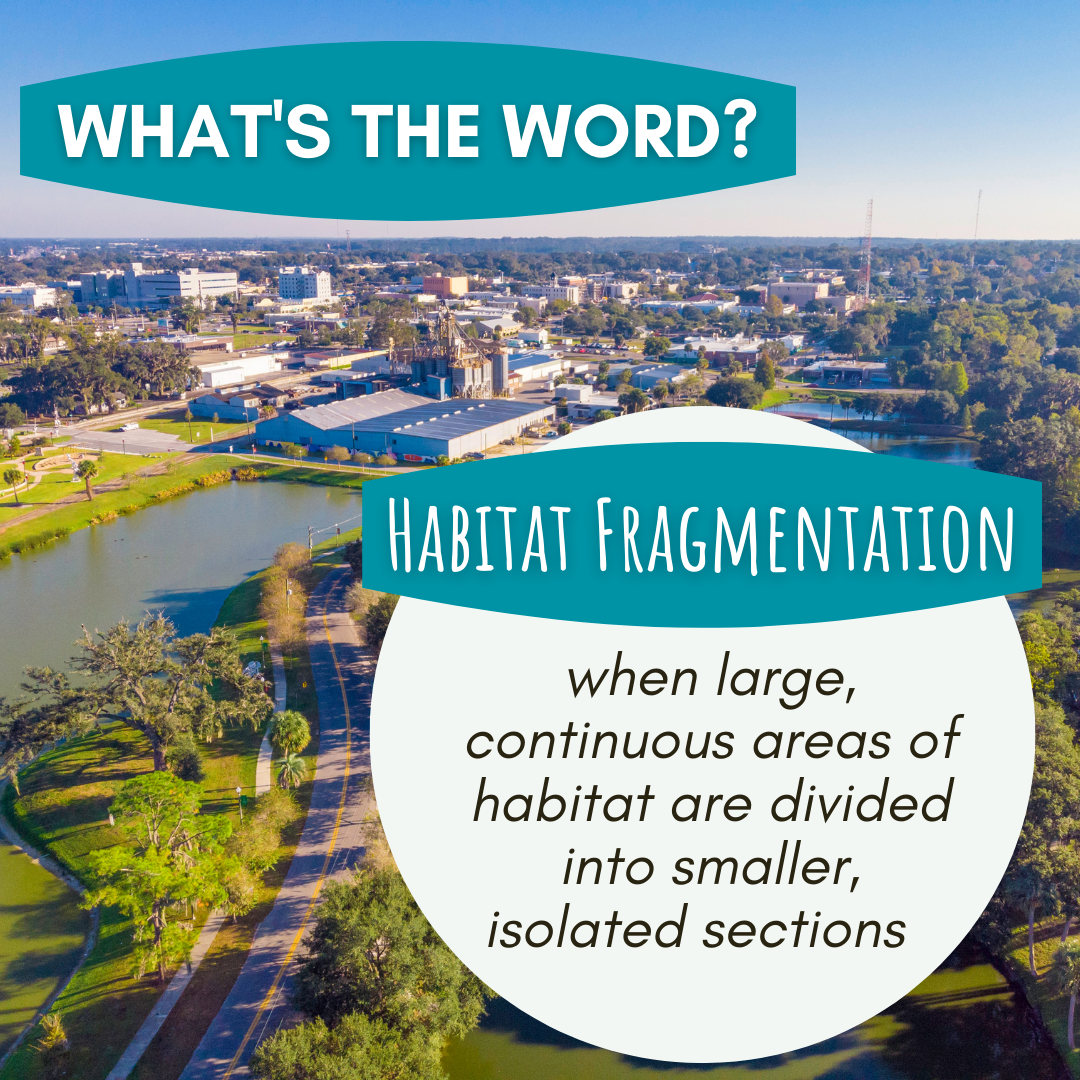 Habitat fragmentation occurs when large, continuous areas of habitat are reduced in size and divided into smaller, isolated sections. On a larger scale, fragmentation happens as land is cleared for human use and it continues to occur locally as roads and other manmade divisions further splice up the remaining land. Fragmentation can lead to local extinctions and decreased biodiversity as the isolated fragments decrease interior habitat and increase the amount exposed to edges. Only the species able move through manmade barriers and withstand the irregular environmental conditions experienced at the edges will thrive. Efforts such as the Florida Wildlife Corridor are working to battle habitat loss and fragmentation. The Florida Wildlife Corridor is a contiguous web of natural spaces throughout the state that allows species to safely move through the landscape without human interference. This ecosystem connectivity is vital for protecting Florida’s long list of threatened and endangered species. Information from UF/IFAS, USDA, and Florida Wildlife Corridor Foundation. 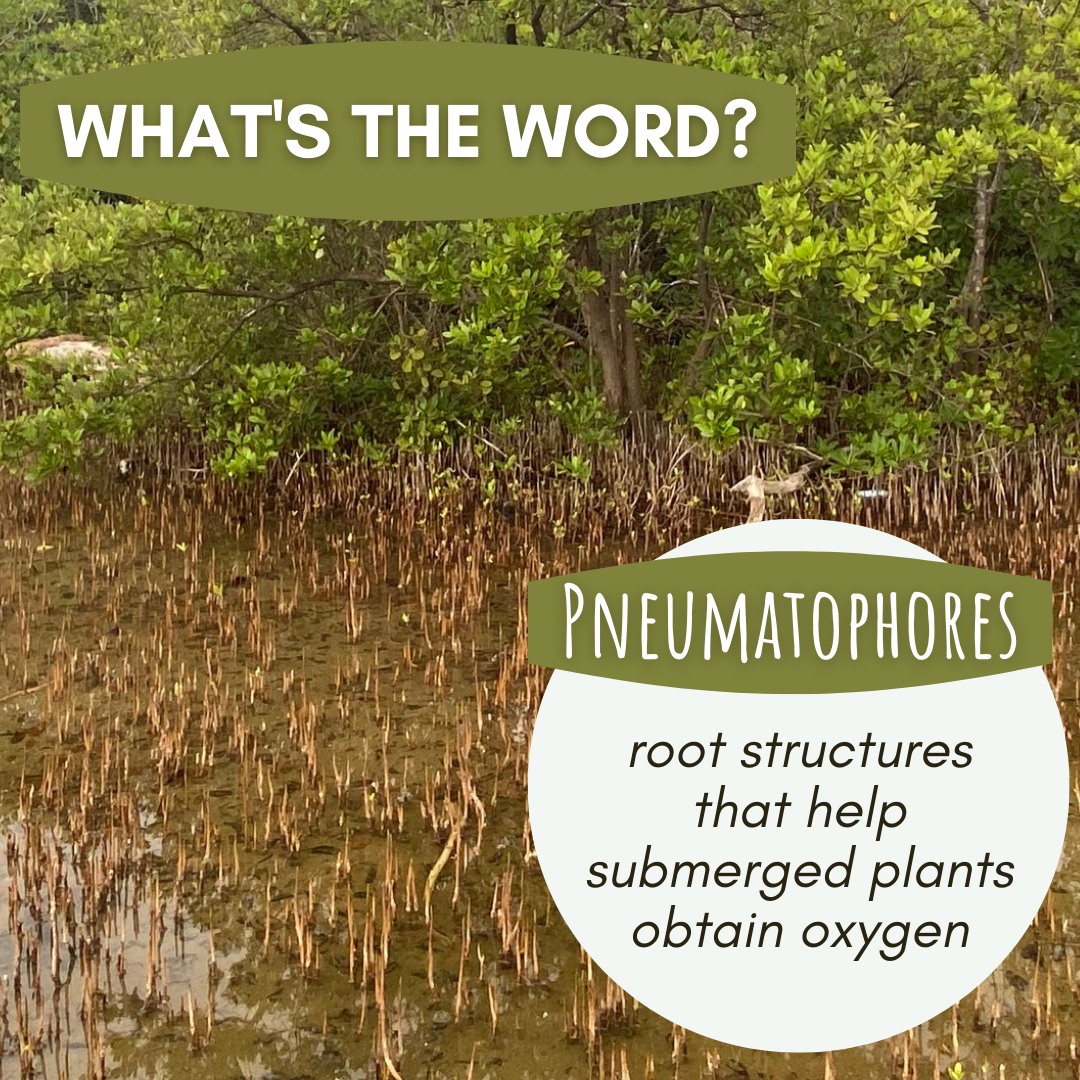 Pneumatophores are root structures that typically accompany partial or completely submerged plant species. These root structures are aerial, meaning they exist in the air as they grow vertically through the mud or sand below them. As you can imagine, breathing underwater is not an easy task, so these above-ground roots provide oxygen to the underwater root systems. A common species that has pneumatophores in Florida is the black mangrove, like the one pictured here! Pneumatophores are a very distinctive feature to help you differentiate between the state’s three mangroves: red, black, and white mangroves! Info from Florida Museum and Britannica. Image from iNaturalist user garyervin (CC BY-NC 4.0). 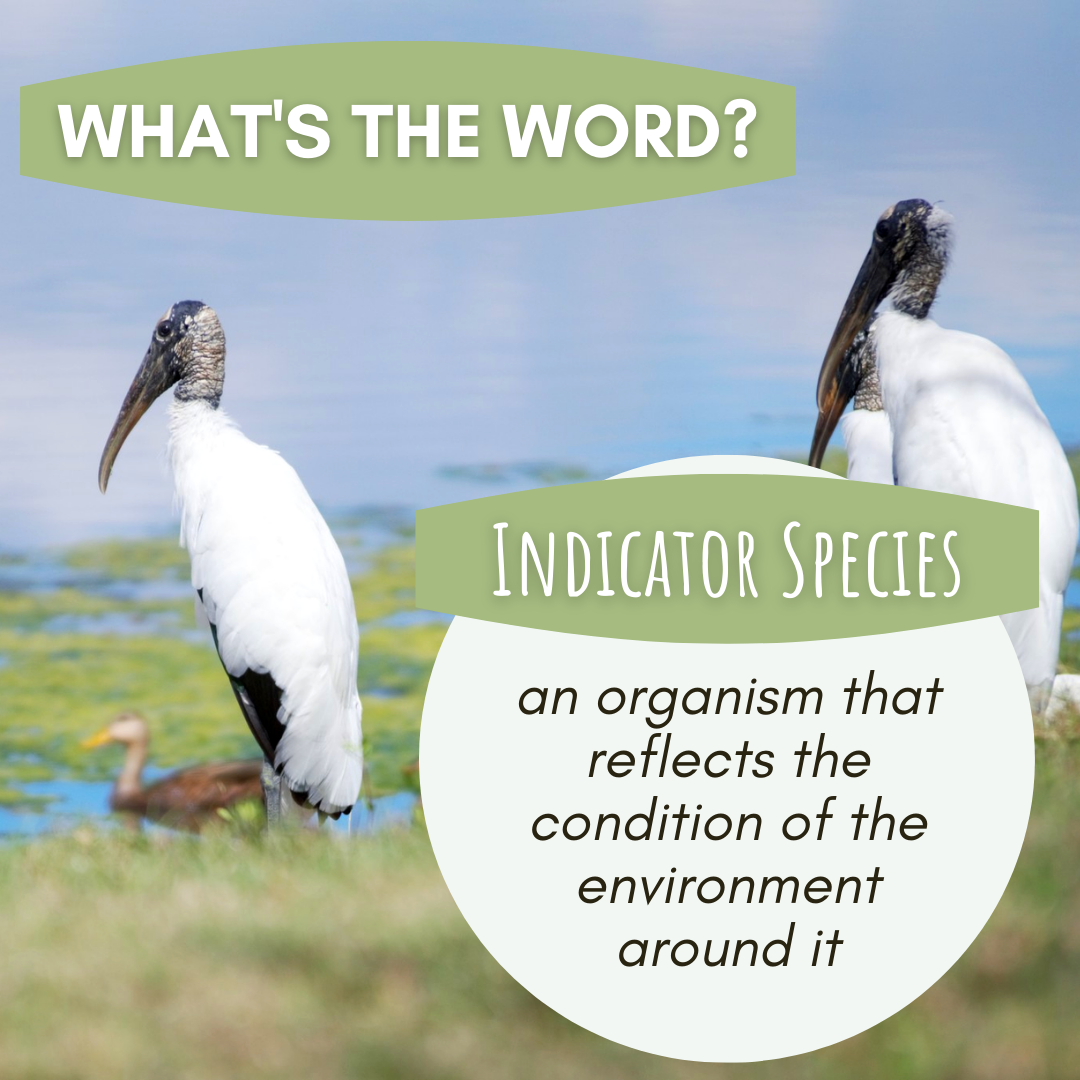 An indicator species is an organism – such as a plant, animal, or bacteria – that reflects the condition of the environment around it. Also called bioindicators, indicator species are so finely tuned to thrive in their specific habitat that they reflect even slight changes in the health of the environment. Scientists can gain critical information about the health of an ecosystem by monitoring changes in the physiology, behavior, and population of an indicator species that lives in it. When their habitat requirements are no longer met, indicator species react in a predictable way, communicating an early warning of environmental change. In Florida, the wood stork and American alligator are two important indicator species helping scientists evaluate the effectiveness of Everglades restoration. Alterations to the water cycle by human activities limit the ability of wood storks and alligators to thrive in the Everglades, due to changes in water depth, duration, and salinity. By measuring the well-being of these two species, researchers can determine if ecological health is being properly restored. Information from National Geographic, UF/IFAS, and National Park Service. Image by iNaturalist user qwertyduck (CC-BY-NC). 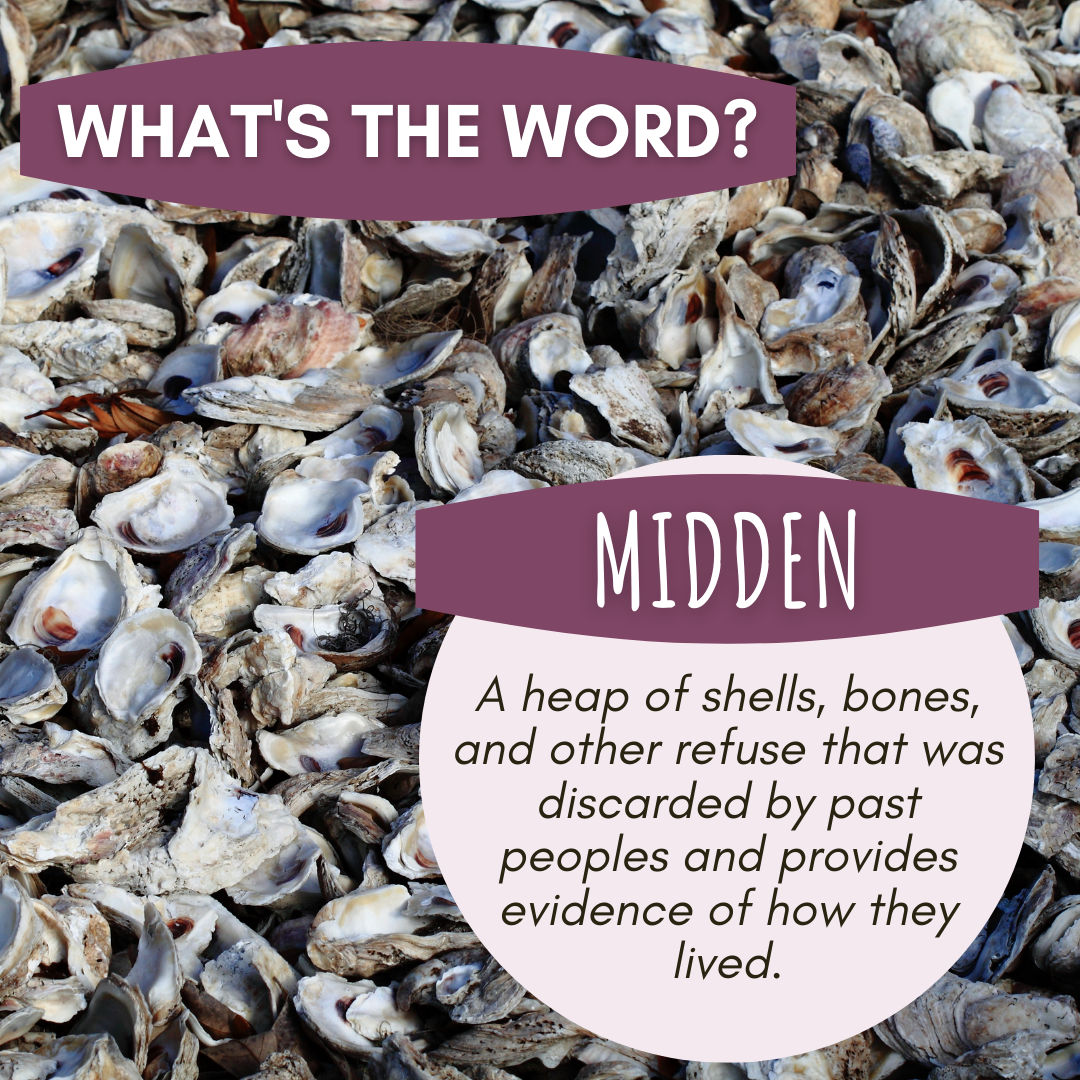 A midden is a heap of shells, bones, and other refuse that was discarded by past peoples and provides evidence of how they lived. Early Floridians loved to eat shellfish, including oysters, snails, crabs, clams, and mussels. All of the waste from these meals was put into big piles called middens, but some middens served further purposes beyond garbage disposal. Many of these piles were significant for seasonal gatherings, ritual ceremonies and community forums. Today you can see one of the largest middens, known as the Rollins Ring, at Fort George Island Cultural State Park. Info from Florida State Parks. 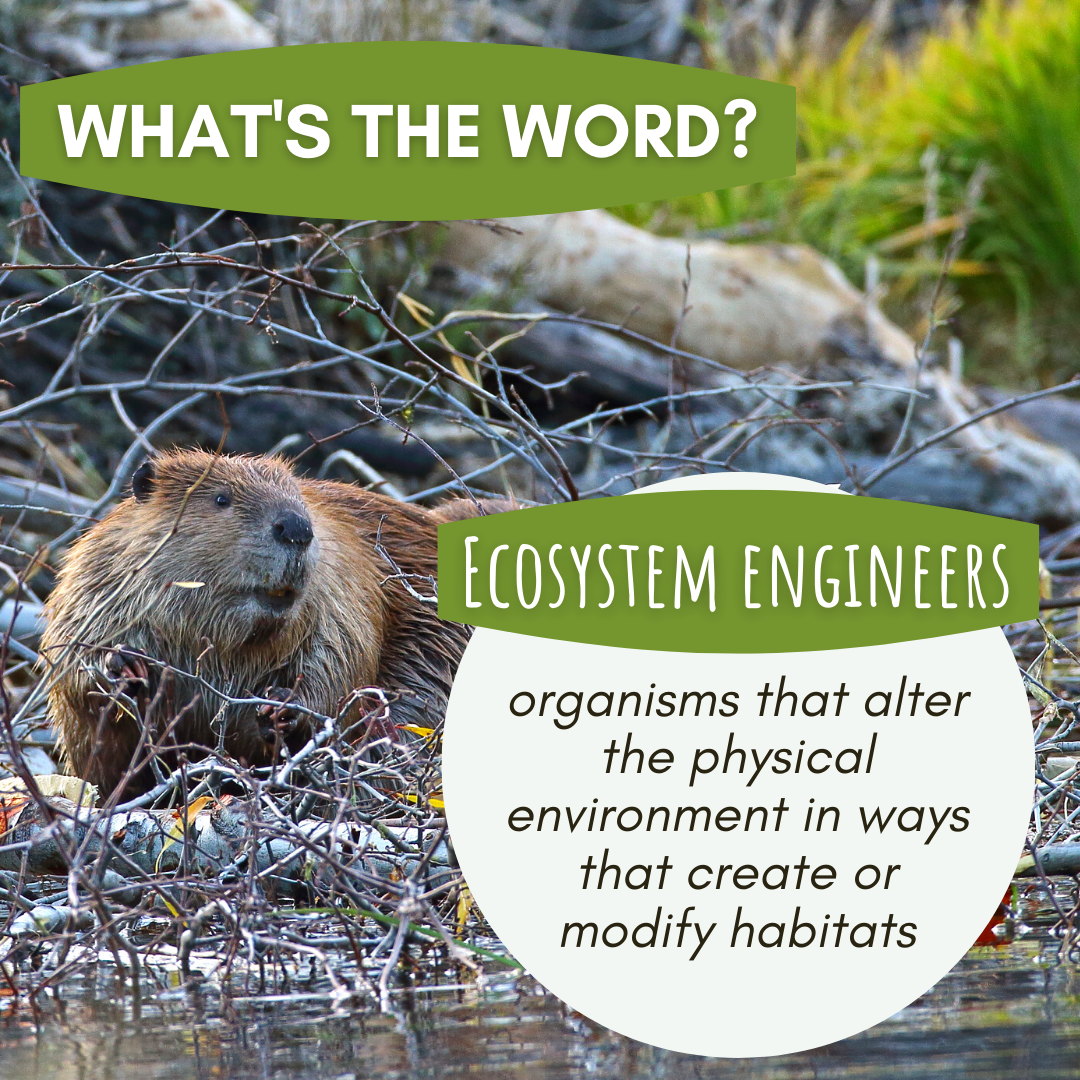 Many species, such as beavers, whales, corals, and oysters are known as ecosystem engineers for their ability to alter the environment in ways that create new habitats or modify existing ones. These organisms are crucial for maintaining ecosystem health and restoring habitat after disturbances. Researchers have even found that some ecosystem engineers can restore habitat more efficiently than humans! North America’s largest rodent – the American beaver – is one example of an exceptional ecosystem engineer. The construction of dams helps to replenish aquifers, maintain water quality, mitigate the impact of wildfires and floods, and create healthy habitat that attracts an abundance of native species. In Florida, beavers create habitat for nesting wood ducks, migratory waterfowl, otters, turtles and fish. Information from NOAA, NWF, FWC, and University of Georgia.

Earth Systems and the Economy

View all Earth to Florida posts