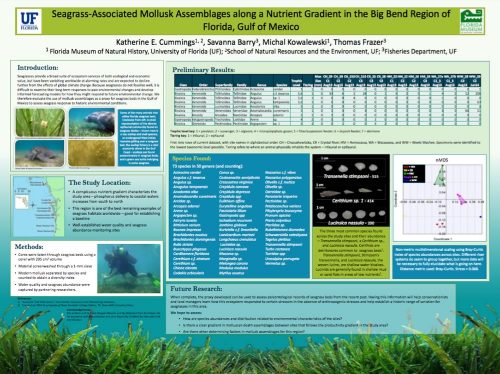 Seagrass-Associated Mollusk Assemblages along a Nutrient Gradient in the Big Bend Region of Florida, Gulf of Mexico

Seagrasses provide a broad suite of ecosystem services of both ecological and economic value, but have been vanishing worldwide at alarming rates and are expected to decline further from the effects of global climate change. Because seagrasses do not fossilize well, it is difficult to examine their long-term responses to past environmental changes and develop informed forecasting models for how they might respond to future environmental change. We therefore evaluate the use of mollusk assemblages as a proxy for seagrass beds in the Gulf of Mexico to assess seagrass response to historic environmental conditions.

Considerable attention has been devoted to the biogeography of cephalopods in recent paleontological literature (Klug et al. 2015; Lehmann et al. 2015). Those marine invertebrates are very important in Cretaceous biostratigraphy and regional geology. However, there is a notable lack of quantitative studies in accessing their biogeography. Bengtson and Kakabadzé (1999) indicated the urgent need for those quantitative studies in ammonite biogeography. A number of biogeographic provinces have been identified based on traditional paleontology (Zell et al., 2013). Classical approaches used in biogeography include ordination or agglomerative clustering of a locality-locality distance matrix. Those techniques use only second order information. In contrast, network approaches integrate geographic ranges, co-occurrence, shared species and higher order relationships (Kéfi et al. 2015; Moalic et al. 2012; Vilhena et al. 2013; Vilhena et al. 20015). The main goals of this project are (i) to generate an objective, data-derived delimitation of the Cretaceous biogeographical regions using network theory, and (ii) to test the robustness of the Cretaceous biogeographical regions identified by traditional paleontological methods. 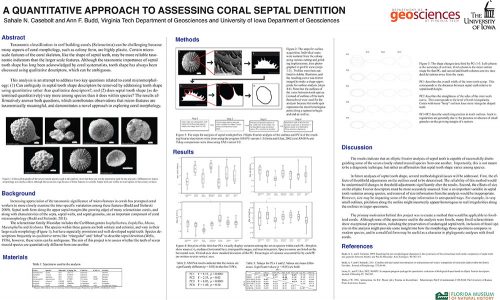 The extent to which the spatial variability of faunal assemblages is preservable in the fossil record is a question that has long interested paleoecologists. Both modern and fossilized faunal assemblages are spatially variable, but the degree to which the spatial variation in fossil assemblages reflects it’s original (life) variability in not well understood. Numerous studies have attempted to address this type of question at regional scales. In contrast, we were interested in addressing this question at very fine spatial scales (meters to tens of meters). To do this, we examined modern mollusk death assemblages in sediment from Dim Bay, Bahamas as a modern analog for a fossil assemblage.