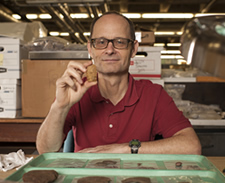 Charles Cobb is the Florida Museum of Natural History Lockwood Chair in Historical Archeology. His research includes exploring the multi-faceted, colonial-era interactions between Native American, English, French, and Spanish peoples in southeastern North America. He is currently working on contact-period sites in Mississippi, and, with Gifford Waters, is developing an online database dedicated to the archaeology of mission sites. 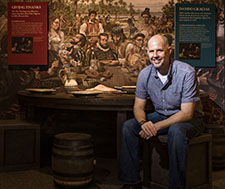 Gifford Waters is the Collections Manager for Historical Archaeology at the Florida Museum of Natural History. He received his Ph.D. in Anthropology in 2005 from the University of Florida, studying the interactions among the various Southeastern Native American groups brought together in the missions of St. Augustine in the 17th and 18th centuries. He has done fieldwork throughout the southeastern U.S. and in La Isabela.

Kathleen Deagan is a Distinguished Research Curator at the Florida Museum of Natural History, and adjunct Professor of Anthropology, History and Latin American Studies at the University of Florida. She has conducted fieldwork in St. Augustine since 1972, and in the Caribbean since 1979.

Elizabeth Reitz is a zooarchaeologist and Director of the Georgia Museum of Natural History. She has served since 1979 as the project zooarchaeologist for St. Augustine, La Isabela, and Puerto Real, and has published extensively on historic period subsistence adaptations throughout the Spanish colonial world.

Eugene Lyon is Adjunct Professor of History at the University of Florida and immediate past director of the St. Augustine Foundation at Flagler College in St. Augustine. He is the leading authority on Pedro Menéndez de Aviles and the history of early Florida colonization. He has served as a project historian for the archaeological programs at the Menéndez fort and campsite in St. Augustine, and for the excavation of sixteenth century St. Augustine in general. He has also done archival research related to the archaeological programs at Puerto Real and La Isabela.

Micheal V. Gannon is Distinguished Service Professor Emeritus in the Department of History at the University of Florida. He is a leading authority on colonial Florida history, and has been a long-time historical consultant and administrative collaborator in the archaeology programs at St. Augustine, Puerto Real, La Navidad and La Isabela.

Alan Stahl is a consulting numismatist and historian, and a leading authority in medieval Spanish and Italian numismatics. He has curated the medieval coins and medals at the American Numismatic Society, and has studied and identified the coinage from La Isabela and Concepción de la Vega.

Herschel Shepherd holds the Beinecke-Reeves Distinguished Chair in Architectural Preservation in the University of Florida’s College of Architecture, and is a leader in Florida’s Historic Preservation programs. He has worked with the archaeology program in St. Augustine in architectural restoration and reconstruction since 1970, and has also consulted on architectural stabilization and preservation at La Isabela, Concepción de la Vega and countless sites throughout Florida.