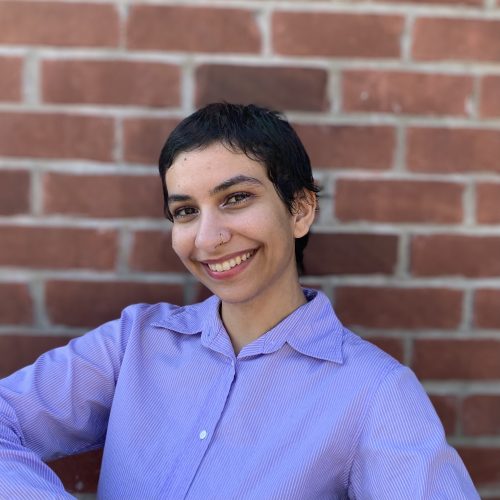 Jessie Moses is an undergraduate student at the University of Florida studying Natural Resource Conservation. Her favorite environmental topics are water resources, ecotourism, and urban ecology. After graduation, Jessie plans to gain more experience in fieldwork and continue improving her science communication skills in marine and coastal ecosystems. She hopes to use environmental sciences as avenues toward mental and emotional wellbeing in urban communities. Outside of natural resources, Jessie spends her time knitting and skating poorly.

Read a Feature Story by Jessie: 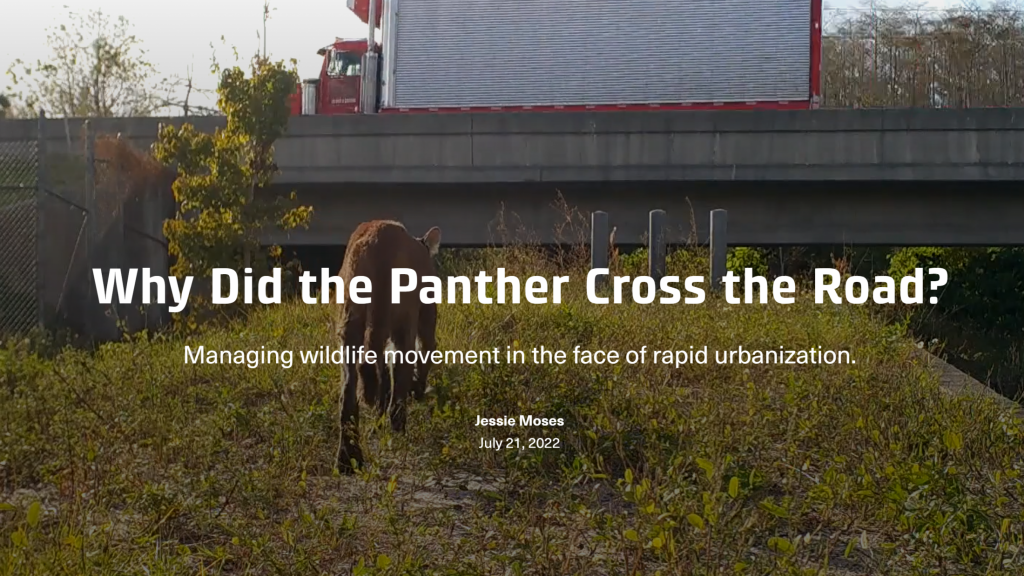 Why Did the Panther Cross the Road?

How wildlife crossings help manage wildlife movement in the face of rapid urbanization.

Jessie Moses Reflects on Being an Environmental Communicator

Creating my own content for the Institute's social media channels exposed me to a completely new side of the state.

To pair with the rest of our educational content in each Earth to Florida newsletter, we bring you monthly updates… 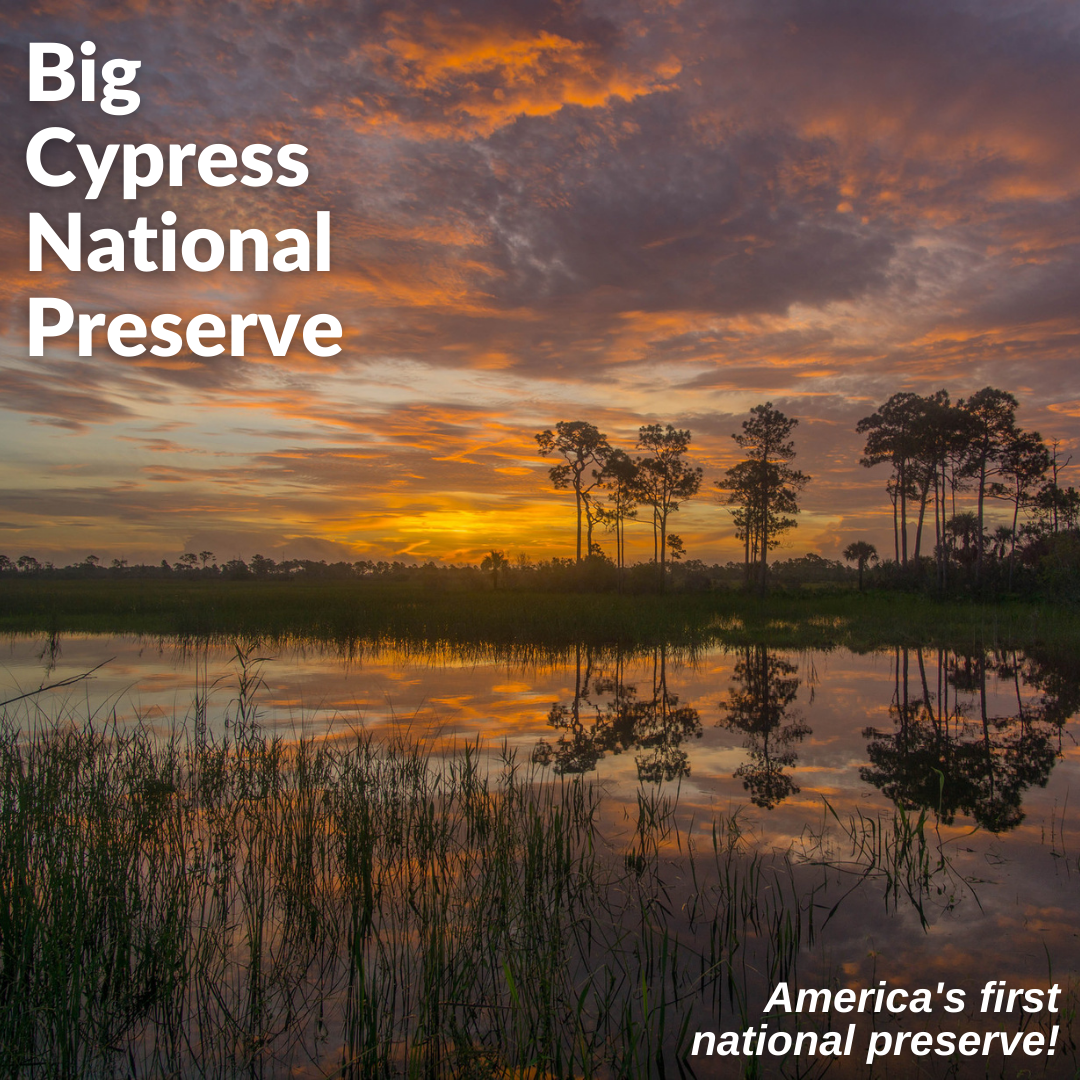 Did you know that America’s first national preserve is right here in Florida? One of the 11 National Parks in Florida is the Big Cypress National Preserve in Ochopee, South Florida! The freshwater in the Big Cypress Swamp supports the Everglades and the marine estuaries on the Southwest coast of Florida. At the preserve, you’ll find the American alligator, the endangered Florida panther, red mangroves, and many, many more animal and plant species. Hike, canoe, participate in one of the many ranger-led activities, or even stargaze as the preserve is a designated International Dark Sky Site! The area was originally inhabited by the Indigenous Calusa people, and later the Miccosukee and Seminole people as well. The Miccosukee and Seminole Tribes continue to call the preserve home and make use of its resources. Have you ever visited Big Cypress? Info from the National Park Service, image from the National Park Service. 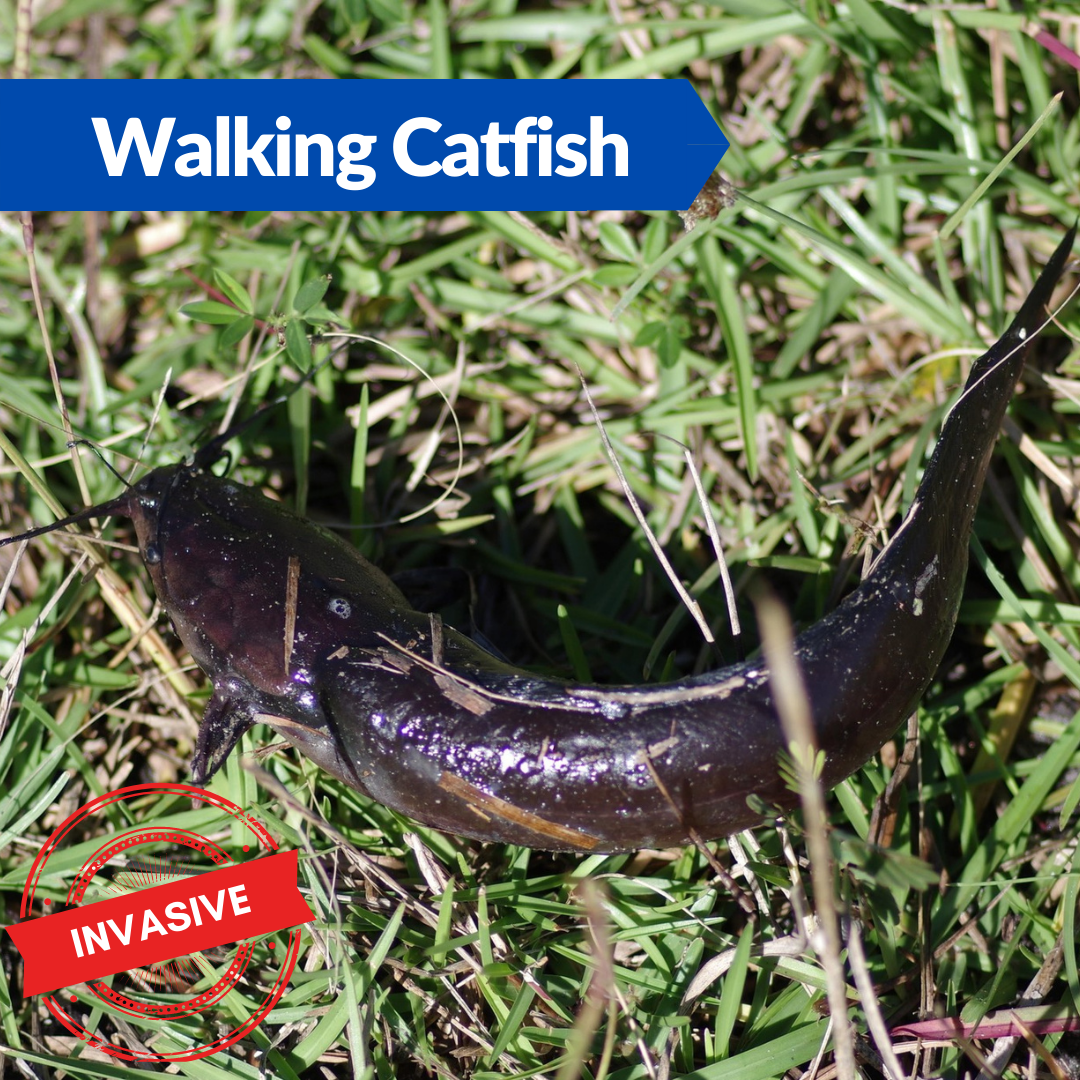 Walking catfish are an invasive species in south and central Florida regions typically found in slow-moving waters, such as ponds and canals. This freshwater fish is native to southeast Asia and was introduced to Florida in the 1960s as part of the aquaculture farming industry. Most of the damage this species has caused in Florida has been in the same aquaculture industry, invading the facilities and preying on the fish there. Like many other invasives, this fish has specific characteristics that make them more likely to be successful. 1) It can breathe air! Because of its specialized gill structure, this fish can survive out of water for a significant amount of time. 2) It can travel on land from habitat to habitat using its pectoral fins. Despite being invasive, walking catfish have several natural predators in Florida, including herons and egrets, reptiles, and mammals. As omnivores, their diet primarily consists of insects, crustaceans, fish larvae, smaller fish, and plant matter. Info from Florida Museum and National Geographic Society. Image from iNaturalist user Peter and Kim Connolly (CC BY-NC 4.0) and iNaturalist user gotcritters (CC BY-NC 4.0). 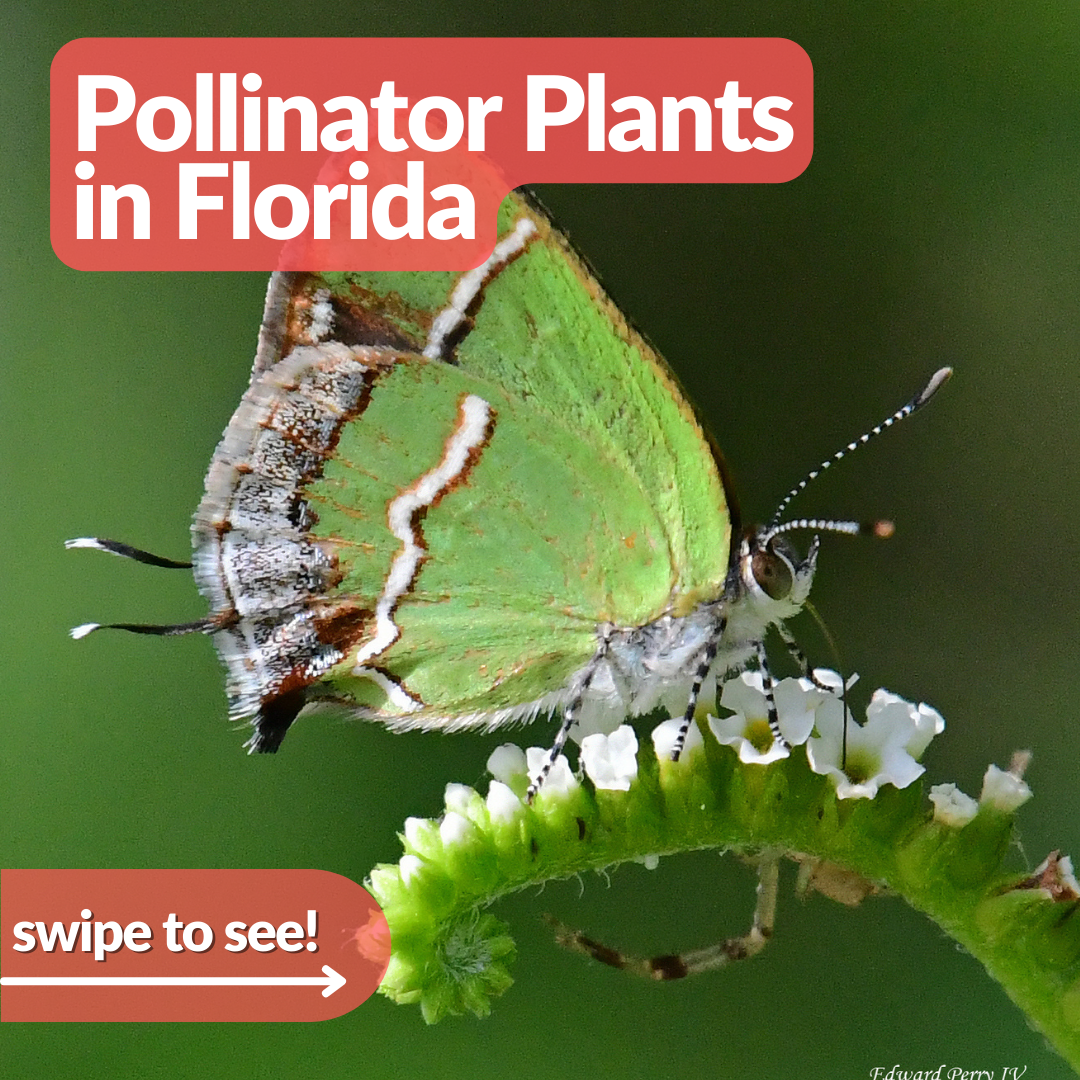 Pollinators are animals responsible for moving pollen from flower to flower or within one flower. Some pollinator species include butterflies, moths, bees, and hummingbirds. These critters are critical in countless ways and support humans, other animal species, the environment, and our economy. By fertilizing plants, pollinators are necessary for the production and growth of fruits, vegetables, and much more for human and animal consumption. Pollinators, especially bees, also support the economy tremendously by aiding crop production. Florida’s top pollinators are insects and birds. There are over 300 species of native wild bees in Florida! These bees generally do best with native species, and they are especially attracted to white, yellow, or blue-purple flowers. However, other pollinators may be attracted to orange, pink, or red flowers. Unfortunately, pollinator species have been declining in Florida and throughout the United States due to habitat loss, pesticide use, disease, and climate change. Planting pollinator-friendly plants native to Florida is a great way to attract pollinators and provide shelter, nectar, and pollen. For more detailed descriptions of each of these species and other pollinator-friendly plants, use the link in our bio! Flowers: 1. Coral honeysuckle (Lonicera sempervirens) 2. Gaillardia (Gaillardia pulchella) 3. Black-eyed Susan (Rudbeckia hirta) 4. Passionflower (Passiflora incarnata) Shrubs and trees: 1. Sea grape (Coccoloba uvifera) 2. Walter’s viburnum (Viburnum obovatum) 3. Buttonbush (Cephalanthus occidentalis) 4. Saw palmetto (Serenoa repens) Image of Silver-banded hairstreak from iNaturalist user Edward Perry IV (CC BY-NC 4.0). Info from UF/IFAS Gardening Solutions, UF/IFAS Extension, and National Park Service. 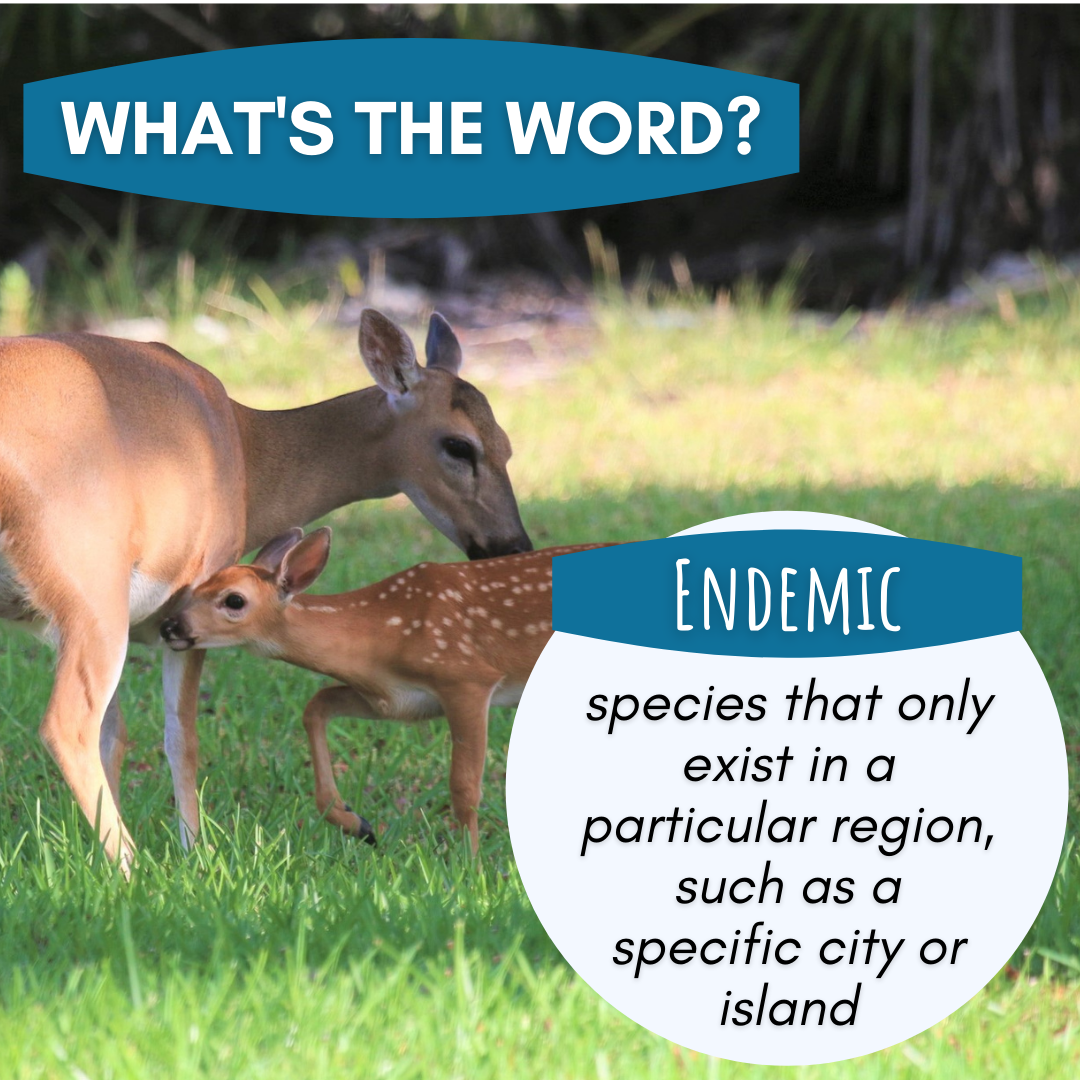 Endemic species are those plants and animals that only live and exist in one specific region, such as a city, state, or country. For example, the Key Deer pictured here is endemic to the Florida Keys, which means it is only found there and nowhere else in the world. Endemic species often have special adaptations to their particular location. These plants and animals are critical parts of their ecosystems and important to biodiversity. Florida is one of the top five states with the most endemic species — more than 250 animal species can only be found in the Sunshine state! Unfortunately, partly because of their already low numbers, endemic species are at an increased risk of extinction. The Key Deer and many others are endangered due to human-caused activities, such as habitat loss from urban development. Swipe to see other species endemic to Florida! 1) Florida scrub-jay (central Florida) 2) Florida milkweed (south-central Florida) 3) Florida false sunflower (north-central Florida) 4) Florida bonneted bat (south Florida). Info from the National Park Service, National Geographic, Florida State Parks, United States Department of Agriculture, Florida Fish and Wildlife Conservation Commission, Atlas of Florida Plants, and US Fish and Wildlife Service. 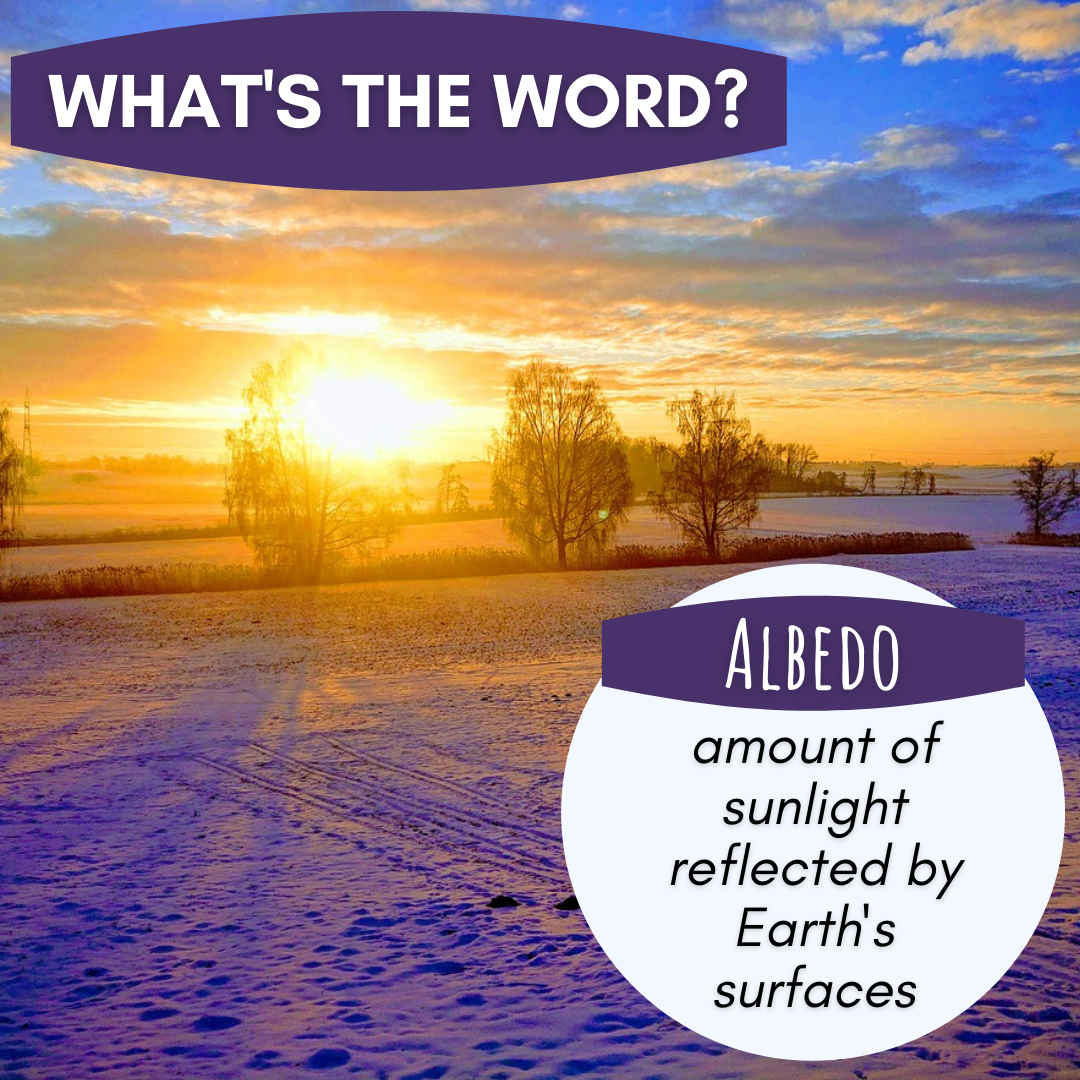 Albedo is the amount of sunlight reflected by Earth’s surfaces. If sunlight is not reflected, it is absorbed by a surface or object, which is then warmed up. This means albedo is important in understanding how to keep certain areas cooler or warmer. Scientists typically measure albedo by giving common surfaces and materials on Earth a value between 0 (surface absorbs all incoming light) and 1 (surface reflects all incoming light). Snow, ice, and sand have high albedo at about 0.6 – 0.9, meaning about 60% – 90% of the incoming sunlight they receive is reflected and these areas are kept cool, having an overall cooling effect on Earth’s temperature. Forests and water have low albedo meaning most of the incoming sunlight is absorbed, and these areas are kept warm, having an overall warming effect on Earth’s temperatures. Maintaining global temperatures is a balance between surfaces with a high albedo and a low albedo. Because of this impact, albedo also plays a critical role in climate change. One of the main effects of climate change is increasing temperatures. As this effect continues to melt snow and ice, it exposes surfaces that are more able to absorb light rather than reflect it, and sunlight warms the area up. As more snow melts because of the warming, the cycle continues in a positive feedback loop called the “albedo effect” that increases climate change impacts due to increasing global temperatures. 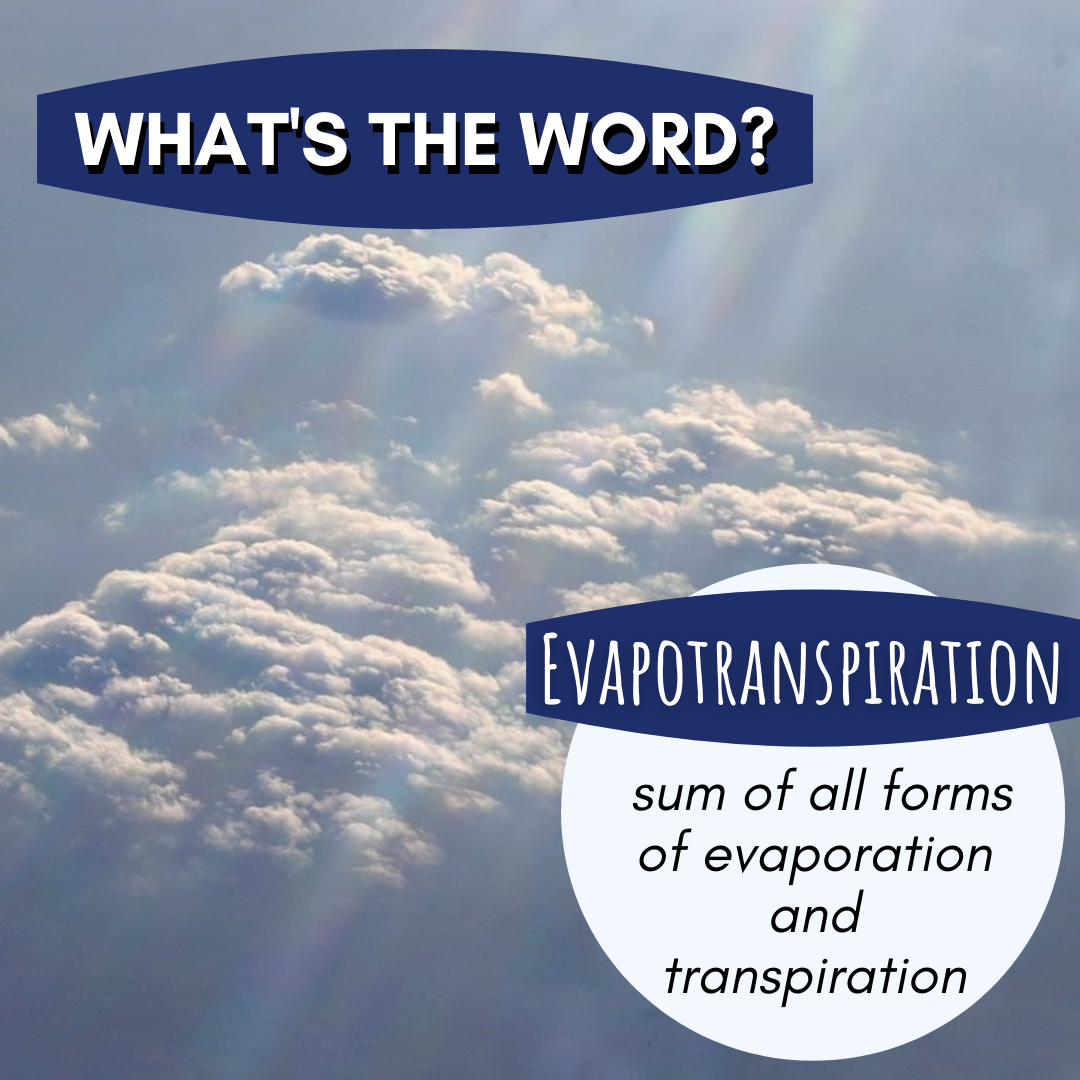 Evapotranspiration is a critical part of the water cycle. It is the sum of water that enters the atmosphere during evaporation and transpiration. During both processes, water changes from a liquid to a gas. Evaporation refers to the water coming from land surfaces and water bodies, while transpiration refers to the water from plants. Transpiration occurs when plants use their roots to absorb water from the soil and release excess amounts through their parts, especially their leaves. Many factors affect evapotranspiration rates, including temperature, humidity, wind, and moisture. Because of these relationships, evapotranspiration is necessary to determine and interpret climate change impacts. A central aspect of climate change is global warming. In Florida, these increasing temperatures cause increasing evaporation rates, leading to more intense rainstorms. However, in other areas, this very same factor leads to droughts. As increased evapotranspiration rates dry out soils, rainwater runs off the hard ground, enters nearby water bodies, and the soil stays dry. Info from U.S. Geological Survey and UCAR Center for Science Education. Images from Wikimedia users Wing-Chi Poon (CC BY-SA 3.0) and M. W. Toews (CC BY 4.0). 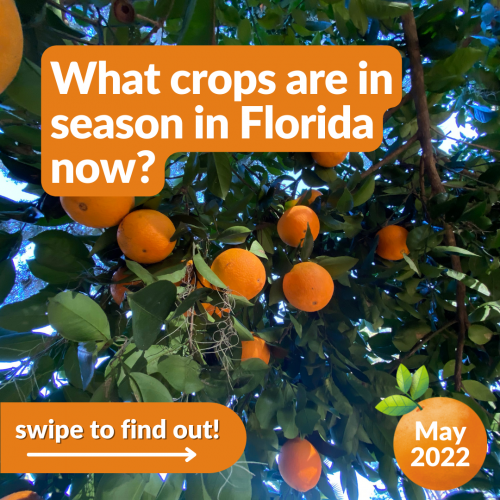 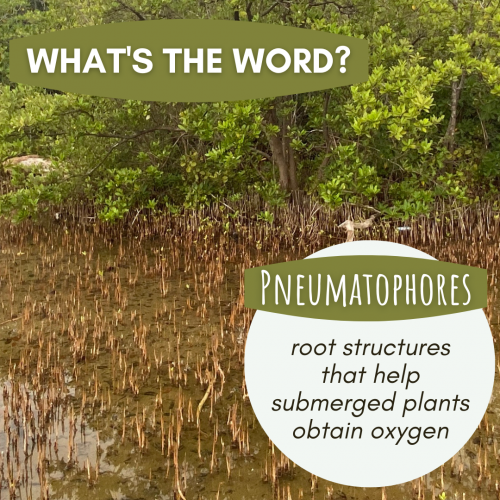 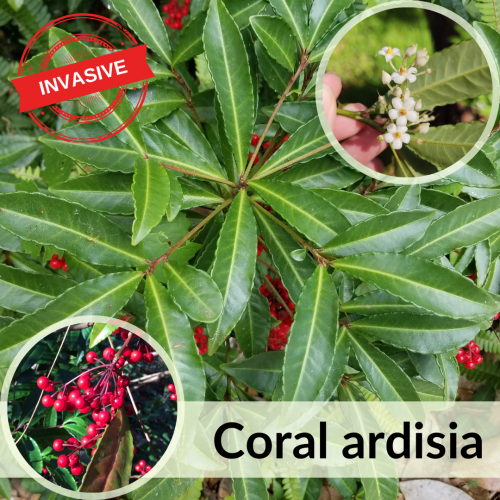 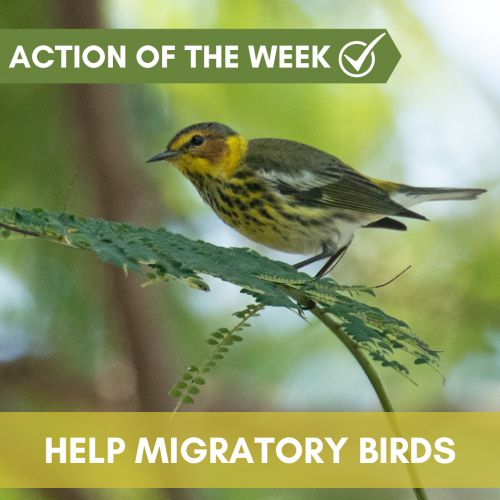 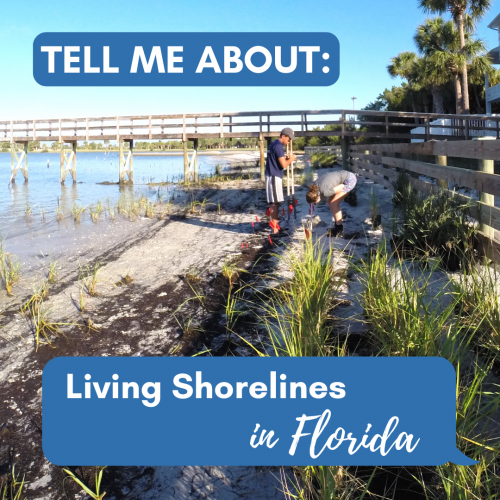 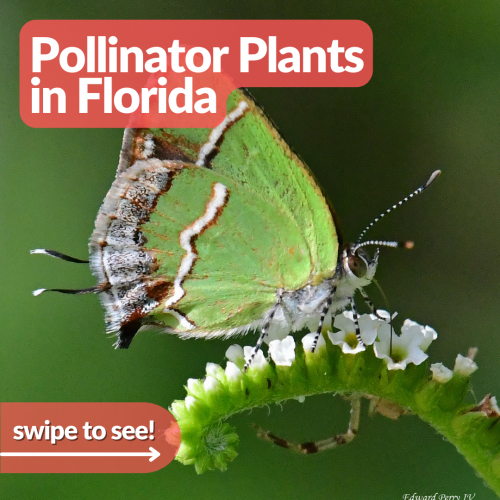