Tell Me About: Everglades Restoration

Once an expansive and flourishing ecosystem, the Florida Everglades have been a topic of discussion among environmentalists for decades. In its natural state, the Everglades spanned across a third of Florida, with water flowing from the Kissimmee River near Orlando, down through Lake Okeechobee, to the Florida Keys. When development began in the late 1800s, these massive wetlands started being channelized and drained to create livable urban and agricultural lands for the increasing population. By the 1920s, people flocked to South Florida’s new booming cities, prompting further alteration of the Everglades.

In 1948, Congress authorized the Central and Southern Florida Flood Control Project to be carried out by the U.S. Army Corps of Engineers. Through the construction of over a thousand miles of canals, levees, and other water-control structures, this project supported Central and South Florida’s booming population by providing water supply and flood protection to the developing cities. By 1963, the construction was completed, draining half of the Everglades, channelizing the Kissimmee River, and diverting water from Lake Okeechobee east and west to create the Everglades Agricultural Area and more coastal cities. Without sufficient water flowing south, the Everglades began to suffer.

Soon after its construction, the effects of this mass disruption of the wetlands would be brought to light. Following the proposal for an international airport to be built in the Everglades, environmentalists – including Marjorie Harris Carr – rallied and sparked efforts to “Save the Everglades.” Although this airport was never constructed, the efforts to protect the Everglades continued.

Decades of environmental legislation began in the 1970s, first with the establishment of the Environmental Protection Agency and shortly followed by the Clean Water Act. Throughout the following years, an abundance of legislation was passed to clean up and restore the wetland’s natural hydrological conditions. In 2000, The Comprehensive Everglades Restoration Plan was authorized, making it the largest hydrologic restoration project ever undertaken in the United States. Since then, restoration efforts have continued through federal, state, local, and tribal initiatives. Most recently, the largest ever investment of federal funds for Everglades restoration, nearly $1.1 billion, was provided to the U.S. Army Corps of Engineers’ South Florida Ecosystem Restoration Program to support ongoing projects. 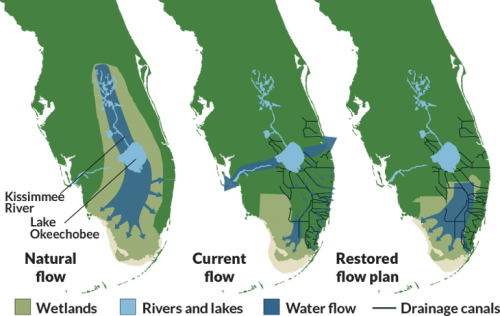 Only 50% of the historic Everglades remain today and over 70% of its water flow has been lost. The disruption of the Everglades’ natural hydrology by flood control projects, urban development, and agricultural use has cut off the supply of fresh water to the remaining wetlands causing impacts to water quality, quantity, timing, and distribution. The lack of water and increased development has also led to detrimental habitat loss and degradation and an increase in invasive species.

According to the The South Florida Ecosystem Restoration Task Force, there are three main goals for Everglades restoration:

By working towards these goals, the natural hydrologic conditions and native biodiversity of the Everglades will slowly be able to recover. The third restoration goal emphasizes the need for coexistence between Florida’s population and the Everglades. Since the Everglades provide drinking water for more than 9 million people, fostering a lasting sustainable relationship between the wetlands and the people that rely on it is an essential part of restoration.

What you can do.

Stay up to date on restoration efforts and consider volunteering or donating to local organizations:

Friends of the Everglades

Reach out to your local representatives:

Let your voice be heard – advocate for beneficial policies and funding for the Everglades.