“OctoGirl” Shares Her Research and Passion for Octopus Biology

This Fall, Scientist in Every Florida School teamed up with the ANGARI Foundation for a second season of the live stream series Ocean Expert Exchange. Created with K-12 students in mind but open to learners of all ages, the series introduces students to a variety of marine science topics through presentations and Q&A sessions with experts in the field. During October’s popular event Octopus Fieldwork: Behavior to Bacteria, viewers learned about octopuses, careers in marine science, and the creativity and technology involved in research studies. 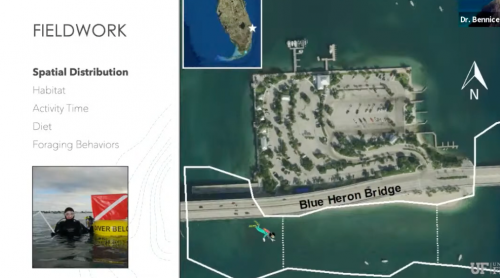 Dr. Chelsea Bennice has a varied career history in marine biology, but her true passion is researching her favorite cephalopod — the octopus. Her 1,000 hours spent underwater studying Florida octopuses has even earned her the nickname “OctoGirl,” a moniker she uses to share her underwater photography and videography featuring octopuses on social media.

Currently based in Riviera Beach, Florida, Dr. Bennice has spent recent years studying the large octopus population that congregates around Blue Heron Bridge at Phil Foster Park. As is the case for many scientists, her research began with a question — how were two octopus species, the common octopus and the longarm octopus, able to coexist without competing for resources?

Students learned about the processes and technologies that were used to collect the data that would inform the study’s conclusion. 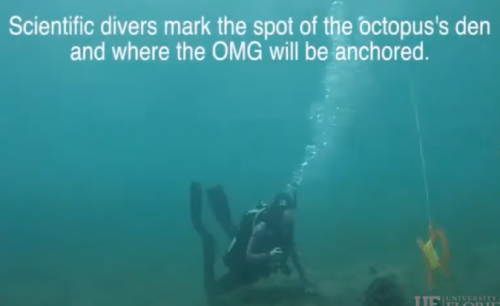 To understand the octopuses schedules and habits, 24-hour monitoring was required. To do this while still being able to get some sleep, Dr. Bennice created an Octopus Monitoring Gadget (OMG) out of a GoPro camera with an external battery that enables it to stay on for 24 hours. A red light on the camera helped pick up nighttime footage.

When it came to their foraging habits, Dr. Bennice observed the common octopuses with relative ease, as they stayed near their den. Researching the longarm octopus was more tricky as they search for their prey over a wider area. She sometimes had to follow them on foraging events that were up to three hours long!

Once the data was compiled, it became clear that these two octopus species were able to coexist 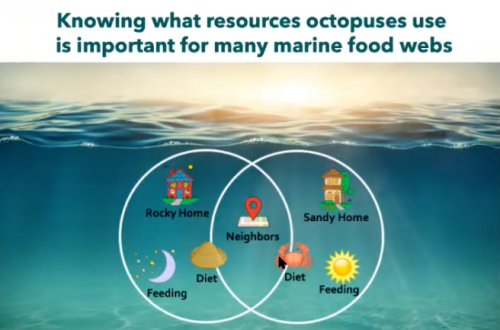 peacefully due to a variety of opposing habits. Though they are neighbors, sometimes living only a few feet away from each other, they have very different preferences. The common octopus prefers a rocky habitat, a diet of bivalves like clams and scallops, and forages at night. The longarm octopus on the other hand prefers a sandy habitat, a diet of crustaceans, and forages during the day. Because of this, they don’t compete for resources, and also don’t come into contact with each other as frequently despite their proximity. 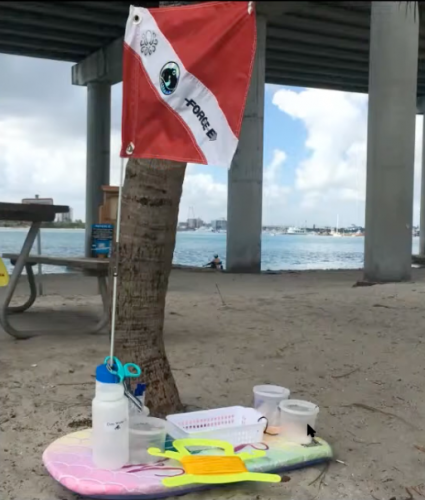 Though she had concluded the initial study, Dr. Bennice emphasized to the students that science is all about questions, and sometimes answering one question can lead to a slew of new ones.

She has gone on to study octopus arm flexibility and the octopus skin microbiome. Like when she needed to find a way to monitor the octopuses for 24 hours, Dr. Bennice had to get creative once again to study the skin microbiome. She first tried a method to swab their skin underwater, however she was unable to retain enough of the skin’s mucus on the swab. She then created a floating lab out of a boogie board with a hole cut in the center fitted with an octopus holding bin and outfitted with takeout containers to hold her samples.

Dr. Bennice also walked students through the path that brought her to where she is today. She was first introduced to marine biology as a high school student (the same age as many of those watching) and was inspired to pursue a bachelor’s degree in freshwater biology. Following graduation, she completed a variety of marine science internships. As an intern at the Marine Biological Laboratory (MBL), she was a science instructor and then did research on cuttlefish. After her internship, she stayed at MBL to study squids as a research assistant. The experience with MBL solidified her interest in animal behavior research and she completed her master’s degree in the subject before she completed a Ph.D. in octopus behavior. 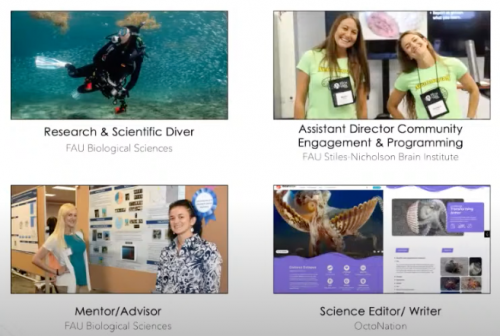 For students interested in both the sciences and the humanities, Dr. Bennice’s career is an ideal example of how these skills don’t need to remain in separate spheres. Throughout her education and career journey, Dr. Bennice discovered that in addition to her passion for cephalopod research, she was interested in teaching and science communication.

Currently, she is a research and scientific diver for the Florida Atlantic University (FAU) Biological Sciences department and serves as a mentor for students in the program. As Assistant Director of Community Engagement & Programming at the FAU Stiles-Nicholson Brain Institute, she creates STEM curriculum for middle and high school-age students. Even with all of these other responsibilities, Dr. Bennice couldn’t stay away from the octopus. She shares her knowledge of octopuses and marine conservation with a broader audience as the Science Editor and Writer for OctoNation, an education nonprofit that inspires the wonder of the ocean by educating the world about octopuses. Research, teaching, writing, and creative thinking are all integral parts of her career. 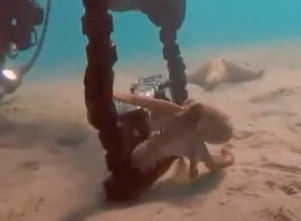 At the end of the presentation, students jumped at the chance to ask Dr. Bennice all kinds of questions. One student wondered, “do they have personalities?” Though she didn’t spot specific personality traits in each octopus she studied, she did notice that some octopuses were shyer than others. Some of them were curious about her and the monitoring equipment and would reach out their tentacles to explore. Others held back. They also learned that their suckers can taste and that they will sometimes use them for an “octopus handshake” to figure out if another octopus is of the same species. 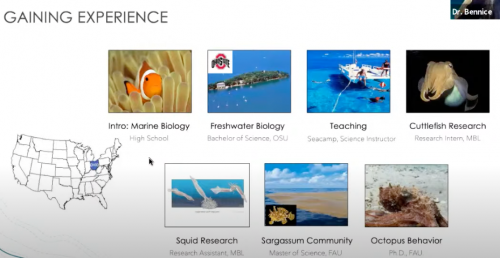 Dr. Bennice ended her presentation with some words of advice for students considering a career in the marine sciences.

“One thing that is really important is getting that experience,” she said. “I really encourage if you can get experience at a zoo, aquarium, local fish store or an internship at a science center, go for it. It teaches if you like teaching or research, or maybe if you like something else.”

Watch the video of Octopus Fieldwork: Behavior to Bacteria and other virtual events on our YouTube Channel: https://www.youtube.com/channel/UC9AMEOr1Qksuszd2dLoPCDg

Keep up with all of Scientist in Every Florida School‘s livestreamed events by checking out the event calendar here: https://www.floridamuseum.ufl.edu/earth-systems/events/2021-11/

To request a classroom or county-wide visit with a scientist, visit: bit.ly/RequestScientist

For more information about the “Scientist in Every Florida School” visit: https://www.floridamuseum.ufl.edu/earth-systems/scientist-in-every-florida-school/