Florida’s Algae Problem: What Is It, And How Can It Affect You? 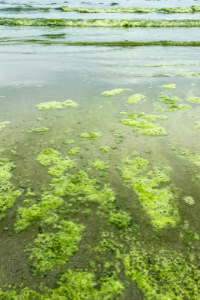 When given enough sunlight and nutrients, algae can blossom from a naturally occurring organism into a malignant and damaging mass. Floridians are already witnessing its harmful consequences in aquatic ecosystems as Florida creeps into its summer season.

Although the official start of summer is just around the corner, the heat and rain have arrived. This warm and wet season, paired with an influx of nutrients like nitrogen and phosphorus, creates the proper conditions for some types of algae to quickly multiply into harmful algal blooms, also known as HABs. Various types of algal blooms have begun to sprout in Florida waters across the state. 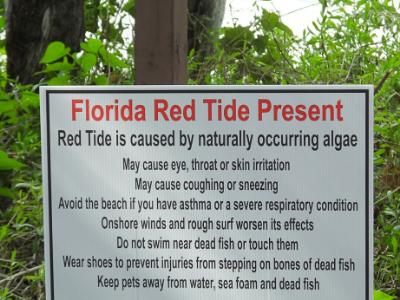 The first sign of red tide in Tampa Bay was spotted in late April of this year – a discovery that amplified concerns over the area’s water quality after the recent Piney Point wastewater leak. As a result, many scientists are doubling down on studying what sustains these blooms once they occur. For example, researchers at the University of Florida are launching a two-year project to determine specific nutrient pollution sources for algal blooms in the bay.

Unlike red tides, blue-green (or cyanobacteria) blooms are most common in freshwater systems around the state: In the last week alone, 14 sites with bloom conditions were reported to the Florida Department of Environmental Protection. Over the past month, Lee County officials issued health alerts for blue-green algal blooms six times, warning the public to stay away. The Florida Department of Health in Marion County issued an alert for a bloom in Lake Weir.

And Lake Okeechobee, the largest freshwater lake in the state, had two-thirds of its surface (or 500 square miles) covered in streaky, bright-green colored algae last month as temperatures rose. Although it has receded slightly, this blue-green algal could spread to nearby waterways as water is released from the lake into connected rivers. This raises alarms for the impending hurricane season that’s projected to be very active. Increased precipitation would force freshwater releases from Lake Okeechobee in order to keep its water level down – which could mean spreading an active bloom to coastal areas. 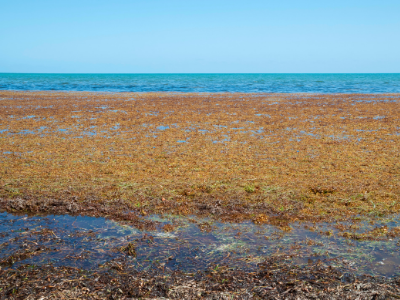 While red tide and blue-green algae are some of the most commonly recognized algal blooms, researchers have identified another aquatic organism that’s growth has quickly turned harmful: Sargassum, a brown floating seaweed. While it is an important nursery habitat for other organisms in normal amounts, massive quantities of Sargassum have been washing up onto beaches in recent years. Unlike other HABs, Sargassum is not toxic, but the researchers found that these thick mats can become “dead zones” for coastal and beach ecosystems, especially when they pile on the beach and start to decay. These Sargassum blooms have been called the “Great Atlantic Sargassum Belt.”  It has recurred annually since 2011 and extends up to 5,500 miles from the west coast of Africa to the Gulf of Mexico. Under the right conditions, this organism ends up littering Florida beaches in droves.

Florida residents are attempting to mitigate these blooms across the state in order to stem their damage, especially as several areas project a “summer of slime.” In Sarasota County, public officials are urging residents to reduce their own contributions to nutrient pollution by using environmentally friendly or alternative landscaping and lawn fertilizer during the rainy summer months. Governor DeSantis is exploring the use of “algaecide” – a powder that kills cyanobacteria – for combatting large blooms in the state. 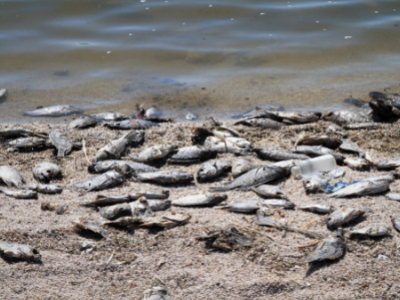 Some harmful algal blooms release toxins that can hurt wildlife, people and even entire ecosystems. For example, red tides release brevetoxins that can be fatal for marine creatures; they also cause respiratory issues (known as the “red tide tickle”) for humans. Similarly, 20 types of blue-green algae can release cyanotoxins into the air when a bloom is disturbed or starts to die-off. These harmful toxins could kill any wildlife or pets that consume the contaminated water, and humans could suffer adverse effects if exposed through recreational activities or via drinking water. As such, the Florida Department of Health recommends the public avoid any type of algal bloom when possible.

Aside from their toxicity, algal blooms can also cause harm due to the sheer space and resources they steal in Florida ecosystems. As they grow, they can block underwater plants from sunlight, leading to seagrass die-offs. This can also cause large fish kills. That decomposition, in turn, requires even more oxygen to be sucked from the habitat, especially when the algae itself dies. This oxygen depletion creates “dead zones” that put the afflicted ecosystems in danger. 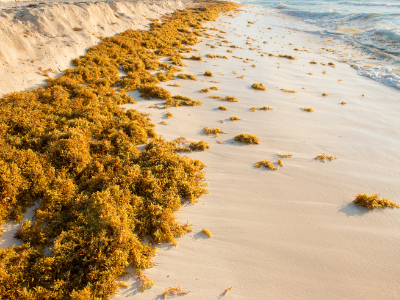 Algal blooms aren’t just physically damaging – they also negatively impact Florida’s tourism-driven economy and water-related industries. In the last decade, red tides have been responsible for hundreds of millions of dollars in clean-up efforts, loss of tourist revenue for local businesses and hits to the fishing industry. Even during last month’s brief red tide in Tampa Bay,  aquaculture harvesting was temporarily halted. And when this algae washes up on Florida shores, as seen with the state’s growing Sargassum numbers, the resulting unsightly and smelly decomposition can keep tourists off the sand and out of their checkbooks, pinching the pockets of the surrounding businesses.