Sargassum is a type of seaweed, or brown algae, that spends its life on the ocean’s surface and floats in large masses.

Unlike red tide and blue-green algae, sargassum isn’t harmful. In fact, it’s an important fish habitat that provides food and refuge for fish, birds, crabs, shrimp and many other marine organisms. It is classified as an Essential Fish Habitat by the National Oceanic and Atmospheric Administration, meaning it has special protections under the federal government.

After sargassum loses its buoyancy, it sinks and provides energy in the form of carbon to organisms in the deep sea. Washed-up sargassum also helps sustain shorelines in the Florida Keys, as the algae helps with erosion and provides beach plants with nutrients.

But, too much sargassum can be a bad thing. Large blooms can block sunlight and kill the seagrass growing below. When the sargassum dies and decomposes, the decaying organic matter removes the oxygen from the water, which can cause fish kills. It doesn’t smell very good from land, either. 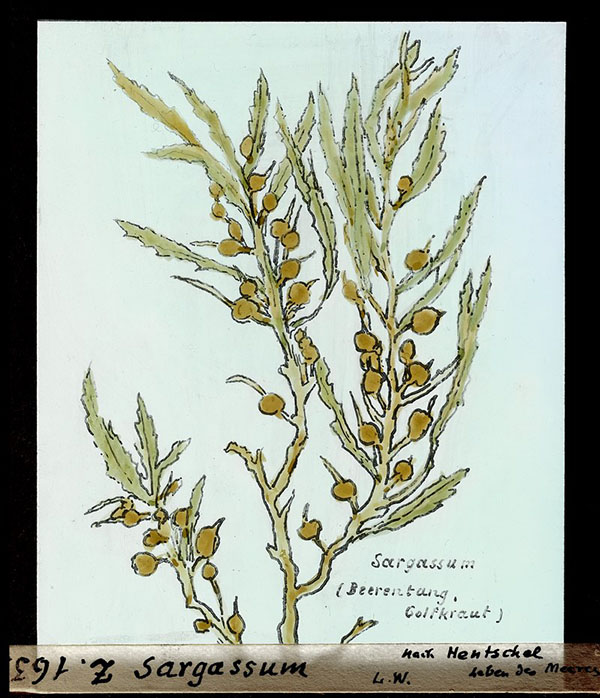 Sargassum consists of many leafy appendages, branches and gas-filled pneumatocysts that are mostly filled with oxygen and help the seaweed float.

A lot of Florida’s sargassum originates in massive accumulations in an area of the North Atlantic Ocean called the Sargasso Sea, an water body between the United States and West Africa, bordered on the western side by the Gulf Stream.

Fisherman know these floating algae mats as “weed lines” that are considered fantastic spots to sportfish.

Scientists hypothesize there may be more sargassum due to increased nutrient runoff from the Amazon River. Algae, like land-based plants, need the same things to grow: sunlight and nutrients. Fertilizer’s main ingredients are phosphorus and nitrogen, the same nutrients that fuel sargassum growth.

In the Florida Keys, prevailing winds from the south and southeast in the summer routinely bring these massive floating mats of sargassum onto shore and into canals with the wind and waves. Dense amounts of sargassum require a large amount of oxygen. At night, when there is no photosynthesis, it uses oxygen from the water, which is worse in canals that already experience a high biological oxygen demand.

Where else does it occur?

Numerous species of sargassum are distributed throughout the temperate and tropical regions of the world.

When was the last bloom? How long did it last?

Sargassum is a natural part of the ocean’s ecosystem, yet this year scientists from the University of South Florida discovered the largest bloom of sargassum on record, and they say increased nutrient inputs are to blame. Just like red tide and blue-green algae, sargassum is fueled by nitrogen and phosphorus.

“The evidence for nutrient enrichment is preliminary and based on limited field data and other environmental data, and we need more research to confirm this hypothesis,” Chuanmin Hu of the USF College of Marine Science, who led the study and has studied Sargassum using satellites since 2006, told USF news. “On the other hand, based on the last 20 years of data, I can say that the belt is very likely to be a new normal,” said Hu.

Hu and his team have been using satellite imagery since 2006 to track sargassum.

“The data they analyzed from NASA’s Moderate Resolution Imaging Spectroradiometer (MODIS) between 2000-2018 indicates a possible regime shift in Sargassum blooms since 2011,” reads the USF news release.

Before 2011, sargassum was mainly found floating in patches around the Gulf of Mexico and Sargasso Sea. But in 2011, the seaweed growth started to explode in areas it hadn’t — like the central Atlantic Ocean.

“The ocean’s chemistry must have changed in order for the blooms to get so out of hand,” Hu said.

In July, Miami-Dade County commissioners issued an emergency call to clean up the mess. Scientists have been able to physically remove the algae mass and bring it back offshore near the Gulf Stream.

What are the impacts?

When the large sargassum mats make their way to the coast, they become crowded and make it hard for certain marine organisms to breathe.

“When it dies and sinks to the ocean bottom at large quantities it can smother corals and seagrasses,” reads the USF news release. “On the beach, rotten Sargassum releases hydrogen sulfide gas and smells like rotten eggs, potentially presenting health challenges for people on beaches who have asthma, for example.”

Because the blue-green clear waters of South Florida are a huge tourist draw, the massive sargassum blooms also cause a big hit to tourism, impacting the economy.

How do scientists monitor and forecast sargassum blooms?

USF scientists have developed the Satellite-Based Sargassum Watch System, which provides routine bulletins that are meant to give an outlook of Sargassum bloom probability in certain regions in the upcoming months, based on bloom conditions in previous months, and previous years.

How do we contribute to the problem?

What are researchers working on now?

Hu told USF news that predicting these blooms is difficult, since they depend on a wide range of factors. Researchers also do not fully understand how the sargassum belt affects fisheries.

“We hope this provides a framework for improved understanding and response to this emerging phenomenon,” Hu said. “We need a lot more follow-on work.”

For more information, visit: Scientists Discover the Biggest Seaweed Bloom in the World

What can we do?

To clean up the mess, scientists have been physically removing sargassum from coastal areas and relocating it back offshore near the Gulf Stream. Residents in South Florida who live on canals may consider installing weed control measures to prevent sargassum from entering the canals. Permitting from regulatory agencies is needed prior to installation of structures.

Where can I find up-to-date information?

USF scientists have developed the Satellite-Based Sargassum Watch System, which provides routine bulletins that are meant to give an outlook of Sargassum bloom probability in certain regions in the upcoming months, based on bloom conditions in previous months, and previous years.