Our 2009 volunteer fossil dig was at the famous Miocene site Thomas Farm in rural Gilchrist County, Florida. It ran from October 24 through November 24. Despite a couple of rained-out days near the end which limited us to 18 working days, we had a great response from the public, with 115 different participants working a total of 1265 hours. We had a great mix of veterans from previous fossil digs and first-timers. Together they helped make the dig a great success.

Many thousands of fossils were discovered by museum paleontologists and volunteers. As is usually the case at Thomas Farm, horses were abundant, especially Parahippus leonensis and Archaeohippus blackbergi. About 20 horse jaws and skuls were recovered, along with hundreds of isolated teeth, vertebrae, and limb bones. The area of the site we dug in proved to be unusually rich in fossils of the ancient alligator Alligator olseni, the tortoise Hesperotestudo tedwhitei, and the pond turtle Pseudemys sp. Among the most important specimens found this season was a nearly complete skull of Alligator olseni discovered by museum grad student Aldo Rincon, only the fourth skull of this species ever found.

Thomas Farm’s top predator, the bear-dog Amphicyon longiramus, also put in a good showing. In addition to the usual assortment of toe and foot bones we often find of this large species, a rare skull was found by volunteer Sheila Baker Lucas. This resulted in the largest plaster jacket we made this season, as the bear dog skull was found together in a rich concentration with a tortoise shell, a horse lower jaw, and a rhino vertebra (see pictures below). The digging efforts also resulted in an estimated four tons of fossil-bearing sediment to be processed at the museum for micro fossils. Thomas Farm certainly lived up to its reputation as Florida’s greatest fossil site. 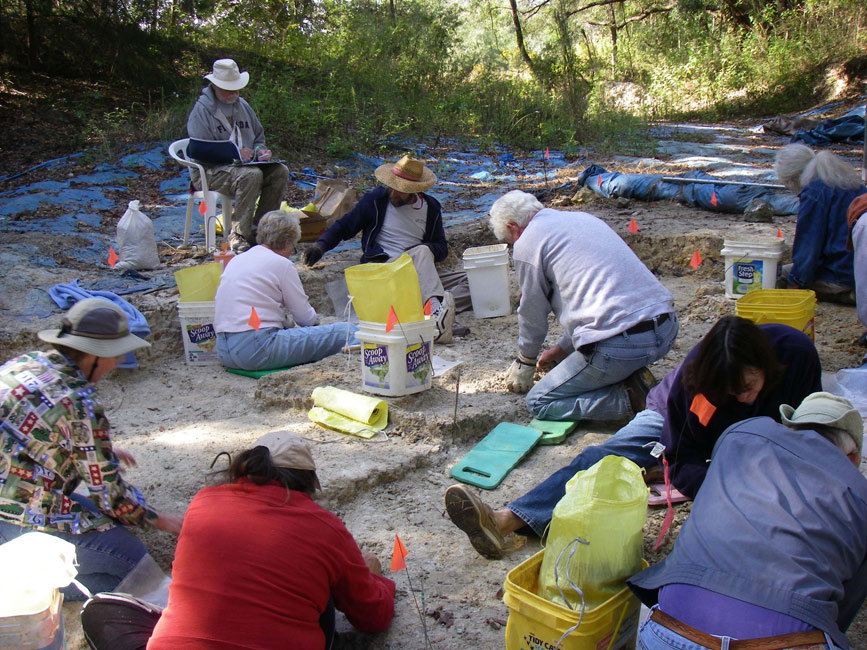 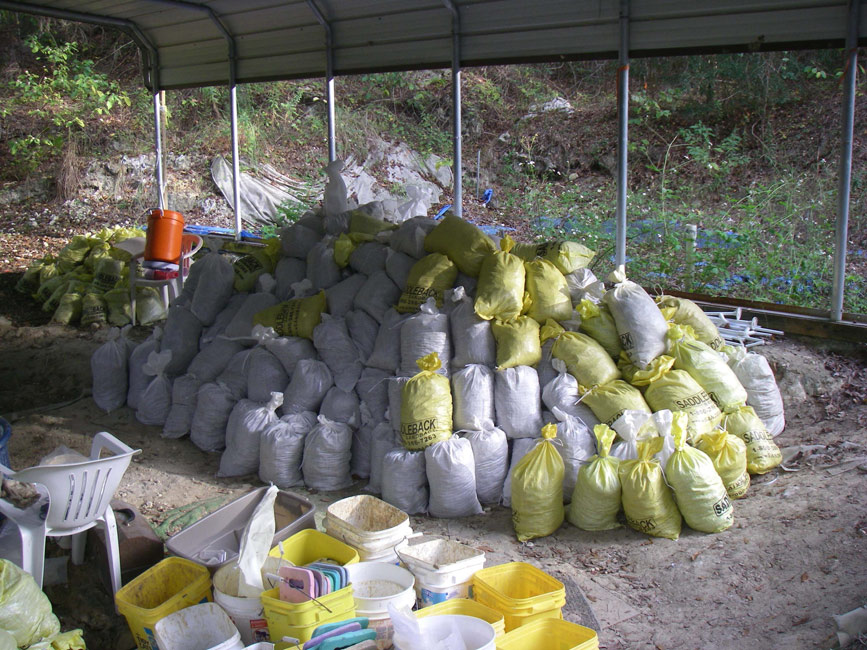 Filled bags of fossil-bearing sediment for screen-washing. By the end of the dig we had over three times these many bags filled | Photo © Richard Hulbert 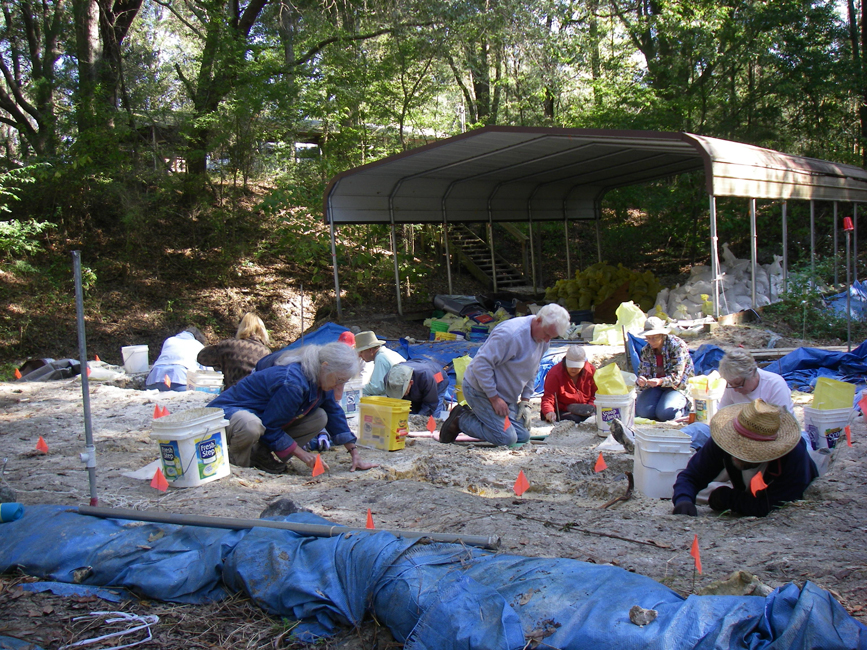 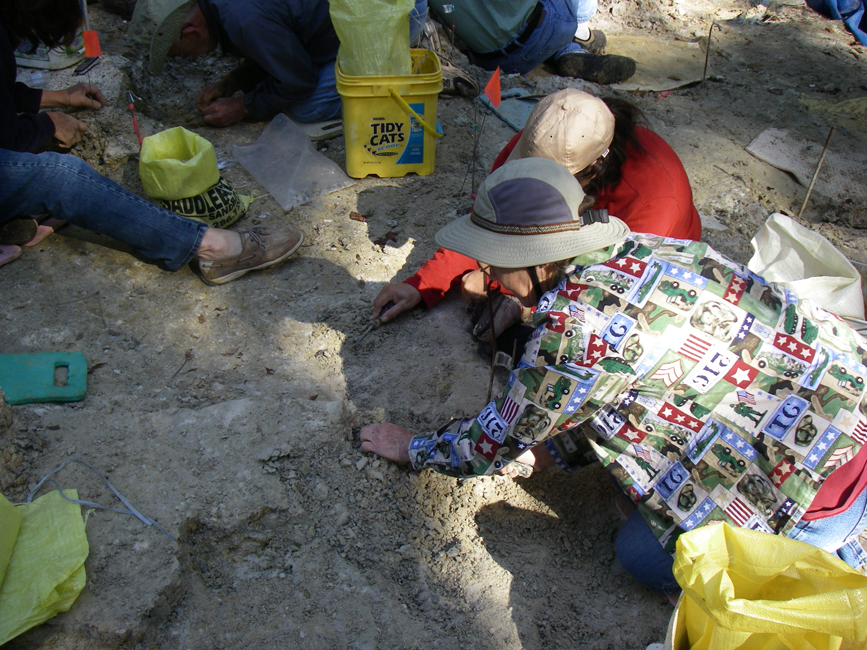 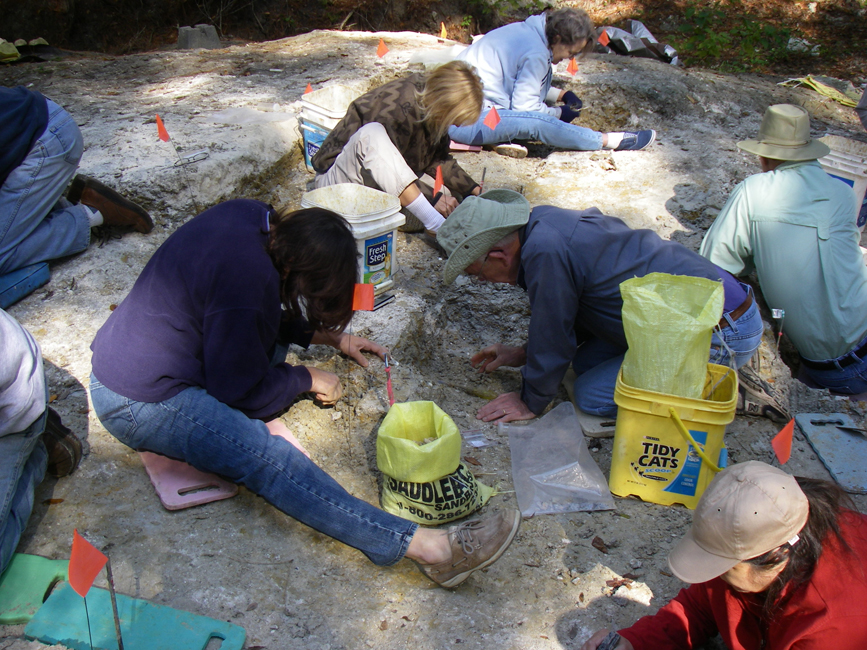 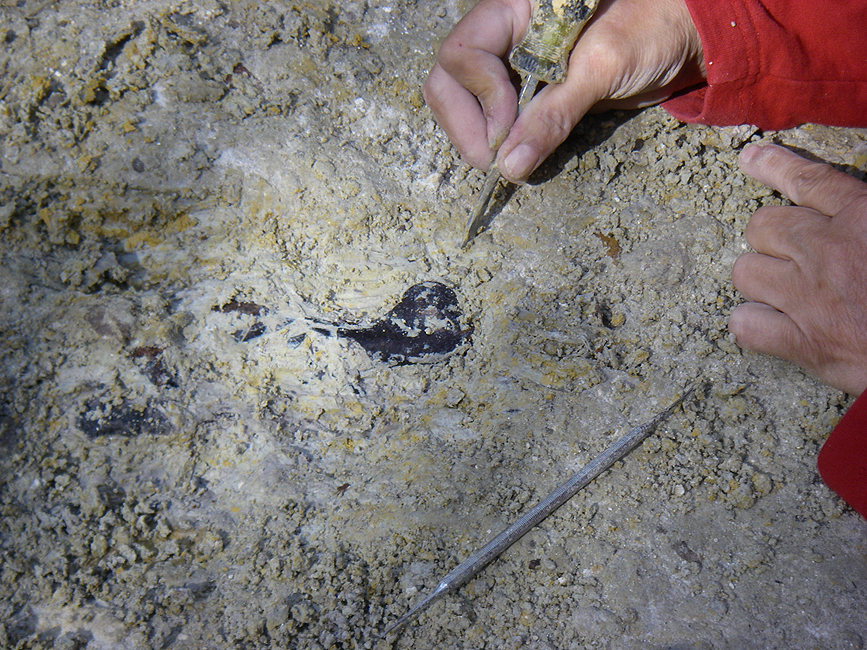 Another bone emerges from the sediment | Photo © Richard Hulbert 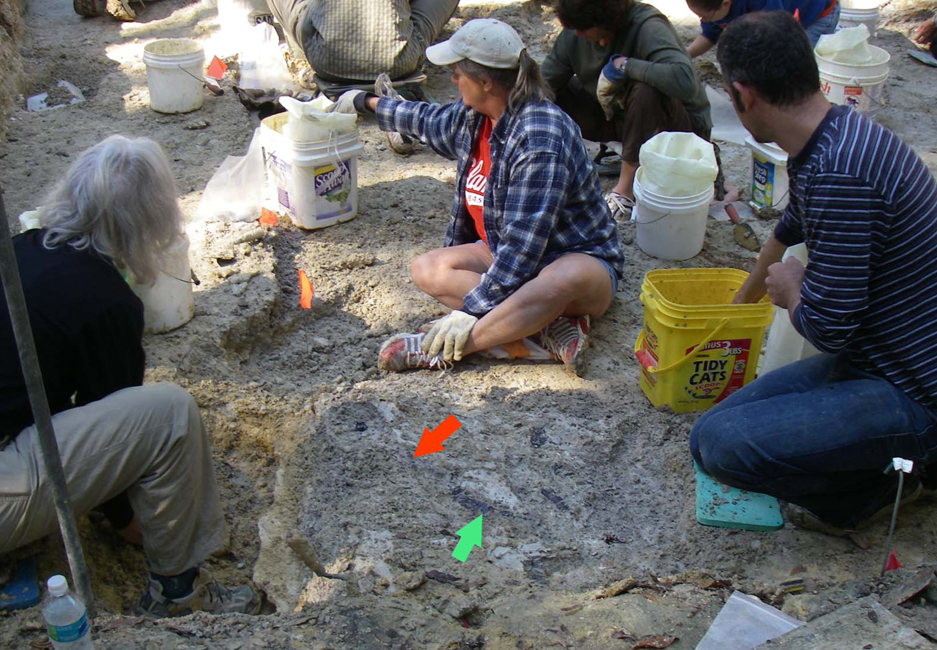 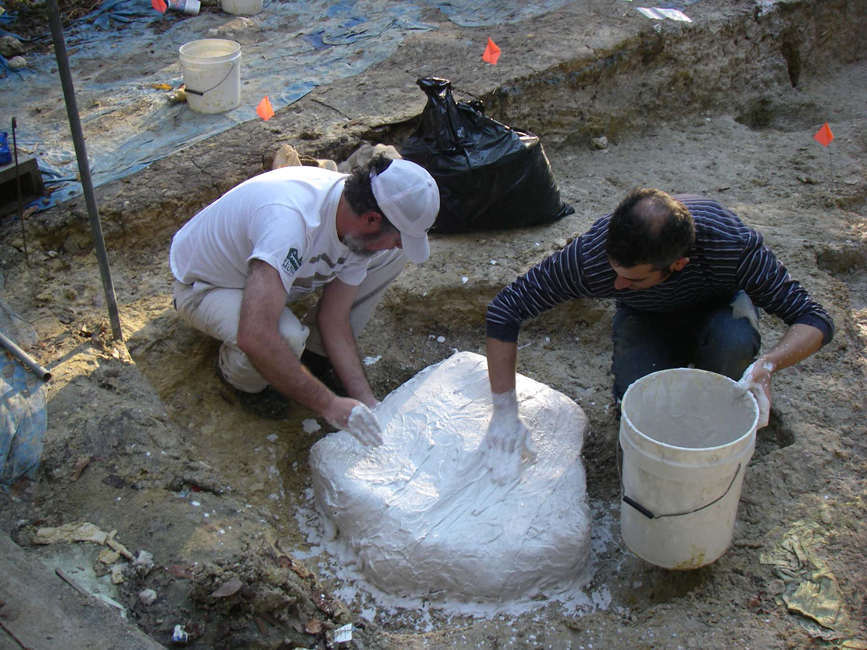 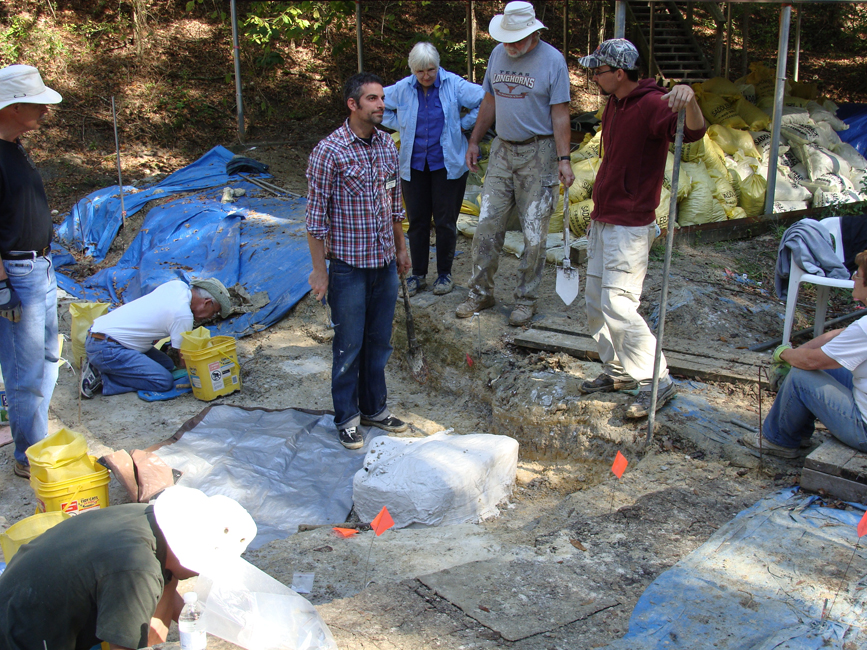 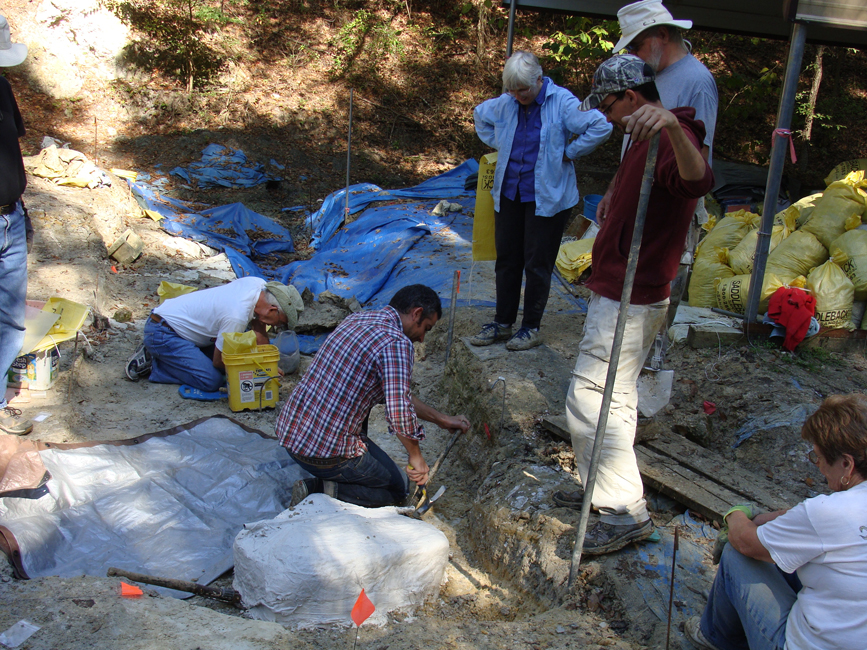 Jason Bourque hammers shovels under the plaster jacket containing the bear-dog skull. It was successfully flipped over and transported to the museum later that day | Photo © Ron Goate