When the first Floridians met the last mastodons

The Aucilla River Prehistory Project was an archaeological and paleontological project excavating a particularly rich series of deposits that yielded ancient megafaunal remains in association with Paleoindian artifacts.

The Aucilla River flows into the Big Bend area of northwestern Florida. The river channel connects what were separate watering holes many thousands of years ago.

To this day, the Aucilla is not a continuously flowing waterway to the Gulf of Mexico. Instead it plunges underground, then rises again several times. Its final emergence, as it runs to the Gulf, is from Nutall Rise.

Several sites were excavated along the Aucilla River. The Page/Ladson site and the Sloth Hole site have yielded evidence of the first Floridians hunting mastodons in Florida at least 12,200 years ago.

When sea level was down, water levels also were lower in rivers and lakes. Where the Aucilla River run today, there were just separate sinkholes. During these drier times, the sinkholes served as watering holes and animals congregated around them to drink.

Paleoindians used these watering holes for hunting large game, such as mastodons. Several Indian cultures lived and hunted in this area of Florida. These ivory shafts, made from tusks and used for hunting, were left by the earliest people, the Paleoindians.

Paleoindians also used chert spearpoints for hunting. These points were attached to the ivory shafts to make spears. A very rich concentration of chert spearpoints has been recovered from river bottoms in limestone areas of north and central Florida. 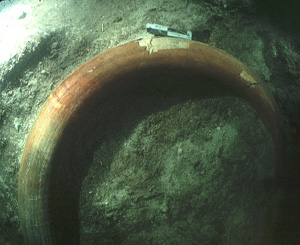 In 1993 a 7.5 foot mastodon tusk was found in situ (original deposition) at the 12,200 year old level of the Page/Ladson site. The tusk was brought to the surface and prepared for transport to the Florida Museum of Natural History in Gainesville.

This tusk had eight long cut marks on it at the point where it emerged from the skull. This indicated that it was removed from the skull by humans. These cutmarks, and radiocarbon dates, place Paleoindians hunting the mastodon here in Florida 12,200 years ago. This is one of the earliest records of humans in North America.

Finding humans in Florida so long ago challenges current theory about the migration of people into the North American continent. Paleoindians first came to North America via a land bridge between Russia and Alaska. They traveled down into what is now the United States through the Ice-Free Corridor between the Laurentide Ice Sheet to the east and the Cordilleran Ice Sheet to the west.

Previously, scientists believed that Paleoindians first traveled to the west before moving eastward. The new dates from the Aucilla River Prehistory Project suggest that the Paleoindians took an eastward path first, settling in river valleys and along the Atlantic seaboard before spreading westward hundreds of years later.

Highlights of the Aucilla Project

The Aucilla River Prehistory Project was a joint effort of scientists, students, and volunteers from the Florida Museum of Natural History, the Bureau of Archaeological Research, the University of Florida, Florida State University, several other states around the nation, and Canada. Volunteer divers came from all walks of life to participate in the project. They shared an interest in the people and animals of the past and in diving and technology.

Many types of specialized scientific or commercial equipment were used to support the work of the divers:

Many types of ancient animals have been found at the Aucilla River sites:

Plant materials were also collected and analyzed. Gourd seeds found inside the mastodon tusk root canal were used to carbon date the tusk at 12,200 years ago. The oldest gourd seed yet discovered in North American was found in the sediments of the Aucilla River (28,000 years ago). Pollen grains from the site have been studied and provide a picture of what the climate and seasons were like in this area 9,000-13,000 years ago. 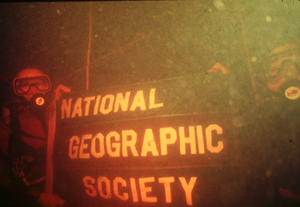 Support for the Aucilla River Prehistory Project was provided by The Florida Department of State, The National Geographic Society, and many private donors.