Phylogenetic analysis of six species of late Cenozoic Tapirus from North America and the three extant Neotropical species of Tapirus using 64 informative characters and three to five outgroups reveals strong support for a monophyletic Tapirus, and several subgroups within the genus. Tapirus johnsoni (late Miocene) consistently falls outside crown-clade Tapirus and is the sister taxon of the remaining eight species in the genus. “Tapiravus” polkensis (late Miocene-earliest Pliocene) is a member of crown-clade Tapirus and is referred to Tapirus. It is a member of a strongly supported clade that includes Tapirus bairdii and Tapirus veroensis. Members of this clade share a triangular-shaped interparietal, a deep, extensive fossa for the meatal diverticulum on dorsal surface of nasal, broad and flat posterior lacrimal process, and posterolaterally oriented lambdoidal crests.

The Tapirus terrestris-T. pinchaque clade shares a reduced (or lost) interparietal, shortened posterior process of the premaxilla, and a well developed anterior lacrimal process. Tapirus webbi (late Miocene of Florida) may be an early member of this clade, but current evidence is equivocal.

The results of the morphology-based parsimony analysis are in agreement with those of a molecular-based analysis with regards to the interrelationships of extant Neotropical species and a Miocene divergence between T. terrestris and T. bairdii. 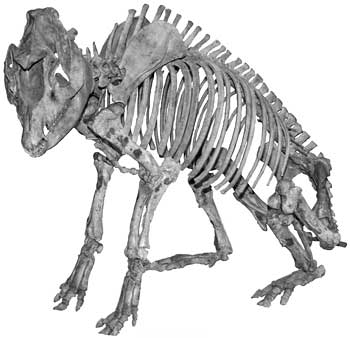 Download a copy of 2005 research paper by R. C. Hulbert published in the Bulletin of the Florida Museum of Natural History. This work includes the description of a new species, Tapirus webbi.

Tapirus polkensis from Florida and Tennessee

Tapirus polkensis is the smallest American species in the genus (either fossil or living), with an estimated body mass of 125 kilograms. It is known from the late Miocene and early Pliocene of central Florida and the late Miocene of eastern Tennessee. The species name comes from Polk County, Florida, where the first specimens where found. But the largest concentration of fossils is from the Gray Site in Tennessee, which has produced over 80 individuals, the largest number of tapirs ever found at one fossil site. Hulbert and co-authors (2009, Journal of Paleontology) described in detail its skull, mandible, and teeth. You can also request either a pdf or a printed reprint of the published paper from Richard Hulbert.

ABSTRACT – The previously poorly known ”Tapiravus” polkensis Olsen, 1960 (Mammalia, Perissodactyla, Tapiridae) is now known from abundant, well preserved specimens from both the type area in central Florida and from the Gray Fossil Site (GFS) in eastern Tennessee. The latter has produced over 75 individuals, the greatest number of tapirids from a single fossil site, including many articulated skeletons. Almost all linear measurements taken on skulls, mandibles, and cheek teeth from GFS have coefficients of variation less than 10 (most between 3 and 7), indicating the presence of a single species. However, the sample reveals considerable intraspecific variation for a few key morphologic features, including development of the sagittal crest, outline shape of the nasals, and number and relative strength of lingual cusps on the P1. The Florida sample of T. polkensis is more limited, but has the same state as the GFS sample for all preserved characters of systematic significance, and while the Florida teeth are on average smaller (especially narrower lower cheek teeth), they fall either within or just below the observed range of the Gray Fossil Site population. The new material supports a reassignment of ”Tapiravus” polkensis to the genus Tapirus, and demonstrates that the geologic age of the species is significantly younger than previously thought, Hemphillian rather than Barstovian. Tapirus polkensis is the smallest known North American Tapirus, and smaller than any of the extant species in the genus, with an estimated average mass of 125 kg.

New species of Tapirus from the early Pleistocene of Florida

Download a copy of 2010 research paper by R. C. Hulbert published in the Bulletin of the Florida Museum of Natural History. This work includes the description of Tapirus lundeliusi and a review of all tapirs from the Blancan Land Mammal Age known from Florida.