Volunteering in the Field

The Division of Vertebrate Paleontology has at least one fossil collecting session per year that uses volunteer assistance.

This will generally be during the drier and cooler times of the year, either spring or fall. Age limits and physical requirements will vary depending on the conditions at the particular fossil site we are working. 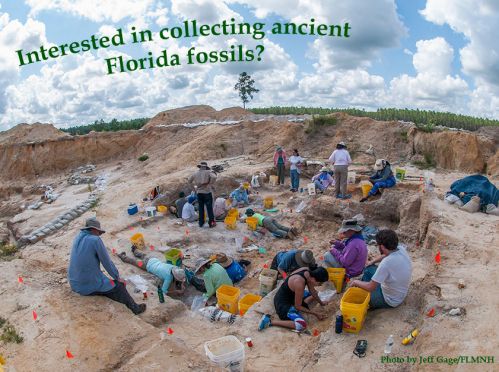 The Spring 2021 field season at Montbrook will begin on Tuesday January 26 and end on Saturday May 8. During this interval we will work at the site four days per week, on Tuesdays, Wednesdays, Thursdays, and Saturdays. Due to the ongoing pandemic, the number of volunteers working each day has been greatly decreased to allow for greater distance between each digger. Masks must be worn at all times while at the site.

At this time we are taking reservations only from those that volunteered at the site during the fall of 2020. Those in this group have been contacted by email. Starting January 25, anyone who volunteered at the Montbrook site between 2016 and 2019 and who has been fully vaccinated for Covid-19 can contact Richard Hulbert by email to determine which digging dates are available.

The only persons with no previous experience working at the Montbrook site we are currently accepting as new volunteers are current University of Florida faculty, staff, students, and volunteers who have passed the university’s return to campus protocols. If you meet these criteria and are interested in volunteering at the site, contact Richard Hulbert for information on how to apply.

It is our hope that by the Fall of 2021 we can return to pre-Covid levels of volunteers at the site.

There is no cost to volunteer. However, if you wish to contribute money to help us maintain our annual volunteer fossil digs and to process and store the collected fossils, you can use this secure link to donate online. Donations through the UF Foundation are tax deductible.

This fall we excavated at Montbrook from November 7 to December 9. One hundred ten volunteers worked a total of 1,426 person-hours in 24 days! Museum staff and UF paleontogy students dug for an additional 715 hours. This despite unusually hot weather at the start of the seaon and cold, rainy days towards the end.

Our top volunteers, who each worked 20 or more hours were: David Cox, John Freund, Susan Harris, John Helling, Vickie Jacobs, Larry Jensen, Sharon Lord, Ken and Tammy Marks, Melanie Masdea, Donna McCullough, Garrett and Steven Munger, Judy Peterson, Deborah Poulalion, Arnold Sacco, Carol and Bill Sewell, Dean Warner and Michele Wilbanks. Like last spring, Susan Harris narrowly surpassed Carol and Bill Sewell to claim top honors for most hours worked (71.5). While many of those names are holdovers from prior seasons, it is also great to be able to add some new names to the top volunteers list. Thank you all so much for your dedication to the fossil site and to the Hodge family for allowing us continued access to the site and working to solve our drainage problems!

Some highlights from this season:

208 volunteers, 51 students for course credit, 14 teachers for professional development, and 38 Florida Museum staff devoted a grand total of 4,977 hours to Montbrook this season! The Spring 2018 digging season ran for 90 days, from Friday, January 19th until Sunday, May 13th.

Check out our Museum Voices blog for Florida Vertebrate Paleontology student content from their experiences digging at Montbrook this season.

Thanks so much to everyone who has volunteered their time at Montbrook! None of this would’ve happened without your help. A special thanks to those volunteers who helped with the final push to remove those last large specimens and who worked over 30 hours this season. These people include (in alphabetical order): William Buhi, David Cox, Joshua Doby, David Evans, Joseph Fulco, Ben Grubbs, Susan Harris, John Helling, Daniel Ibison, Maya Ibison, James Kendrick, Sharon Lord, Margaret Messineo, Paula Mitchell, Robert Mitchell, Garrett Munger, Steven Munger, Andrew Puckett, Carol Sewell, William Sewell, Sharon, Shears, Emily Sonnenberg, Maryan Stubbs, , Dean Warner, and Judith Wilbanks. Susan Harris wins the award for most volunteer hours at 152.25 this season; this is not including the hours she also spends preparing fossils back at the museum! Thank you Susan! Second place goes to Garrett Munger at 123.25 hours this season, which is also incredible because he is in high school and plans to volunteer in the collection this Summer! Also a huge thank you to all Florida Museum vertebrate paleontology staff and students who make this possible! 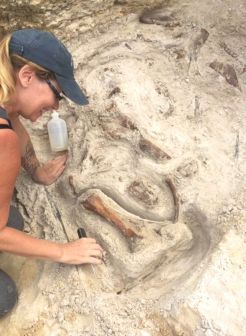 From October 5th to December 18th, Montbrook has seen 177 volunteers digging 5 days per week, for a grand total of 2,170 person-hours in 53 days!

Thank you all so much for your dedication to the fossil site and to the property landowner for allowing us such access! 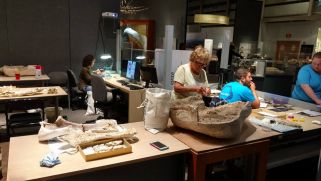 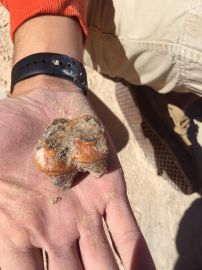 Some highlights from this season:

The very first day of digging following the summer break, a baby gomphothere skeleton was exposed. Since then it’s been Gomph-A-Palooza. 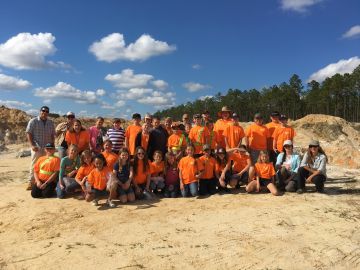 We celebrated our two-year anniversary, expanded the pit, prepared plaster jackets for the public in the Florida Museum’s 100-Year Anniversary exhibit, cataloged our 10,000th specimen, and hosted a tour of the site for our youngest group yet, the Earth Sciences class of East Marion Elementary.

We plan to dig 84 days for the Spring 2018 season. Imagine the possibilities!

Total number of volunteers who worked at the site between 10/1/16 and 5/21/17 is 380, who collectively visited the site a total of 1139 times and worked a total of 5,428 hours.This is 59% of the total hours put into the excavation at Montbrook. The effort by volunteers, FLMNH staff, students, and teachers during the season resulted in a total of 9,221 hours worked.

Thanks to our unusually dry weather, we only had 3 days rained out, two of those because of Hurricane Matthew early in October. Therefore, we had even more possible days to excavate fossils than anticipated. Collectively 168 different volunteers participated in the dig this season, contributing over 1,800 hours of work at the site and finding many thousands of fossils, including the first skull from a carnivore found at Montbrook. We thank again all those who came out and worked with us, in good weather or bad, to make this dig another great success.