“Unprovoked bites” are defined as incidents in which a bite on a live human occurs in the shark’s natural habitat with no human provocation of the shark.

“Provoked bites” occur when a human initiates interaction with a shark in some way. These include instances when divers are bitten after harassing or trying to touch sharks, bites on spearfishers, bites on people attempting to feed sharks, bites occurring while unhooking or removing a shark from a fishing net and so forth.

Of the remaining 25 cases, four involved bites to motorized or non-motorized marine vessels (“boat bites”) and one involved shark-inflicted post-mortem bites (“scavenge”). Five cases were regarded as “doubtful” or incidents that likely did not involve a shark. These included one case attributed to a stingray, three attributed to bony fish and one to injury associated with scraping against a rock.

In a single case, the nature of the incident was unclear with the available data (“No assignment could be made”). An additional 14 cases could not be confirmed as a shark-human interaction (“Not confirmed”). ISAF will continue to investigate these cases in collaboration with local law enforcement and medical professionals until they can be resolved satisfactorily.

The 2021 worldwide total of 73 confirmed unprovoked cases was in line with the most recent five-year (2016-2020) average of 72 incidents annually. However, unprovoked case numbers were significantly down in 2020, which we attribute to lockdowns associated with the pandemic. There were 11 shark-related fatalities this year, 9 of which were assigned as unprovoked. This number is above the annual global average of five unprovoked fatalities per year.

Annual fluctuations in shark-human interactions are common. Despite 2020’s and 2021’s spike in fatalities, long-term trends show a decreasing number of annual fatalities. Year-to-year variability in oceanographic, socioeconomic and meteorological conditions significantly influences the local abundance of sharks and humans in the water.

Consistent with long-term trends, the United States recorded the most unprovoked shark bites in 2021, with 47 confirmed cases. This is 42% higher than the 33 incidents that occurred in the U.S. in 2020. The 47 cases represent 64% of the worldwide total. This represents an increase from 2020 when 58% of the worldwide unprovoked bites occurred in the U.S.

Brazil, New Zealand and South Africa all had three bites and one fatality each in 2021. New Caledonia reported two incidents, both of which were fatal. Single incidents occurred in Canada, Ecuador and St. Kitts and Nevis.

Florida had most unprovoked bites in U.S.

For decades, Florida has topped global charts in the number of shark bites, and this trend continued in 2021. Florida’s 28 cases represent 60% of the U.S. total and 38% of unprovoked bites worldwide. This is consistent with Florida’s most recent five-year annual average of 25 incidents.

In total, unprovoked bites by state were Hawaii (6), South Carolina (4), North Carolina (3), Georgia (2), a single incident in Maryland, and three incidents in California, one of which was fatal.

In Florida, Volusia County had the most shark bites (17), representing 63% of the state’s total. This represents an increase from the five-year annual average of nine incidents in the area; however, Volusia County experiences considerable variation in the number of bites from one year to the next. The remaining bites occurred in Brevard (2), Miami-Dade (2), and St. Lucie (2), with single incidents in Broward, Martin, Manatee, Palm Beach and St. Johns counties.

Most bites related to surfing and board sports

Following recent trends, surfers and those participating in board sports accounted for most incidents (51% of the total cases). This group spends a large amount of time in the surf zone, an area commonly frequented by sharks, and may unintentionally attract sharks by splashing, paddling and “wiping out.” Swimmers and waders accounted for 39% of incidents, with the remaining incidents divided among snorkelers/free divers (4%) and body-surfers (6%).

Risk of being bitten by a shark remains extremely low

Short-term trends still show both fatal and non-fatal bites to be decreasing. The total number of unprovoked shark bites worldwide is extremely low, given the number of people participating in aquatic recreation each year. This year’s increase in fatalities does not necessarily constitute a shift in the long-term trends. Fatality rates have been declining for decades, reflecting advances in beach safety, medical treatment and public awareness.

While the incidence of fatal bites in 2021 was higher than is typical, we do not consider this cause for alarm. At this time, there is no evidence that the recent spike in fatalities is linked to any natural phenomena. Rather it is likely the consequence of chance, a conclusion underscored by the fact that the number of unprovoked bites is in line with recent five-year trends.

ISAF offers resources for reducing your risk of a shark bite and instructions for what to do if you encounter a shark.

The effects of COVID-19 on bite numbers

The incidence of bites both in the U.S. and globally have been declining. The numbers for 2020 represent a more precipitous drop than expected based on an analysis of long-term trends. 2021’s numbers are back at typical levels, which we attribute to the resumption of marine recreational activities after the previous year’s pandemic-associated lockdowns. However, the first responders with which ISAF collaborates have remained focused on COVID-19 mitigation. As a result, ISAF saw a higher number of “Not confirmed” cases for the second year in a row. ISAF has and will continue to investigate cases from previous years as local resources and information become available. 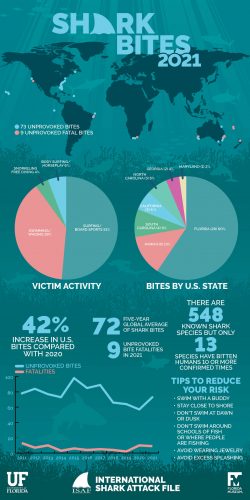 After three years of declines, shark bites are again on the rise By Jerald Pinson

Members of the press are encouraged to check out our “Media Resources” page and the “Quick guide to the 2021 ISAF Annual Report” for individual sections of the infographic, an excel file of the 2021 data, and other helpful resources.