As the worldwide human population continues to rise year after year, so does our interest in aquatic recreation. The number of shark attacks in any given year or region is highly influenced by the number of people entering the water. 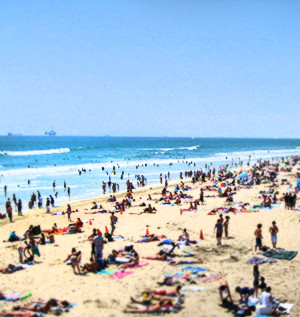 In Florida, the increases in attendance and shark attacks also mirrored each other, but rescues declined, an indication of a better educated public avoiding the occurrence of rip currents. The trends of attendance and rescues in California are also very similar, but the number of attacks has declined, likely because surfers and divers are taking more care in avoiding white shark “hot spots.” One has a far greater chance of drowning than dying by shark attack.

Note the nearly identical increase in beach attendance, drowning rescues, and shark attacks on U.S. beaches during the 1994-2000 period.

To calculate the odds of suffering injury or death from any source of risk requires data on the number of injuries or deaths (the numerator) which can be divided by the amount of human hours subjected to that risk (the divisor) to produce a rate.  Producing data on injuries and deaths is a doable job for most sources of risk, but gathering effort data – the human hours engaged in an activity – is difficult in most cases and darn near impossible for some activities.  As a result, calculating statistically valid odds of injury or fatality are extremely difficult to produce and the odds of risk we see quoted in the media often are bogus.  More often we see total numbers of injuries or deaths which, if compared from year to year, is often misinterpreted because the human effort varies from year to year, usually upwards because the human population rises every year.  Procuring effort data – human hours exposed to any risk – is virtually impossible.  The best we usually can do is use a surrogate, often population, as a divisor.

In an attempt to fine tune the divisor to calculate more accurate odds of being attacked and/or dying by a shark, we have used beach attendance data kindly supplied by the U.S. Lifesaving Association for a large number of United States beaches in the year 2000. These beaches were located on both the Atlantic and Pacific coasts and geographically and ecologically represent areas where sharks and humans routinely interact. Using ISAF data, we quantified the number of shark attacks that occurred on these specific beaches during that year.

In this analysis, we use the number of beach users as the divisor.  While this is a huge step forward from using the population of the United States or of the states where the beaches were located as a divisor, there are still problems.  For example, not all beach users went into the water and not all spent the same amount of time in the water.  Bathers did each act the same in the water – some waded, others surfed, swam, etc. – and each wore uniquely colored/shaped/sized bathing suits and possessed varying base skin colors.  Some were sweaty when they entered the water and some wore perfume, deodorant, or suntan lotion.  Some women were menstruating and some bathers had open wounds or sores.  So commonality was limited to the bathers being Homo sapiens!  One can see how difficult it is to take the next step, determining which factors contribute to a shark attack.