What Color Apparel or Gear Should I Wear in the Water?

Sharks see contrast particularly well, so any high-contrast color apparel or gear used by a human in the water is especially visible to sharks. The bright yellow color traditionally used in water safety flotation devices and rafts is readily seen by human rescuers looking for missing persons in the sea. Many believe this may make you more visible to sharks and is jokingly called “yum yum yellow”. However, most sharks are colorblind, and yellow is likely not as attractive as once popularly believed. 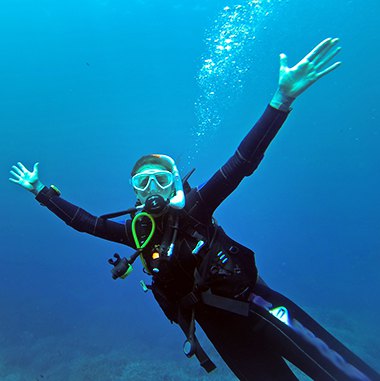 Should one replace all these devices with more drab-colored items? Of course, there is a trade-off involved, but most would agree that the benefit of increasing one’s chances of being rescued far outweighs the minimal risk of attracting a shark.

Alternatively, divers and swimmers can probably reduce the chance of an interaction with a shark by avoiding bright and highly contrasting swimwear or dive gear. We personally prefer to use dark blue or black fins, mask, tank, and wetsuit while diving.