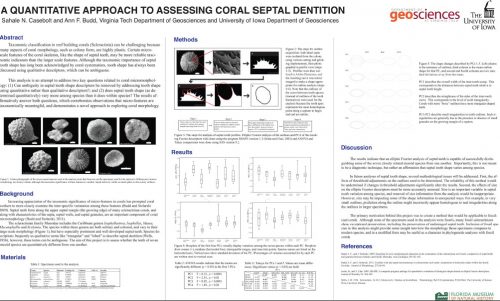 Taxonomic classification in reef building corals (Scleractinia) can be challenging because many aspects of coral morphology, such as colony form, are highly plastic. Certain micro-scale features of the coral skeleton, like the shape of septal teeth, may be more reliable taxonomic indicators than the larger scale features. Although the taxonomic importance of septal tooth shape has long been acknowledged by coral systematists, tooth shape has always been discussed using qualitative descriptors, which can be ambiguous. This analysis is an attempt to address two key questions related to coral micromorphology: (1) Can ambiguity in septal tooth shape descriptors be removed by addressing tooth shape using quantitative rather than qualitative descriptors?; and (2) does septal tooth shape (as determined quantitatively) vary more among species than it does within species? The results affirmatively answer both questions, which corroborates observations that micro-features are taxonomically meaningful, and demonstrates a novel approach to exploring coral morphology. 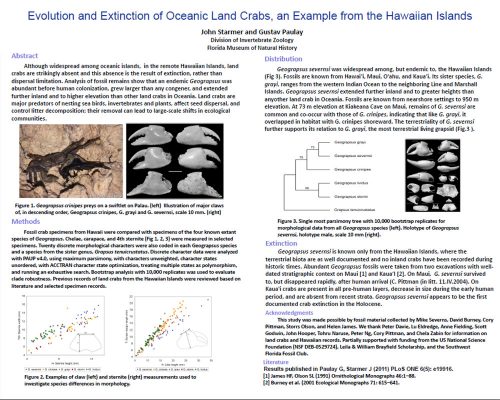 Evolution and Extinction of Oceanic Land Crabs, an Example from the Hawaiian Islands

Although widespread among oceanic islands, in the remote Hawaiian Islands, land crabs are strikingly absent and this absence is the result of extinction, rather than dispersal limitation. Analysis of fossil remains show that an endemic Geograpsus was abundant before human colonization, grew larger than any congener, and extended further inland and to higher elevation than other land crabs in Oceania. Land crabs are major predators of nesting sea birds, invertebrates and plants, affect seed dispersal, and control litter decomposition; their removal can lead to large-scale shifts in ecological communities. 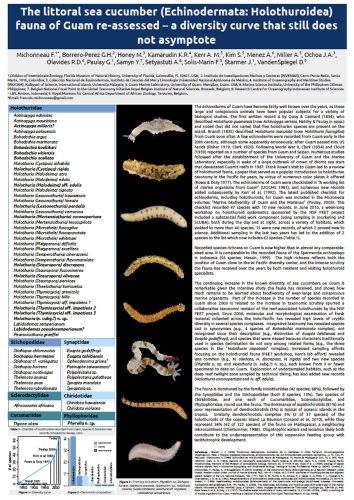 The littoral sea cucumber (Echinodermata: Holothuroidea) fauna of Guam re-assessed – a diversity curve that still does not asymptote

The Micronesian island of Guam has been an important site for the study of tropical holothurian taxonomy for almost 200 years. Despite substantial attention by both expeditions and resident taxonomists, new records are still regularly added to the fauna, demonstrating the challenge of documenting even such large and well-known animals in a small hyper-diverse area. Guam is the type locality of species described by Quoy & Gaimard (1833) and Brandt (1835). A survey of the sea cucumber fauna by Rowe & Doty (1977) led to one of the most used guides for the identification of tropical Pacific sea cucumbers because of the color illustrations of living animals it presented. Focus on echinoderms including holothurians continued with numerous new records added in the following decades. Paulay (2003) summarized the fauna last, recording 46-47 species. At this stage the fauna was thought to be well documented. A week-long workshop on holothurian systematics sponsored by the NSF PEET project in 2010 included a substantial field work component, sampling both during the day and night, with snorkeling and SCUBA, across a variety of habitats. This survey yielded 40 species, including numerous new records and even species. Further sampling by Kerr’s lab since the workshop has added additional records. The holothuroid fauna of Guam now comprises 64 species in 17 genera and 7 families. Half of the 18 newly recorded species are the result of unravelling cryptic species in complexes, the other half are based on new collections. Ten species are known from single specimen, suggesting that much still remains to be learned about the fauna.

Naticid gastropods are a well-known group of predators in soft-bottom marine communities, consuming prey after drilling a hole through its shell. Numerous studies on fossil and extant naticid predation have taken advantage of these highly quantifiable traces in molluscan dead-assemblages to understand the ecology and evolution of naticids and their prey. Common approaches to evaluate site-selectivity in drilling predator behavior by naticid grastopods have been based on quadrat counts (Kowalewski, 2002), which offer inadequate spatial resolution. A number of statistical tests have also been used to identify drillhole clustering (Dietl et al., 2001). However, these approaches do not provide direct information about preferred attack location. Additionally, they may fail to identify stereotypic behavior where predators have preference for attacking more than one region of the prey’s shell, or when assemblages mix records from multiple species of predators. In general, existing methods for analyzing site-selectivity ignore one of the key strengths of that process – drillholes are spatially-explicit, i.e., they are located at a single site on the prey’s skeleton and may be mapped. In this study, we combined two distinct approaches, morphometrics and point-pattern analysis, in order to understand site selectivity in the drilling behavior of naticid gastropods. The distribution of traces left by predators on their prey is modeled as a probability density function using the basic form of kernel estimation (Silverman 1986). Finally, we evaluate the method by using three independent surveys, feeding trials, field- and museum-sourced data. 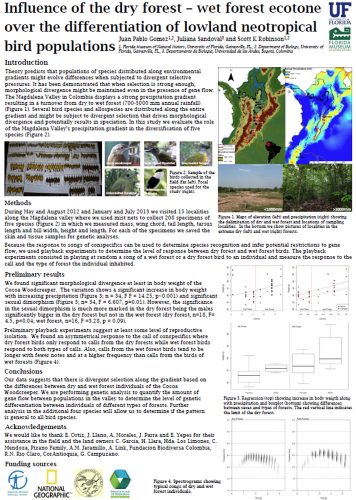 Theory predicts that populations of species distributed along environmental gradients might evolve differences when subjected to divergent selective pressures. It has been demonstrated that when selection is strong enough, morphological divergence might be maintained even in the presence of gene flow. The Magdalena Valley in Colombia displays a strong precipitation gradient resulting in a turnover from dry to wet forest (700-5000 mm annual rainfall). Several bird species and allospecies are distributed along the entire gradient and might be subject to divergent selection that drives morphological divergence and potentially results in speciation. In this study we evaluate the role of the Magdalena Valley’s precipitation gradient in the diversification of five species. 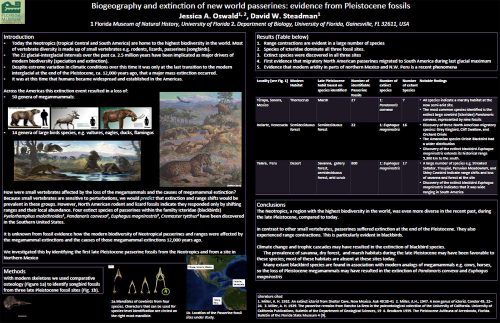 Today the Neotropics (tropical Central and South America) are home to the highest biodiversity in the world. Most of vertebrate diversity is made up of small vertebrates e.g. rodents, lizards, passerines (songbirds). The 22 glacial-interglacial intervals over the past ca. 2.5 million years have been implicated as major drivers of modern biodiversity (speciation and extinction). Despite extreme variation in climatic conditions over time it was only at the last transition to the modern interglacial at the end of the Pleistocene, ca. 12,000 years ago, that a major mass extinction occurred. It was at this time that humans became widespread and established in the Americas. Across the Americas this extinction event resulted in a loss of 50 genera of megamammals and 14 genera of large bird species, e.g. vultures, eagles, ducks, flamingos. How were small vertebrates affected by the loss of the megamammals and the causes of megamammal extinction? Because small vertebrates are sensitive to perturbations, we would predict that extinction and range shifts would be prevalent in these groups. However, North American rodent and lizard fossils indicate they responded only by shifting ranges and their local abundance. Four extinct species of passerines within the family Icteridae (blackbirds) Pyelorhamphus molothroides, Pandanaris convexa, Euphagus magnirostris, Cremaster tytthus have been discovered in the Southern United States. It is unknown form fossil evidence how the modern biodiversity of Netotropical passerines and ranges were affected by the megamammal extinctions and the causes of those megamammal extinctions 12,000 years ago. We investigated this by identifying the first late Pleistocene passerine fossils from the Neotropics and from a site in Northern Mexico. 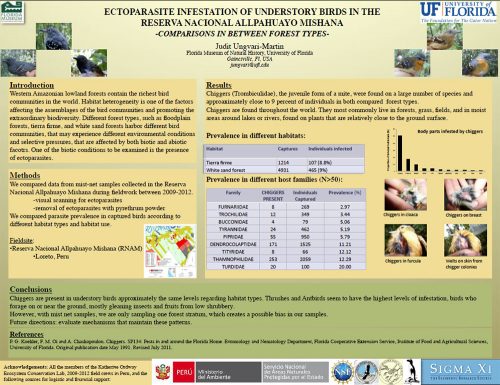 Western Amazonian lowland forests contain the richest bird communities in the world. Habitat heterogeneity is one of the factors affecting the assemblages of the bird communities and promoting the extraordinary biodiversity. Different forest types, such as floodplain forests, tierra firme, and white sand forests harbor different bird communities, that may experience different environmental conditions and selective pressures, that are affected by both biotic and abiotic factors. One of the biotic conditions to be examined is the presence of ectoparasites. 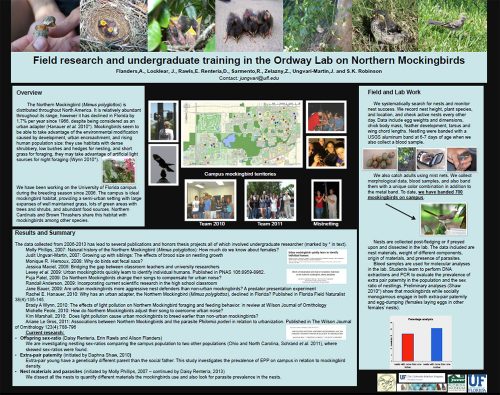 The Northern Mockingbird (Mimus polyglottos) is distributed throughout North America. It is relatively abundant throughout its range, however it has declined in Florida by 1.7% per year since 1966, despite being considered as an urban adapter. Mockingbirds seem to be able to take advantage of the environmental modification caused by development, urban encroachment, and rising human population size: they use habitats with dense shrubbery, low bushes and hedges for nesting, and short grass for foraging, they may take advantage of artificial light sources for night foraging. We have been working on the University of Florida campus during the breeding season since 2006. The campus is ideal mockingbird habitat, providing a semi-urban setting with large expanses of well maintained grass, lots of green areas with trees and shrubs, and abundant food sources. Northern Cardinals and Brown Thrashers share this habitat with mockingbirds among other species.