In addition, there is an unsorted backlog of about 12,000 lots (about 120,000 specimens). Most of the uncatalogued and backlog material was acquired through transfer of the important collections previously housed at the National Marine Fisheries Service biological laboratories in Miami; Pascagoula, MS; and the University of Miami. The Florida Museum of Natural History ichthyology collection contains primary and secondary types of more than 950 taxa of freshwater and marine fishes.

Representative specimens of over 700 species have been cleared and stained. A radiograph collection and the original field notes of numerous individuals and organizations, including station sheets for virtually all U.S. Fish and Wildlife Service/National Marine Fisheries Service and University of Miami research vessels, are maintained.

The principal strengths of the Florida Museum fish collection are, in approximate order of importance, its holdings of (1) western and eastern Atlantic shelf and deepwater marine fishes, (2) western Atlantic reef fishes, (3) North American freshwater fishes, especially from the southeastern United States, and (4) freshwater fishes from certain parts of Central America, South America and the West Indies. Of the above, categories (1), and (2) are nearly equal in importance.

These collections have been substantially augmented by the field activities of Florida Museum personnel and donations made over the last 20 years. Eastern Atlantic collections from the Gulf of Guinea are available in some abundance. The western Atlantic collections acquired from the National Marine Fisheries Service Pascagoula laboratory and University of Miami are generally from greater depths (to 1000 fathoms) and represent some of the Museum’s most valuable resources. Deepwater anguilliform, salmoniform, stomiiform, aulopiform, myctophiform, and ophidiiform families are particularly well represented. For certain families (i.e. Searsiidae, Alepocephalidae) these collections may be among the best North American holdings from the western Atlantic region.

The holdings of western Atlantic reef fishes are among the most important in existence, with the following geographic areas most heavily collected: Florida, the Bahamas, Isla de Providencia, the Cayman Islands, the Virgin Islands, and the Lesser Antilles (Antigua, Grenada, St. Lucia, St. Vincent). Smaller numbers of reef fish collections exist from Puerto Rico, Jamaica, Sombrero Island, other Lesser Antilles islands, continental islands off northern South America and Brazil, and Ascension Island. There are a substantial number of reef fishes from off the Carolinas.

Eastern Pacific reef collections are present from the Pearl Islands south to Ecuador. Also available are a fair number of Indo-Pacific reef fishes acquired by staff collecting and by donations received from the Bishop Museum and the National Museum of Natural History. Over 200 shore and estuarine collections have been made from the Caribbean coasts of Costa Rica and Panama. 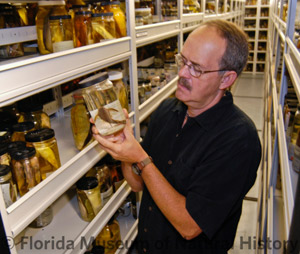 Holdings of freshwater fishes are greatest from the southeastern United States, particularly Florida. In addition, an effort has been made to obtain as complete a taxonomic and geographic coverage of freshwater species as possible from throughout North America. As a result, over 90 percent of the freshwater fish species from the United States and Canada are represented in the Florida Museum’s collection.

Best represented are members of the Catostomidae, Centrarchidae, Cyprinidae, Elassomatidae, Fundulidae, Ictaluridae, Lepisosteidae, Percidae, Petromyzontidae and Poeciliidae. Freshwater fishes from Bolivia, Venezuela, Colombia, Hispaniola, Guatemala, Panama and Costa Rica are currently represented in moderate to large numbers in the collection. The Florida Museum’s Hispaniolan holdings are unsurpassed and the Venezuelan holdings are growing continuously. A wide spectrum of characoid, gymnotoid and siluroid families, cichlids, and poeciliids are especially well represented.

New collections by the staff and students, as might be expected, center on their areas of research interest. Federal and state biological agencies, academic researchers, and consulting firms are also major depositors. Areas of highest growth are (1) freshwater fishes from the southeastern United States, the Greater Antilles, Central America and northern South America, (2) estuarine and marine collections from the southeastern United States, the Gulf of Mexico and Caribbean, and (3) elasmobranch material from throughout the world.

Acquisition of large holding tanks has facilitated the collection and accessions of large specimens, especially sharks and marine teleosts. The U.S. Geological Survey’s Florida Caribbean Science Center has been particularly active in surveying Southeast U.S. freshwater fishes and their valuable collections are continually accessioned into the Florida Museum collection. Other frequent sources of donations include federal and state agencies, numerous individuals associated with universities, and consulting firms.