The All Catfish Species Inventory (Order Siluriformes) or “All Catfishes” as it became known, was funded by NSF as Phase I of a PBI of the Otophysi and was completed in 2009. 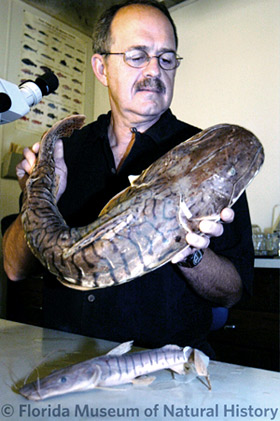 Otophysi (minnows, characins, electric fishes, and catfishes) comprises 72% of all freshwater fishes. As indicated by the large number of new species described (430), papers published (285), specimens collected (~300,000), tissues taken (11,195), phylogenetic relationships revealed, and information made available online, All Catfishes was a huge success. It resulted in the training of 3 postdoctoral fellows and 10 graduate students at the PI’s institutions, and supported the training of about 60 graduate students in foreign countries.

Although 430 new species of catfishes were described, many projects supported by All Catfishes, including familial and generic revisions, are in progress, and another 350-500 species are expected to be described as a result of All Catfishes-supported activities. Ongoing studies include revisions, several with a dozen or more new species, of the amphiliid genera Doumea (under study by C. Ferraris, R. Vari, and P. Skelton), Zaireichthys (D. Tweedle), and Amphilius (A. Thomson and L. Page); doradids (M. Sabaj); plotosids (P. Unmack and G. Allen); the pimelodid genera Pimelodus (M. Rocha) and Hypophthalmus (M. Littmann); the mochokid genera Chiloglanis (J. Friel and T. Vigliotta) and Synodontis (J. Wright); the loricariid genera Panaque (N. Lujan), Loricaria (M. Thomas), and Hemiancistrus and Hypostomus (J. Armbruster); vandelliins (M. de Pinna); and several genera of Chinese sisorids (W. Zhou). Given the lag time for large collaborative projects such as All Catfishes, it is reasonable to expect the number of new species of catfishes to reach a total of 800-1,000. For more information, see the ACSI project’s website: silurus.acnatsci.org.