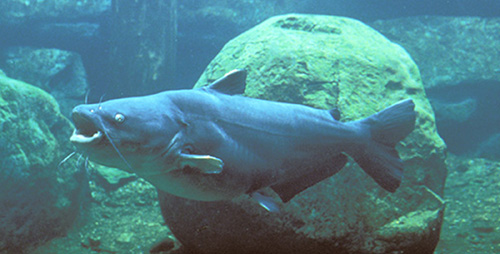 Identification: The Blue Catfish has a long, straight-edged anal fin that is tapered like a barber’s comb and has 30-35 rays. Blue Cats are pale blue to olive on the back and sides, white below and lack dark spots on the body (except in the Rio Grande where they have dark spots). Fins are clear or white except for the caudal fin which has black or dusky borders. Chin barbels are white. Adults have a steeply sloping dorsal profile and are blue-black above and silver-blue below. The air bladder has paired lateral chambers and a posterior chamber. To 65 in. (165 cm) total length.

Range: The Blue Catfish lives in the Mississippi River basin from western Pennsylvania to southern South Dakota and from the Platte River, from southwestern Nebraska south to the Gulf of Mexico. Along the Gulf Slope from the Mobile Bay drainage in Alabama to the Rio Grande drainage in Texas and New Mexico and south into Mexico, Guatemala, and Belize. The Blue Catfish has been introduced in Atlantic Slope drainages, western states and Minnesota. It is fairly common throughout most of its range.

Habitat: The Blue Catfish lives in the main channels and backwaters of medium to large rivers over mud, sand and gravel, and in large-river impoundments.