Tell Me About: Citrus Greening in Florida

Citrus greening is a citrus plant disease that is spread by an insect called the Asian citrus psyllid. The psyllid eats the stems and leaves of the plants and infects them with bacteria, making the trees produce fruits that are green, misshapen, and bitter.

Once a tree is infected, there is no cure, and it will typically die within a few years. Citrus greening affects many different plants including grapefruits, lemons, limes, and oranges to name a few.

Florida is the largest producer of oranges in the U.S, and the third-largest producer in the world. The Florida citrus industry has been put in a very risky situation due to citrus greening.

In a survey of 76 citrus grove owners and producers in Florida, UF IFAS found that the average percentage of infected acres (meaning at least one tree on an acre is infected) on their operations was 90%. The respondents also estimated their citrus greening-related yield loss was about 41% on average.

The graph below shows citrus growers’ response to estimating the percentage of their acres that are infected. 100% indicates at least 1 infected tree in each acre. 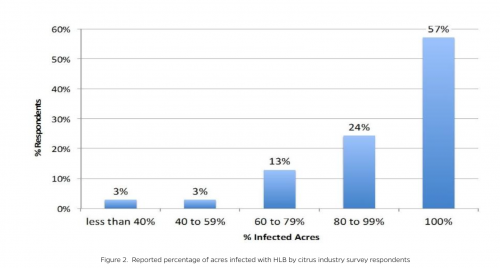 This disease is not Florida specific, it has caused problems all around the globe. A 2012 UF IFAS study estimated that citrus greening cost Florida an estimated $3.63 billion in lost revenue and 6,611 jobs in a six-year span.

On the bright side, researchers at UC Riverside have found a possible solution in the Australian finger lime, which is a fruit resistant to citrus greening. When peptides from the finger lime are injected into sick trees, the treatment helps kill bacteria and boosts the tree’s immune system.

What You Can Do