These environmental impacts – which are becoming more and more prevalent – are the result of climate change, said Libby Carnahan, a Florida Sea Grant agent with the University of Florida Institute of Food and Agricultural Sciences Extension in Pinellas County. Since its burdens will influence more than just our natural resources, she said it needs to be looked at through different lenses.

“Climate change has obviously been framed as an environmental issue,” she said. “So now we’re trying to frame it more as a people and economic issue to get people to care about it.”

According to the U.S. Energy Information Administration, as of 2017 Florida was third place for the amount of carbon dioxide it emits into the atmosphere, next to Texas and California. The state’s carbon dioxide emissions rose by 21% from 1990 to 2017, though they saw a 0.5% decrease between 2016 and 2017.

As continuing research reveals oftentimes harrowing projections for the future of Florida, the state is attempting to catch up with climate change and its impacts through proposed legislation: 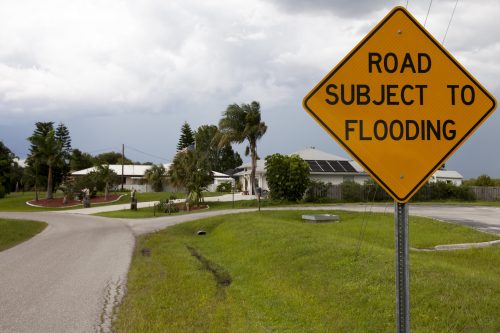 Two identical bills titled “Resiliency,” focus on how the state will respond to climate change impacts, like sea level rise. SB 514, introduced by Florida State Sen. Ray Rodrigues (R) and HB 315, introduced by Florida State Rep. Chip LaMarca (R) would create a statewide Office of Resiliency within the Governor’s executive office, which would be headed by a Chief Resilience Officer.

This legislation also forms a Sea Level Rise Task Force that would recommend projections of expected sea level rise and flooding impacts along Florida’s coasts. Since our atmosphere is warming, these hotter temperatures cause the ocean water to expand and glaciers on Earth’s poles to melt. This leads to rising sea levels in coastal areas, including Florida’s 8,435 miles of coastline, as well as other threats like extreme heat and increased wildfires and droughts.

Florida appointed Julia Nesheiwat as its first Chief Resilience officer in the summer of 2019, but her resignation only a few months later has left an absence in that position ever since. Her departure resulted in the shift of her responsibilities to the current head of the Florida Department of Environmental Protection, Noah Valenstein. But critics of the responsibility shift said resilience shouldn’t be a part-time job.

“With just the sheer size of Florida and the great challenges Florida confronts in sea level rise and climate change, I think that position merits someone entirely dedicated to it,” said Thomas Ruppert, a Florida Sea Grant attorney and coastal planning specialist.

While he commends the proposed legislation for officially writing this position into statute, which would hopefully get the various state agencies “on the same page with regard to climate change,” Ruppert acknowledged some concerns stemming from the Sea Level Rise Task Force created in the resiliency bills.

As detailed in the bills themselves, this team is tasked with making “recommendations on consensus baseline projections…of the expected rise in sea level along the state’s coastline.” These projections, once submitted and approved by the Environmental Regulation Commission, would “serve as the state’s official estimate of sea-level rise and flooding impacts…and must be used for the purpose of developing future state projects, plans, and programs.”

“What does that mean?” Ruppert asked about the vague language, referencing its potential jurisdiction over applicable current and future projects. “There’s just hundreds if not thousands of ways that this raises questions about what it really means. And I think that could be spelled out more clearly in this bill.”

He said the legislation also raises questions about its potential conflict with existing projections already utilized on local levels, like in Miami. Jim Murley, the chief resiliency officer for Miami-Dade County, said that his region of Florida has been conducting this research and implementing the findings for more than 10 years. Local scientists already use international and national climate projections to create a unique look for the future of South Florida. He wouldn’t want a statewide projection that preempts their own regional projection, he said, although he’s open to working more with the state regarding this topic.

“That’s sort of what we think works, but we also want to be a part of a larger statewide effort as long as we can maintain that investment we’ve made in that process,” Murley said, adding that he welcomes any new recommendations from the state for improvement. “I wouldn’t say we’ve gotten it all figured out, that’s for sure.”

In January, state environmental regulators unveiled a draft version of the state’s first uniform sea level rise mapping tool. The tool is part of a new law that will take effect July 1 and requires a sea level rise projection study be incorporated into any new state funded projects.

“This will be the first time that we get to establish a uniform signal across the state of what sea level rise projections should be,” Florida Department of Environmental Protection Secretary Noah Valentstein told WUSF News. “It’s really a strong state signal that we’re taking the impacts of climate change seriously.”

Ruppert also noted that the proposed bills don’t specify representation from regional collaboratives, such as the Southeast Florida Regional Climate Change Compact, on the task force. Instead, they detail political appointees from state departments like the Department of Transportation and the Fish and Wildlife Conservation Commission.

“You would hope that they would appoint people with scientific expertise, but that’s never clear,” he said.

These appointments must be made no later than Aug. 1, 2021, according to the bills. Their resulting projections must be submitted no later than Jan. 1, 2022, giving the task force four months to conduct their research and construct their recommendations.

Greenhouse gases are gases or vapors that trap heat in the atmosphere, according to the U.S. Environmental Protection Agency (EPA). An abundance of greenhouse gases like carbon dioxide, methane and nitrous oxide have led to historical temperature rises in our oceans and atmosphere. In the U.S., the most greenhouse gas emissions come from the transportation, electricity production and industry sectors.

The federal Clean Air Act regulates pollutant emissions across the country, including in Florida. Additionally, the EPA has established the National Ambient Air Quality Standard that regulates maximum levels for six outdoor air pollutants, like carbon monoxide and lead. Florida’s air monitoring is conducted by its Department of Environmental Protection’s air monitoring network that covers 90% of the state’s population.

While some legislation supports efforts to limit greenhouse gas emissions, like by using renewable energy resources in place of nonrenewable ones, the route to achieve that is highly contested. Some fear that proposed changes, like switching from nonrenewable to renewable energy sources, could foster unemployment. And while there are federal rules that broadly regulate emissions, local municipalities can also carry more specific rules that could vary by region, Miami-Dade County Chief Resiliency Officer Jim Murley said. This could make some entities favor a statewide law that umbrellas emissions guidelines.

Murley said he thinks that existing local laws and protocols suffice for his region’s greenhouse gas regulations, although they can always be adapted for improvement. But at just over a page long, the Greenhouse Gas Emissions proposals are what Murley calls a “symbol bill.”

“They’re going to draw attention. They’re going to draw discussion. People will sort of possibly take positions, and maybe the bill passes or doesn’t pass, right?” he said. “But they’ve elevated the issue: How should this [regulating greenhouse gas emissions] happen in the state?”

While the world experienced a temporary drop in carbon-dioxide emissions due to the COVID-19 pandemic, global emissions are still expected to rise in the coming years. The Center for Climate and Energy Solutions projected that by 2025, U.S. emissions could be 14% to 18% below 2005 levels, which it calls “far short of what is needed to address climate change.” Currently, 24 states have greenhouse gas emissions targets established; Florida does not.

Another hot topic regarding climate change in Florida is Gov. Ron DeSantis’ announcement of the creation of Resilient Florida, a $1-billion four-year program that will give grants to state and local governments to “fund projects to adapt regionally significant assets to address the impacts of sea level rise, intensified storms and localized flooding.”

The program is established within the Governor’s recommended budget for fiscal year 2021-22, which tops $96.6 billion in total and allocates $4.3 billion to “protect our environment, agriculture and natural resources,” according to the governor’s Florida Leads website. If the legislature approves this budget, Resilient Florida will “use revenues from the state documentary stamp tax to pay for the debt service on $1 billion in bonds,” according to the Tampa Bay Times.

The resulting bonds work like this: The program will issue money up-front for a certain project so a municipality can start construction right away. This money, plus interest, will be paid back to the state by that municipality over a certain timeframe.

Murley said in his experience, while this process of bonding hasn’t been utilized in a long time in Florida, it used to be commonly used in South Florida: “We would bond $300 million every year.”

As long as it doesn’t threaten the state’s economy, he said bonding seems like the right path to follow for climate-related projects that need to be started as soon as possible.

“We’re building things that are going to benefit the future citizens of Florida, and the fact that they’re helping to pay for that through their taxes that help pay off bonds, makes a lot of sense to me,” he said.

UPDATE: Upon finalizing and approving the budget, both chambers agreed to set aside $500 million for the Resilient Florida Trust Fund.

Several bills this 2021 legislative session appropriate, or set aside money for, climate change and resiliency-focused projects and initiatives across the state. They include: 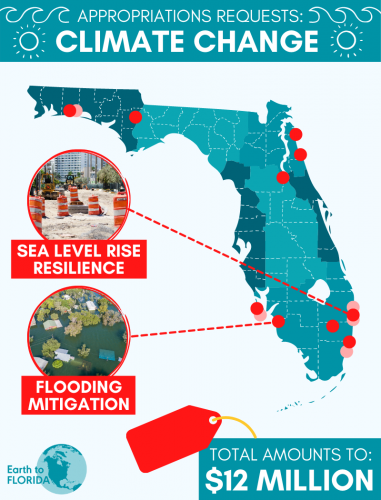