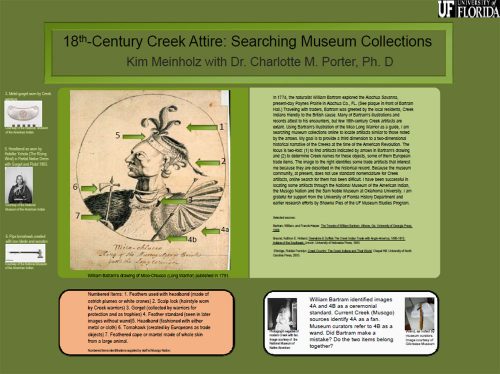 In 1774, the naturalist William Bartram explored the Alachua Savanna, present-day Paynes Prairie in Alachua Co., FL. Traveling with traders, Bartram was greeted by the local residents, Creek Indians friendly to the British cause. Many of Bartram’s illustrations and records attest to his encounters, but few 18th-century Creek artifacts are extant. Using Bartram’s illustration of the Mico Long Warrior as a guide, I am searching museum collections online to locate artifacts similar to those noted by the arrows. My goal is to provide a third dimension to a two-dimensional historical narrative of the Creeks at the time of the American Revolution. The focus is two-fold: (1) to find artifacts indicated by arrows in Bartram’s drawing and (2) to determine Creek names for these objects, some of them European trade items. Because the museum community, at present, does not use standard nomenclature for Creek artifacts, online search for them has been difficult. I have been successful in locating some artifacts through the National Museum of the American Indian, the Muscgo Nation and the Sam Noble Museum at Oklahoma University. I am grateful for support from the University of Florida History Department and earlier research efforts by Shawna Pies of the UF Museum Studies Program. 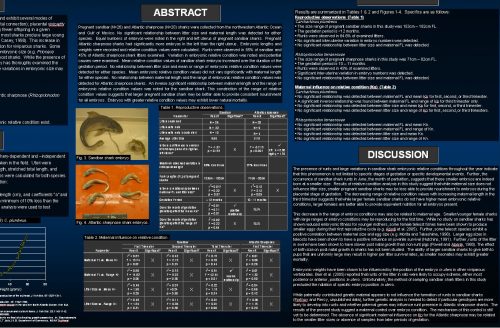 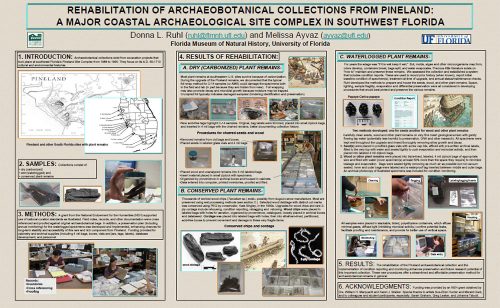 The Pineland archaeobotanical collections relate to a series of excavation projects that took place at southwest Florida’s Pineland Site Complex from 1988 to 1995, that focused on its A.D. 50-1710 cultural and environmental histories. The collections consist of dry, wet (waterlogged), and conserved plant specimens. Following many years of extensive research, this component of the Pineland collection was returned to the Florida Museum with the goal of comprehensive curation. A grant from the National Endowment for the Humanities awarded to the Florida Museum is supporting the curation of Pineland collections including the often overlooked plant materials. To this end, a major focus is on the long-term care and condition-reporting necessary for the plant materials, especially the specimens of waterlogged seeds and wood as well as the conserved wood chips and cordage. Project methods and results follow national standards and are illustrated with multiple images. In addition, a monitored programmatic plan for the preservation of waterlogged specimens has been developed and is highlighted here. Ultimately, this project will greatly improve the long-term stability and accessibility of these rich and rare archaeobotanical collections from Pineland. 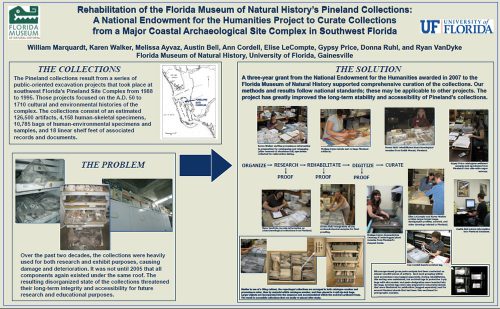 Rehabilitation of the Florida Museum of Natural History’s Pineland Collections: A National Endowment for the Humanities Project to Curate Collections from a Major Coastal Archaeological Site Complex in Southwest Florida.

The Pineland collections result from a series of public-oriented excavation projects that took place at southwest Florida’s Pineland Site Complex from 1988 to 1995. Those projects focused on the A.D. 50 to 1710 cultural and environmental histories of the complex. It was not until 2005 that all components again existed under the same roof. A three-year grant from the National Endowment for the Humanities awarded in 2007 to the Florida Museum of Natural History supported comprehensive curation of the collections.