Parahippus appears to be the evolutionary “link” between the old forest-dwelling horses and the modern plains-dwelling grazers. It has 3 toes, like primitive horses, but the side toes are smaller. They are “horse-faced,” or long-headed with the eye socket well back from the middle of the skull.

Fossils of Parahippus are found at many early Miocene localities in the Great Plains and Florida. Species in this genus lived from 24 -17 million years ago.

Why did Professor Leidy name this animal “the side horse?”

The name Parahippus implies its “side” toes (it was a three-toed horse). However, in 1858 Professor Leidy only had some teeth of this animal. Unfortunately, Leidy didn’t explain why he called it “Parahippus.” The name may refer to the “side” branches of the posterior crest of the upper molars that he noted. This feature differentiated it from species of Anchitherium. 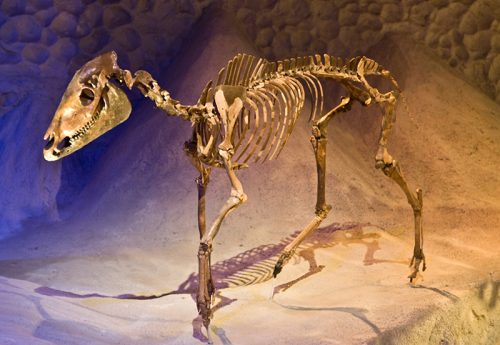 Some species of this remarkable German Shepherd-sized horse developed teeth that were tall, or “high-crowned.” High-crowned teeth may have permitted this horse to have some grass in its diet. Because grass is an abrasive food that wears teeth down, short teeth in grass-eating animals would result in an early death from starvation.

Other advancements in the teeth include the development of cementum, a protective coating of the teeth, and the molar ridges characteristic of the modern horses.

Parahippus leonensis is the most commonly found fossil at Thomas Farm, an 18-million-year-old early Miocene locality in Florida. It is an important species because it is believed to be a close relative to the group from which modern horses evolved.