Horses disappeared from Europe in the Oligocene, but persisted in North America. Many other ancient mammals of the Eocene died out while the perissodactyls — horses, rhinos, the rhino-like titanotheres — became more diverse.

The titanotheres are extinct relatives of horses, rhinos, and tapirs. Some titanotheres became quite large; the titanothere Brontops, reconstructed at right by the painter Bruce Horsfall, was nearly as massive as an elephant. 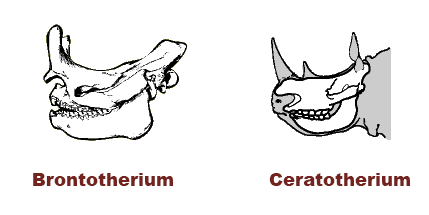 The “horns” of the titanotheres make them resemble rhinos. However, they do not have horns, or even structures of stiffened hair, as in true rhinos, but instead have bony structures covered in thick skin.

Oligocene horses remained fairly small. For example, Mesohippus was only about 2 feet tall at the shoulders.

During the Oligocene, the even-toed ungulates (artiodactyls) became more diverse, with more species than the perissodactyls. Pig-like oreodonts were common artiodactyls in the Oligocene. Their fossils are quite numerous in parts of the Great Plains.

Horses that lived during the Oligocene:

Back to Time Scales Back to Horse Gallery

Banner illustration by Carl Buell. This is a detail from a painting displayed in the Hall of Florida Fossils at the Florida Museum of Natural History.